His Church. Our Experience.
Subscribe
HomeOn MissionFocusTreating Eucharist like fast food? This book can help
On MissionFocusLocal

Treating Eucharist like fast food? This book can help 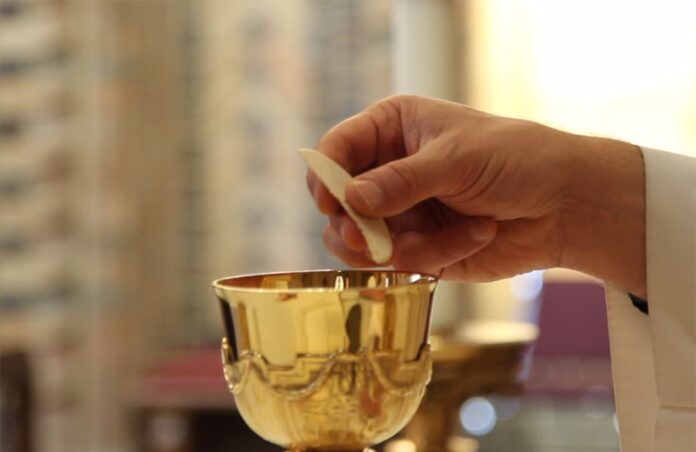 Denver native Francis J. Pierson, 65, is an author, blogger, composer and former cartographer whose previous books explored Colorado’s mining history and Denver’s architecture. His newest book, Word Without End: The Mass – Splendor of the Incarnation is a compilation of essays reflecting on the Incarnation and how that profound work in salvation history can be personally experienced at every Eucharist. Pierson recently spoke to the Denver Catholic about the book. The interview has been edited for clarity and brevity.

Denver Catholic: What is “Word Without End” about?

Francis Pierson: My basic thesis is that the Incarnation and the Eucharist are essentially the same thing. The Eucharist is simply the Incarnation brought into the present time. Every time we’re at Mass we experience the Incarnation just as it happened 2,000 years ago. I think a lot of times for Catholics the Mass becomes kind of mundane and we lose sense of what’s happening—that we’re being pulled into the whole life of Christ: his birth, passion, death and resurrection. His whole life on earth is being re-presented.

DC: Why did you write the book?

Pierson: I didn’t start to write a book, I was writing meditations and it just coalesced. There are 11 chapters and each explores a different aspect of the thesis. I begin with miracles. We’ve lost the sense of the importance of miracles. There are three miracles essential to all of humanity: the Incarnation, the Resurrection and the Eucharist. Other miracles may apply to one person or to a group of people; those three apply to the entire human race and are essential to the human race because without them, especially without the Incarnation, we would not have the dignity we have.

When God became man he raised the stakes for everybody. He gave us a whole new sense of meaning. He not only did that historically, but he does it in the present moment, too. He didn’t want the Incarnation to be something that just happened in the pages of history, he wanted it to be something that impacts our lives every day. That’s why he gave us the Eucharist—so he could be physically, bodily present with us every single day.

DC: You’re not a theologian, why take on such a weighty topic?

Pierson: Those of us who are cradle Catholics often seem to take our faith for granted because it’s familiar. When converts come into the faith and discover the beauty and fullness of it, they catch on fire and want to know everything. It’s exciting to see the discovery they’ve made that changed their lives. I wanted to light a bit of a fire among cradle Catholics.

And I had excellent theological help: I approached Ben Akers (associate professor of theology and assistant dean at the Augustine Institute) with getting an imprimatur. He became my mentor, and Archbishop Samuel Aquila made him the contact person to review the book theologically. It was extremely helpful for me to get Ben’s input.

DC: What does an imprimatur mean?

Pierson: Literally, imprimatur means “let it be printed.” The imprimatur gives permission for the book to be published for general use. You could call it the Church’s Good Housekeeping seal of approval. There’s also the term, nihil obstat, which means there’s “no objections” to the book. The book has both a nihil obstat and an imprimatur.

DC: What is it you hope people take away from the book?

Pierson: A deeper appreciation for the Eucharist; I hope it gives people a deeper reverence, respect and awe for the Catholic liturgy. Often Catholics don’t seem to appreciate the great gift they’ve received. Some receive Communion, walk out the door and are gone. Communion is supposed to be an intimate encounter with God. God isn’t a fast food operation: you can’t have an intimate encounter if you drive up, grab your (Eucharist) and go. God is supposed to be someone we develop a close, personal relationship with. He gives us every opportunity to do that in the Eucharist. It isn’t something we just take, it’s something we become a part of and we need to give back, because that’s how love works. It can’t just be received; it also has to be given. Love begets love.

Pierson: In the Jewish tradition, the Passover meal is not just a memory of Moses leading them to freedom. For the Jews it’s a true reenactment. Every time they celebrate the Passover they are there. We need to have that same understanding with the Eucharist; we are not just remembering Christ’s life, death and resurrection, but reliving them. The Eucharist is the most real thing in our lives.

We get to be part of that story, salvation history—His-story. By virtue of our baptism we are made part of it. It’s a tragedy to lose sight of that. History is always in the present tense. As Christians, that should be our understanding.