His Church. Our Experience.
Subscribe
HomeLocalTOT: Christ came to save all of it, or he came to...
Local 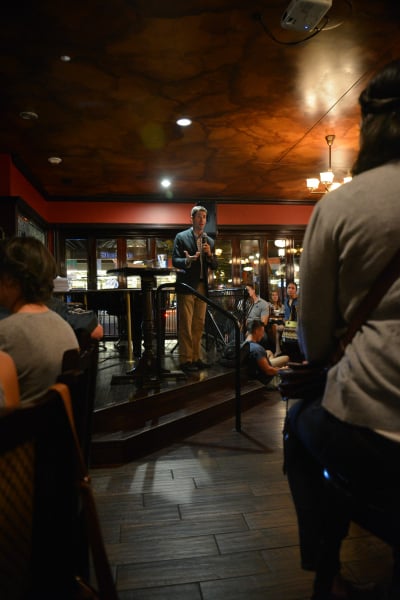 Scott Powell kicked off this year’s first Theology on Tap with a discussion about Pope Francis, Laudato Si’,and the environment.

Theology on Tap is a monthly event hosted by the Office for Evangelization and Family Life. Each month, young adults are invited to come to Katie Mullen’s pub on 16th street to enjoy fellowship and listen to a Catholic speaker.

Powell drew from the Catechism, which  man should be in harmony with God, himself, fellow man, and creation.

For this reason, Powell said that environmentalism is absolutely a Catholic concern.

Powell said the heart of Laudato Si’ is that Catholics, in particular, have a relationship with matter, especially because of the teaching that Jesus will come back and recreate this Earth, instead of pulling all the faithful into a cloud-filled Paradise.

“Christianity believes in what’s called a New Heaven and New Earth. If you read through the Scriptures, there is almost nothing about human beings going off someplace when they die,” Powell said. “What you always read about, rather, is Heaven coming down.”

Powell said that though Christ will re-create the entire world, it will still be made out of the material of the current world.

“Jesus Himself took on human flesh to redeem these bodies, so that he could raise them up. And if that’s true, we can take it to the next logical step, which is that he didn’t just come to redeem me and you, he came to redeem all of it,” he said.

Powell said that this can come across as a “hippy” notion, but it is in line with the Church’s teaching on redemption, the four harmonies, and the sacraments, especially the Eucharist.

“Those of us who are Catholic are better poised for a seat at the table of the environmental conversation than anyone else in the world, because Catholics have learned, have had it drilled into our heads, that the material world matters,” Powell said.

Powell also said the four harmonies come with a hierarchy.

“Our relationship with God has to be first. That’s fundamental. That’s what shapes everything. But when we don’t live out those other relationships, we damage something.  If I don’t care about my water usage, or when I throw trash on the side of the road, or when I don’t really care about energy or any of the things that are going on around me, ultimately, what the Holy Father said, is that the poor are going to pay the price for what I didn’t think about. There’s someone at the bottom of that food chain, or that water chain, or that energy chain, or that waste chain. It’s going to affect the poor and most vulnerable,” Powell said. “When we only see ourselves, we become our own gods, and we become idolatrous.”