To Know, Love, and Serve: Christ in the City to Expand to Philadelphia 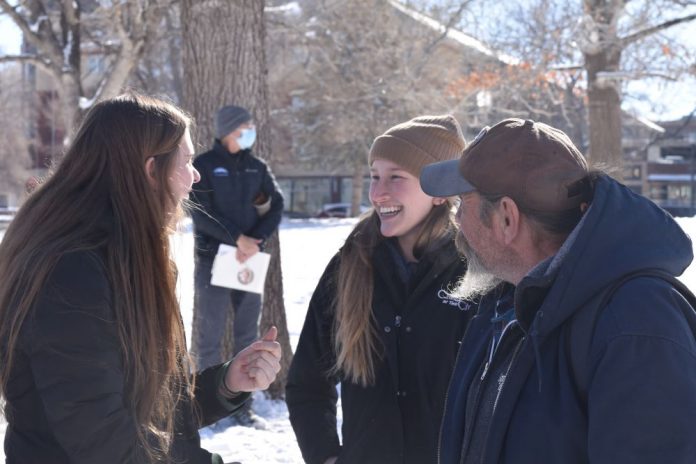 “They show us that hope is not a dirty word,” said one now formerly homeless friend of Christ in the City.

In fact, this is a result of encountering the poor and homeless, which is at the very core of the mission of Christ in the City. “We consider the person’s relationships the most basic need for those on the streets,” said Philip Couture, Deputy Director of Formation at Christ in the City. “The homeless need the same things we do: food, shelter, and yes, loving relationships. Unfortunately, this is often overlooked, making it one of the greatest poverties on the streets. Our missionaries experience the call to give of themselves to those they encounter on the streets, and they view those they befriend as a gift.”

This is the very mission that Christ in the City is excited to bring to Philadelphia, Pennsylvania, for their second year-long program.

“We’ve been in Denver for twelve years now and have learned a lot about the heart of our mission and that it’s needed in places other than Denver,” said Blake Brouillette, Managing Director of Christ in the City. “Since the beginning of the program, we’ve had dioceses reach out to ask us to expand to their cities. It was important, though, that we were ready, had done the prep work, and that it was something from the Holy Spirit.”

Christ in the City has spent a significant amount of time discerning that last point: the will of God for the program and mission. Longtime supporters of Christ in the City might recall an early expansion to Colorado Springs around 2013 that was closed soon after. “The ministry was excellent and the work on the streets was fruitful, but this was an exploratory period of the program, to find out what CIC was meant to be, to build up the program and the spirituality. We learned a lot from that expansion, focused on one program, built it up to what it is today, and now feel this is the right time to expand beyond Denver,” said Brouillette.

When it became clear in their discernment that Christ in the City was ready to expand, Philadelphia was an obvious choice, said Couture. “Roots there from three-week summer missions, fruitful street ministry, and the reception from the community and the archdiocese all made sense. Then the Holy Spirit made it clear.”

Maria Bilello, a Formator at Christ in the City, confirmed Couture’s estimation. While a missionary at Christ in the City, Bilello led one of those summer missions in Philadelphia and would later return to the city as a staff member. She will be among the team spearheading the expansion. “I am incredibly excited to be embarking upon this adventure of expansion. I’ve desired to be a part of a CIC expansion since my first year as a missionary and I am so grateful and humbled to see God fulfilling that desire,” she said.

When asked about the dynamics of the Philadelphia mission, Bilello shared, “Philadelphia is special for so many reasons. There is a large homeless population in Philly, and while there are many resources, there are not many people encountering the homeless on the streets. I also believe there is a great need in the Northeast for our mission of encounter. The Northeast tends to be very success-driven, fast-paced, and individualistic. This can lead people to disregard one another, to not take the time to truly see the person in front of them. At Christ in the City, we strive to create a culture of encounter where each person is seen, known, and loved. My hope is that we can foster this culture in Philly.”

“We empower our missionaries and volunteers to serve and face the spirit of poverty, to foster a culture of encounter, whether with the homeless, their church communities, or their families,” said Brouillette. “Our emphasis and dedication are on the missionaries and greater community to be life-long missionaries.”

In fact, many alumni of Christ in the City take this emphasis to heart, serving in various capacities in the Archdiocese of Denver and beyond: in parishes and the Curia, in Catholic Charities and other local direct-service organizations, in Catholic schools, in the seminary, and beyond.

Brett Rotz, a seminarian for the Diocese of Helena at St. John Vianney Theological Seminary in Denver, is just one such example, having served as a summer missionary in Philadelphia, an experience he remembers fondly. “There is still a part of my heart that is playing ping-pong with John at Love Park, talking with Clarence while he makes money to visit his mom, crafting our dream food truck menu with Pedro, and sitting on the sidewalk eating a 99 cent Frosty with Mark,” he said. “While I had my own desires and goals that I was pursuing at the time, Jesus had a much greater plan in store for me, and I am very thankful for my time in Philly for giving me the ability to hear his call to be his priest for the Diocese of Helena. Christ in the City aims to know, love, and serve the poor, but what a gift it was to be known, loved, and served by the friends we made in the ‘City of Brotherly Love.’”

“We are so grateful to the larger Denver community, to Archbishop Aquila, the priests, deacons, and laypeople of the archdiocese, and so many others for their support, encouragement, and prayers for this program. They have helped us and joined us in touching the lives of so many, even around the world, through their generosity and kindness,” Brouillette said.

Christ in the City’s Philadelphia expansion will begin with the new missionary year in August 2022.

For tips on how to encounter the homeless in your everyday life, visit https://christinthecity.org/tips/.

André Escaleira, Jr.
André Escaleira is the Digital Media Specialist for the Archdiocese of Denver. Originally from Connecticut, André moved to Denver in 2018 to work as a missionary with Christ in the City, where he served for two years.
RELATED ARTICLES
Eucharist