His Church. Our Experience.
Subscribe
HomeLocalA time for generosity
Local

A time for generosity 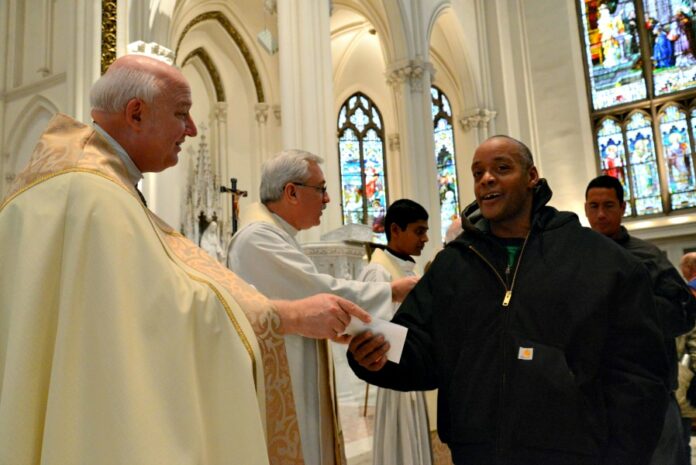 More than 1,500 homeless and needy families lined the pews of the Cathedral Basilica downtown this morning before receiving the spirit of Christ in the form of a cash gift.

The 800-seat mother church in Denver became a scene of compassion and generosity when priests handed cash gifts to the poor for the annual Father Woody Gift Day.

The tradition honors the late Msgr. Charles Woodrich, or “Father Woody,” known for dedicating his life to serving the poor. Anonymous donors provide $40,000 via a trust fund to purchase some $1,000 worth of McDonalds gift certificates for children and pay for security. In the end, almost $30,000 in cash is distributed every year.

Early in the morning, guests stood in line outside the Cathedral Basilica of the Immaculate Conception for a prayer service and homily led by Msgr. Thomas Fryar, pastor of the church.

He challenged those present to “bring the spirit and care of Christ to others.”

After the service, envelopes with two $10 bills were distributed. Outside, the poor were given gloves, scarves and warm drinks.

When asked about what they would do with their $20, Robert Williams, 64, said, “I’m going home then to the grocery store.”

He said he remembered Father Woody whose charity inspired the giveaway that continues to “help a lot of people.”

It was the first giveaway Tex, 31, and Rayvan Swanner, 22, attended.

“We’ve been sleeping under a bridge,” Rayvan said.