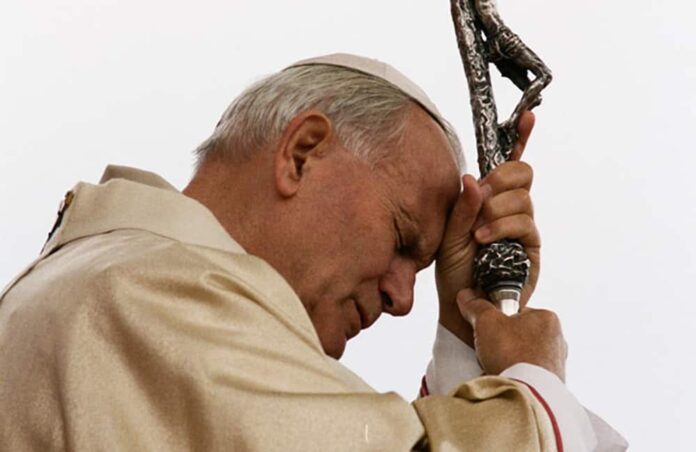 From 1991 until 2005, Cardinal Camillo Ruini served Pope John Paul II as the papal Vicar for Rome – the man who handled the daily affairs of the diocese of which the Pope was, of course, bishop. Ruini was a creative cardinal-vicar who energized the Diocese of Rome for the New Evangelization – a concept he grasped perhaps better than any other Italian prelate. As president of the Italian bishops’ conference, he was committed to John Paul II’s program of “broadening the Tiber:” that is, getting the Italian Church out of its customary entanglements with partisan Italian politics and into the business of Catholic moral witness and the Christian transformation of culture. Had the College of Cardinals decided to elect an Italian to the papacy in 2005, Cardinal Ruini would have made an excellent choice.

I last spoke with the cardinal in October 2019. A few months short of his 89th birthday, he was, as ever, sharp, shrewd, candid, humorous, and well-informed about the Catholic situation around the world. So I was not surprised when Cardinal Ruini took to the pages of the newspaper Il Foglio last month in defense of the pontificate and sanctity of John Paul II, demonstrating that he had lost none of his vigor in the 13 months since we had seen each other. His responses to various attacks on John Paul’s character and competence since the publication of the McCarrick Report are worth recording for an English-language audience.

Why did John Paul II’s beatification and canonization cause begin immediately? Because, Cardinal Ruini explained, more than 80 cardinals had signed a petition to the “future pope” before the conclave of 2005, asking whoever was elected to waive the normal five-year waiting period before a cause begins. The petition was entrusted to Ruini, and the newly-elected Benedict XVI “immediately” agreed with the request when the cardinal, as Vicar of Rome, presented it to him at their first audience.

Why did the cause proceed so rapidly? The process unfolded “with absolute regularity, in compliance with all regulations.” Moreover, reports of miracles – “and what miracles!” – were pouring into the Vicariate of Rome even before the process began. Was the finger of God not to be seen in this?

What does the cardinal say when the holiness of John Paul II is questioned? Those who make this charge are “blinded by preconceptions and don’t know what they’re talking about.” The cardinal went on to discuss his “close contact” with the Polish pope over two decades and how he was “struck from the beginning by the intensity of his prayer: he immersed himself in it…totally…and nothing that happened around him distracted him.”

Was John Paul II an absentee manager who didn’t pay sufficient attention to administration?Not according to his longtime cardinal-vicar. “He carefully chose his closest collaborators” and then put his confidence in them. “At the same time, he had a very high sense of his own responsibility and mission, fully understanding the nature of governance.” Any charge that John Paul II’s management style was “superficial” is “false and deeply unfair: nothing in his way of being or operating was superficial.”

Was John Paul II intimidated by Theodore McCarrick’s exuberance and seeming power? “To think that McCarrick, or even people much more important than him, could intimidate John Paul II is simply ridiculous…..John Paul II was not afraid of anyone on earth….In his choices [John Paul] placed himself before God and made decisions not only in conscience but in the presence of God. All this does not mean that one or another decision could not have been wrong.” (As the decisions regarding McCarrick’s transfer to Washington and his cardinalate surely were). But it does mean John Paul never took decisions “lightly.”

Shouldn’t the Church wait longer before canonizing popes? In measuring sanctity, Cardinal Ruini concluded, popes should be regarded “as far as possible like every other member of the Church, without preferential tracks and without penalties.”

As he got to know John Paul II, Cardinal Ruini came to be “amazed by [John Paul’s] extraordinary ability to forgive.” If life at the Throne of Grace is the perfection of virtues displayed in this life, then St. John Paul II has forgiven his recent detractors: those settling old ideological scores, and those who agree with Agatha Christie’s Miss Marple, that magic and crime both work by getting people to look the wrong way so that they don’t see what’s really going on. Knowing of his forgiveness, perhaps the John Paul II detractors will be moved to a similar generosity of spirit. I’m doubtful. But we may hope.