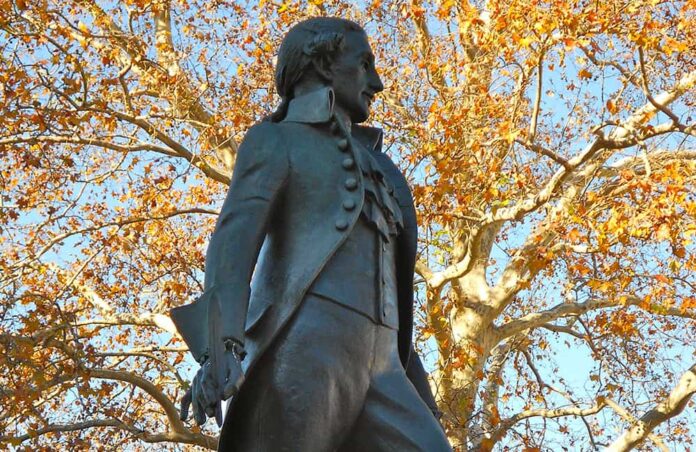 As our nation celebrates the day of its independence and subsequent founding as a country on July 4, a look back some lesser-known Catholic history of this historic event seems warranted.

George Washington, John Adams, Thomas Jefferson, Samuel Adams, Benjamin Franklin: these are names every American knows. Pull out your wallet and you’ll likely see at least one of their faces on the money you carry around. And while this nation was founded on principles rooted in Christianity, none of these men were Catholic. In fact, of the men history calls the Founding Fathers of America, only two were.

Many may already be familiar with Founding Father Charles Carroll, a Catholic and signer of the Declaration of Independence, and whose brother John was the first Catholic bishop assigned to what would become the United States. However, Carroll was not the only Catholic who played a role in the founding of our country. The other was Thomas Fitzsimons, a name that is not mentioned much (if at all) in U.S. history classes but deserves to be recognized nonetheless.

The unwieldy named Records of the American Catholic Historical Society of Philadelphia, published in 1887, paints a vivid picture of Fitzsimons and the way his faith informed his character. While the other Founding Fathers were meeting and deliberating about the Declaration of Independence, Fitzsimons joined the Continental Army and fought on the frontlines against the British army.

Captain Fitzsimons commanded his company of militia until 1778, when France entered the war. British troops withdrew from Pennsylvania and began to focus on the southern states. It was at this time that Fitzsimons became more involved in politics at the state level. In 1782, he became a delegate at the Continental Congress. In 1786, he was elected as a Pennsylvania state legislator and served for three terms until 1789. In 1787, he was selected to represent Pennsylvania at the Constitutional Congress, where the United States Constitution was written and ratified. He, along with Daniel Carroll, were the only two Catholics to sign to Constitution.

Born in Belfast, Ireland in 1741, not much else is known about Fitzsimons’ family. He had three brothers – Nicholas, Andrew and John – and one sister, Ann. He and his family immigrated to America as early as 1760, where they became residents of Philadelphia. It was here that Fitzsimons would stake his claim as a businessman and politician.

In 1763, Fitzsimons married Catharine Meade, whose brother, George Meade, would later go into business with Fitzsimons and build one of the most successful commercial trade houses in Philadelphia. Throughout his life, Fitzsimons was in close correspondence with Bishop John Carroll; these letters revealed insights into the Catholic Founding Father’s personal life. In a letter to Bishop Carroll in 1808, Fitzsimons wrote of being married to Catharine for 45 years. Additionally, local baptismal records show that he and Catharine stood as sponsors at the baptisms of three of Meade’s children.

In 1774, Fitzsimons began his first foray into politics when he was elected as one of 13 Provincial Deputies who were given authority to call a general meeting of the citizens. It is believed he was the first Catholic to have ever held public office in the budding United States. Even so, anti-Catholic bigotry was common at the time and did exist within some of his fellow statesmen, such as John Adams, who once said in an address to the people of Great Britain that the Catholic faith was “a religion that has deluged your island in blood and dispersed impiety, bigotry, persecution, murder and rebellion through every part of the world.”

Fitzsimons’ first stint in public office was brief, only lasting from May to July, but it was a foreshadowing his future involvement in state affairs. As the Revolutionary War broke out in 1775, Fitzsimons formed a company of soldiers to fight against the British army. He was assigned to the Third Battalion under Col. Cadwalader and Lieut. Col. John Nixon, who was the grandson of a Catholic. Behind the scenes, as George Washington and the like organized committees and framed what would become the Declaration of Independence, Fitzsimons ascended to the rank of Captain and continued to serve his country as a soldier and patriot.

In addition to his tenure as a commanding officer and politician, Fitzsimons also found success in other ventures. In 1781, he helped found the Bank of North America, the United States’ first de facto central bank, and served as its director until 1803. The latter years of his life were spent primarily in private business, but he maintained a consistent interest in public affairs; even Fitzsimons wasn’t exempt from the old adage, “once a politician, always a politician.”

Through all of these endeavors, and even after befalling troubled financial times in the early 1800s, Fitzsimons remained a diligent philanthropist. He gave immense support to St. Augustine’s Catholic Church in Philadelphia and was invested in the improvement of public education in the commonwealth. As one of his contemporaries wrote after his death in 1811, “he died in the esteem, affection and gratitude of all classes of his fellow citizens.”

Fitzsimons was buried in the graveyard of St. Mary’s Catholic Church in Philadelphia, which is now part of Independence National Historical Park. His name may not be a household one like Washington or Jefferson, but Fitzsimons can be remembered as something of an unsung Founding Father of the United States; a man whose life of quiet faith, humble service and admirable patriotism exemplifies the values that this country was founded upon in a simple yet profound way.