His Church. Our Experience.
Subscribe
HomeEducationBoulder's Great Debate: 'This is what a university should be'
Education

Boulder’s Great Debate: ‘This is what a university should be’ 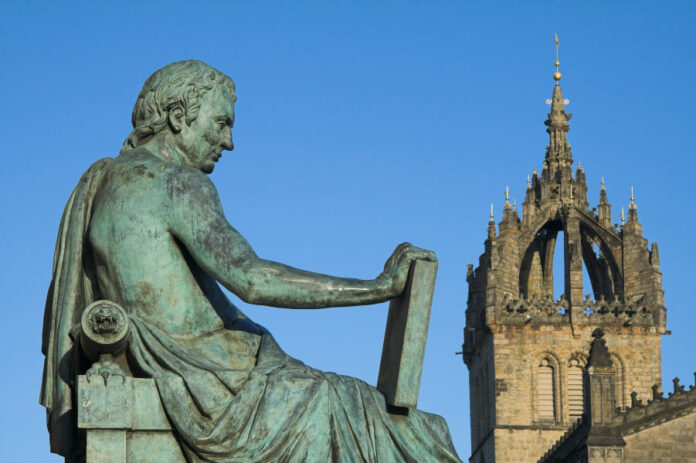 University of Colorado-Boulder (CU) prides itself on academic excellence, earning national rankings in fields as diverse as ceramics and quantum physics. It also contains a unique cultural influence, due to its prestige and ranking as the number one college town in America. Scott Powell, the director of CU’s Aquinas Institute of Catholic Thought, says he wants the Catholic Church to have a voice in this milieu.

“My goal is for the university at large to see that the Catholic Church is serious about engaging intellectually,” Powell said.

Each year, Powell organizes a “Great Debate” between a Catholic theologian and faculty professor. Past debate topics have included same sex marriage, abortion and physician-assisted suicide. This year’s topic was “Religion: Good or Bad for Society?”

Dr. Michael Huemer, a tenured philosophy professor at CU with a doctorate from Rutgers and several published works, argued that it is not. Arguing for religion was Dr. James Gaston, a theology professor at Franciscan University of Steubenville, who founded the Humanities and Catholic Culture major at that school.

Huemer, an agnostic, said he thought it would be “interesting and entertaining” to debate someone with a different view of the world.

“I am a philosopher. Philosophers argue all the time about what is true. That’s pretty much our job. And of course, when you argue, you do it with someone who has a different view! You can’t just talk to people with the same view,” Huemer said.

Each debater had 20 minutes to present their argument, followed by 10 minutes each of rebuttal. Each debater was then allowed to ask the other one question, followed by 25 minutes of questions from the audience. The debate concluded with each professor giving five minutes of closing remarks.

Not only good, but essential

Gaston opened the debate by arguing that religion is not only good for society, but essential.

“Every human being by their very nature must search for the meaning of life. Each must search for truth, self-knowledge. We differ on which idea happiness we think persists, but we search, nonetheless,” he said.

Gaston defined religion as a “generic term for the search for happiness.” He divided religion into two categories: Those that believe happiness is to be found in the spiritual realm, and those that are focused on some aspect of the material realm. He then defined society as “a permanent union of two or more persons striving together for a common good by cooperative activity.”

“To have a society, there must be an agreement as to our common goal or end,” he said.

He argued that if a people are seeking happiness in material things, there cannot be a true society. He said that at best, this quest will result in a limited culture, in which all men are divided by some material quality and placed in competition over their ideas for happiness.

However, he said a society seeking happiness in the spiritual  share a “common moral vision of happiness, and a foundational basis for a more inclusive type of society.”

“Men are equal in quality, but not in their cultural happiness. Give us a common end for happiness, and a free will to find our way to it. We adapt our own unique material and context,” he said.

Professor  Huemer  opened his argument by noting the impossibility of judging all the effects religion has on a society.

However, he argued that there was evidence that religion has negative effects on society. For example, religion can make it harder to resolve conflicts, as evidenced in various historical events such as the European wars of religion, and contemporary problems such as Islamic extremists and the Arab-Israeli conflict.

“People are less willing to compromise in ideological or moral conflicts, compared to self-interest conflicts. If it’s just my interests, it’s easier to give up and get along. But if it comes to compromising a belief system, then the chances for resolving conflict decreases,” he said.

He also argued that religion slows intellectual progress. For example, he argued that great minds such as Sir Isaac Newton were diverted from studying nature into studying religious idea systems. In addition, he argued that many religions promote false ideas of how the world works, such as creationism or “magical thinking” in believing that tangible effects are produced by prayer.

Other ways he said religion slows intellectual progress include promoting intellectual vice by encouraging faith over justified belief, acceptance of inconsistencies, and intolerance of intellectual diversity.

He said that religion’s deference to authority can also harm society.

“Most religious systems are based on authority, and you’re supposed to accept beliefs simply because those sources say it,” Huemer said. He then read several passages from Leviticus concerning killing homosexuals and women who have premarital sex.

“People look to this book for moral guidance and I think it’s a completely unreliable source,” he said.

Powell said he was happy to have such a distinguished intellectual as Huemer offering strong arguments against religion.

The event sold out a week in advance. Powell said that while he recognized many of the Catholics in the audience, he was pleased to see people from a variety of faith backgrounds. He was also impressed by the two professors’ knowledge on the subject and willingness to tackle such a sensitive subject.

“Gaston did a fantastic job of showing the intersection between what a society is supposed to be and true culture,” Powell said. “On Professor Huemer’s side, there was a lot that I strongly disagree with, but it was very valuable, especially in showing our students how the world perceives us and our Scriptures.”

After the debate, all were invited to a reception at Drogo’s coffee. Both professors were there, in addition to a professor who had debated for physician-assisted suicide the year before. As students discussed the debate, they seemed unable to pick a clear winner. Powell said he’s fine with that.

“Everybody’s got an opinion on the debate. What that tells me is that everyone is thinking about it, and processing it,” Powell said.

Even though the results of the debate may have been inconclusive, Powell says he obtained his primary objective.

“A Catholic ministry on a university should, ideally, be engaging with the university proper. We want to show the flagship university in Colorado that the Catholic intellectual tradition has something to offer,” he said.

As Gaston said several times throughout the debate, “This is what a university should be.” He frequently praised the event for allowing individuals of different intellectual backgrounds to share their ideas.

In addition, he’s happy to see the rapport the debates are building, creating an atmosphere where previous debaters feel free to come back and engage. Huemer agreed that the tone of the evening was courteous, and said he would do such an event again.

“I thought the debate went very well. Both of us were respectful and we gave the audience plenty to think about,” Huemer said.