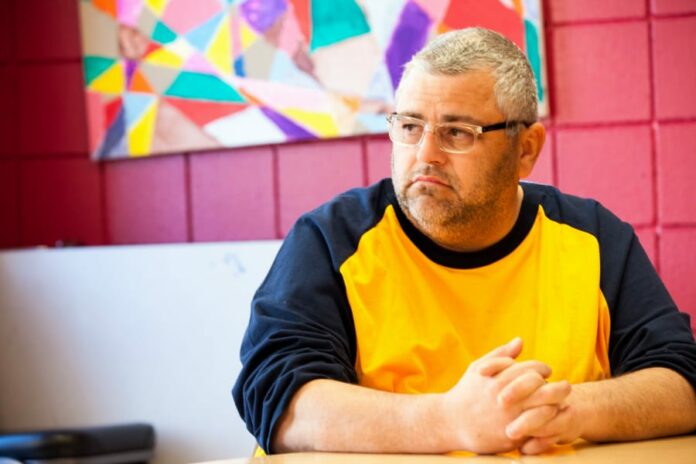 Jessica Gillard comforted her six-week-old son Cassius, not in the comfortable confines of her own home, but in a common area at the Samaritan House homeless shelter.

Gillard is one of many who are forced to live at shelters such as Samaritan House for a temporary period of time due to skyrocketing rental prices within Denver and the surrounding cities.

“It’s extremely hard to find apartments in Denver,” Gillard said. “I was considering transferring out of Denver County to a different county to see if the housing is any better there, but it’s an epidemic everywhere. It’s hard.”

Gillard moved to Denver from Florida in 2013. She lived with her dad for several years before moving out to live on her own in 2015. Rent prices were so high that she had to apply for a Section 8 voucher to help offset the cost of rent. She ended up in an apartment on Stout Street.

Four months into living in her apartment, Gillard lost her job at the Protein Bar. She reported her loss of income to Section 8, but there was never any follow-through on their part. She was evicted from her apartment, which brought her to Samaritan House at the end of November. She was eight months pregnant with her son. Two weeks passed, and Cassius was born on Dec. 16.

Samaritan House requires all of their residents adhere to a 120-day case management program while staying there. This includes attending classes related to employment and money management, regularly submitting “job search” and “housing search” logs, and saving 85% of their income.

Gillard is just now getting back into the job market after having her baby. She’s been searching for housing per Samaritan House’s requirements, but what she’s found hasn’t been very promising.

She said she has an entire folder full of apartments she’s looked at, and almost all of them have no openings for two to five years. The ones that do have vacant units are out of her voucher range, so she’s stuck waiting.

“Am I supposed to be in transitional housing for two to five years before an apartment opens up?” Gillard asked. “It’s nice that they offer these vouchers, but once you have your voucher, the apartments that accept it have no openings for years to come. It’s a bit frustrating.”

Shawn Lovejoy, another Samaritan House resident forced to live there due to the unaffordability of Denver housing, agreed with Gillard. Lovejoy has been struggling to pay for housing in Denver and the surrounding area for the past 10 years. His wife went on permanent disability after their son was born in 2006, and their income dropped by half.

They lived in a two-bedroom apartment in Aurora, for which they paid $1500 per month. However, Lovejoy said that once water, utilities and similar expenses are factored in, it becomes closer to $2000 a month, which they couldn’t afford. They applied for government assistance, but didn’t qualify because they made too much money.

Shawn lost his job, which forced him to dip into their savings in order to live. They lived in a hotel for a while, but that was too expensive as well.

“It got to the point where we had no choice, so we came to [Samaritan House],” Lovejoy said.

Lovejoy and his family have been at Samaritan House since Jan. 3. Samaritan House helped him become employed again in Aurora. He recently started working again and is doing everything in his power to support his family and put his income into savings, but the search for an affordable place to live continues.

Jonathan Ghaly, a Denver real estate agent, attributes the rising housing prices to supply and demand. He said Denver is one of the rare cities in the U.S. that is both desirable and affordable; it’s not as expensive to live in Denver as it is in cities such as San Francisco and New York, and it has a strong and inviting job market, not to mention over 300 days of sunlight per year.

“These factors are leading to lower vacancy rates and high rents,” Ghaly said. “In 2000, rents in Denver averaged $762 a month. Today, they are averaging $1,300 a month. That is a huge increase, but is more evidence for the demand in Denver.”

Geoff Bennett, Vice President of Shelter and Community Outreach Services for Catholic Charities, sees firsthand the devastating effects of rapidly rising rents on people such as Gillard and Lovejoy.

“What we’ve seen lately is a large increase of people getting kicked out of their apartments because of rents being raised, sometimes doubling,” Bennett said. “They weren’t homeless, but they are now. We’re seeing a lot of new homeless who are getting priced out of the housing market.”

Samaritan House used to get only 15 to 20 families looking for a room to stay in when one became open, but Bennett said now they’re getting around 50 families on a consistent basis for every vacancy.

“It’s a significant issue that’s affecting a lot of families,” he said.

Samaritan House is the largest shelter under the Catholic Charities name, but they have several other shelters, including the Father Ed Judy House for women and children and shelters in Greeley and Fort Collins.

The employment center at Samaritan House finds jobs for 50 people per month, Bennett said. They also make sure that any school-aged children are enrolled in school within three days of staying there, and they help find child care if it’s needed.

Bennett said there are plans to break ground in March on their property in Greeley to build 48 new Section 8 units.

“The need is immediate, so it’s definitely something that’s high on our priority list,” he said.

In spite of their circumstances, Gillard and Lovejoy are grateful to be staying at Samaritan House. Samaritan House helped with Gillard’s postpartum care after giving birth, and Lovejoy said it’s great to have a place to stay and live in, as opposed to a walk-in overnight shelter.

They both said the 120-day program is helpful while staying there, but they’re still waiting for answers as to where they’re going to go after their time at Samaritan House comes to an end.

“Samaritan House does offer the program here, but once time runs out and we’re still in the midst of waiting, what is there to do?” Gillard said. “It would be nice to know where we’re going to go.”

“The give us classes and every tool you need to get back out there, but it’s hard, even with all that,” Lovejoy said.