The Two Forties: The Eucharist within quarantine and Lent 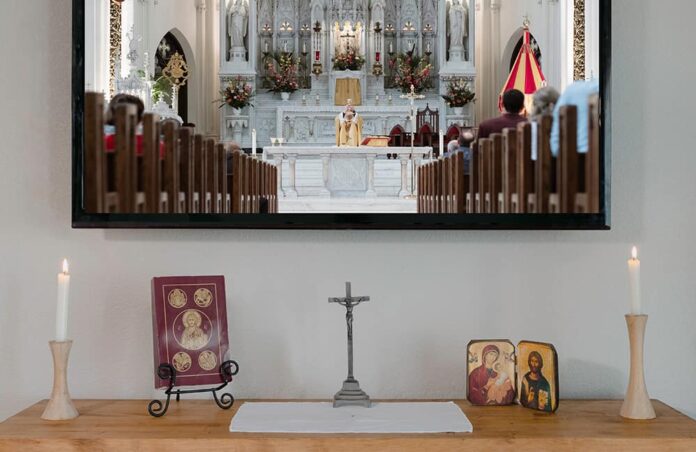 The word quarantine comes from a contraction of the Italian words (in the Venetian dialect) for 40 days, referring to the length of time a ship would have to remain in port during the Black Death. It’s not the only Italian word that refers to 40 days: la Quaresima, the Italian word for Lent, also means 40. Latin and the Romance languages all refer to Lent as “the forty,” the proper length of time needed for purification in the spiritual life, imitating Christ in his own time of prayer and fasting in the desert. Right in the middle of our 40 days, Catholics had to face a different quarantine, adding Mass to the list of their Lenten sacrifices.

Although rare, the Church has cancelled public Masses and funerals in the past, as recently as the 1918 flu pandemic. Chris Gehrz, writing on the website Patheos, detailed the impact of the pandemic on churches in the United States using newspaper articles from the time. The Globe wrote about the “quietest Sunday Boston ever saw,” with “less for the citizens to do probably than on any Sunday since the old Puritan days.” Cities that did not cancel church services saw higher rates of death, leading police to intervene in shutting down one Catholic church in Cincinnati. In Colorado, our Archdiocesan archives point to many heroic priests serving the sick under dire circumstances. One priest, Fr. C.F. O’Farrell, “drove an automobile 76 miles, then rode a horse 14 miles at night, to administer the last rites to a dying miner.”

The sacramental life of the Church also suffered extreme impairment during the Black Death, when priests and monks died disproportionately, at even higher rates than the average 30 percent death rate that struck Europe. Attending Mass was out of the question with civil and ecclesial life in disarray, leading to a crisis so severe that in 1349 the Bishop of Bath and Wells, England, decreed that the dying could confess their sins to anyone as a pious act, even if not sacramental, and Pope Clement VI granted special indulgences to the dying. During a later outbreak of plague, St. Charles Borromeo closed the churches in Milan in 1576, as he distinguished himself by heroic care of the sick.

There are a number of similarities between past and present—as the church doors close, the generosity of Mother Church increases. We see a similar dynamic of heroic ministry in Italy, especially the city of Bergamo, where at least 11 priests have died of the coronavirus from ministering to the sick (and many more throughout the region). Pope Francis has made it easier to receive a plenary indulgence by substituting prayer for the reception of Communion and Confession, and offering this to the homebound, caregivers, the dying, and all the faithful. The Apostolic Penitentiary has pointed out the possibility of general absolution in cases of emergency, such as in hospitals, and reminded us that “perfect contrition, coming from the love of God, beloved above all things, expressed by a sincere request for forgiveness and accompanied by votum confessionis, that is, by the firm resolution to have recourse, as soon as possible, to sacramental confession, obtains forgiveness of sins.”

Ultimately, this time without the Eucharist can deepen our Lenten penance, for there is no greater sacrifice than to be without Mass. In his book, Behold the Pierced One, Josef Ratzinger (Pope Emeritus Benedict) reflected that “fasting from the Eucharist, really taken seriously and entered into, could be most meaningful on carefully considered occasions, such as days of penance.” Ratzinger asks: “Do we not often take the reception of the Blessed Sacrament too lightly? Might not this kind of spiritual fasting be of service, or even necessary, to deepen and renew our relationship to the Body of Christ?” Likewise, St.  Francis de Sales advises us, in his great masterpiece, Introduction to the Devout Life, to strengthen our devotion to the Eucharist, even when we can’t be present at Mass: “If any imperative hindrance prevents your presence at this sovereign sacrifice of Christ’s most true Presence, at least be sure to take part in it spiritually. If you cannot go to Church, choose some morning hour in which to unite your intention to that of the whole Christian world, and make the same interior acts of devotion wherever you are that you would make if you were really present at the Celebration of the Holy Eucharist in Church.”

The Church has weathered many storms in the past. That this crisis has broken upon us within the season of Lent points us even more strongly to the Lord’s call for our purification and renewal, inviting us to grow in our trust and desire for Him.