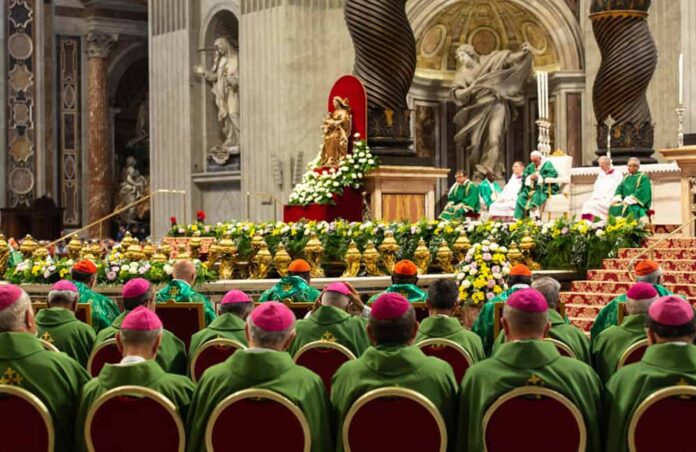 During the 2001 Synod of Bishops, Cardinal Francis George of Chicago, who’d suffered through a lot of synodal speechifying and small-group discussions over the years, made a trenchant observation: “Jesus Christ didn’t intend his Church to be governed by a committee.”

The mechanisms of consultation that exist in the Church — from parish councils through diocesan pastoral councils to the Synod of Bishops — exist to strengthen the governance of the Church by its pastors: priests in their parishes, bishops in their dioceses, the Bishop of Rome in terms of the universal Church. The Synods of 2014, 2015, 2018, and 2019, however, suggest that the committee model deplored by Cardinal George has morphed into something arguably even worse: the masquerade model, in which a “synodal process” of “walking together” provides cover for effecting serious changes in Catholic self-understanding and practice for which there is little or no doctrinal, theological, or pastoral warrant.

In the Final Report of the recent Amazonian Synod, this masquerade model was described in language sodden with clichés:

“To walk together the Church today needs a conversion to the synodal experience. It is necessary to strengthen a culture of dialogue, reciprocal listening, spiritual discernment, consensus and communion to find spaces and modes of joint decision and respond to pastoral challenges. This will foster joint responsibility in the life of the Church in a spirit of service. It is urgent to work, propose, and assume the responsibilities to overcome clericalism and arbitrary impositions. Synodality is a constitutive dimension of the Church. You cannot be a Church without acknowledging an effective exercise of the sensus fidei of the entire People of God.”

Leaving aside the question of how an “effective….sense of the faithful” involving 1.2 billion Catholics could be measured, much less “exercised,” what does this gobbledygook mean? Confusions on that front were amplified by a prominent celebrant of the cult of synodality, whose prose parses but whose grasp of the reality of recent synods seems deficient. Thus Villanova’s Massimo Faggioli, writing in La Croix International, recently made several claims about synodality, none of which stands up to what the courts would call “strict scrutiny” by those actually present in Rome during recent synods:

“…Francis has turned the synods into real events.” Baloney. The synods led by Cardinal Lorenzo Baldisseri, chosen by the Holy Father as secretary-general of the Synod of Bishops, have been at least as orchestrated as their predecessors. And after there was serious pushback to the manipulation of Synod-2014 by the Synod general secretariat, care was taken at the Synods of 2015 and 2018, and at the recent Amazonian regional synod, to ensure that voices potentially disruptive of the Synod-managers’ plans were not prominent among the invited.

“They [the recent synods] have been prefaced by a serious consultation of the faithful at the local level.” Really? Can you, gentle reader, name anyone in your circle of Catholic friends who was seriously consulted about the issues at Synods 2014 and 2015 (the nature of marriage and sacramental discipline)? Leaders of some of the most evangelically successful youth ministries in the United States were noticeably absent from the preparations for Synod-2018. According to several Amazonian Synod spin-doctors, 87,000 people were consulted prior to the development of that synod’s working document. But how can a local Church unable to tell us how many Catholics there are in Amazonia credibly count the precise number of people “consulted” (much less tell us how well-catechized those people are)? And how was it that 87,000 Amazonians spoke in progressive German Catholic accents, emphasizing “issues” that may be agitated in the Biergärten of Munich but that seem somewhat removed from the real-world pastoral challenges of the Brazilian rainforest?

“The actual Synod gatherings….in Rome have featured genuine freedom of expression.” This, I’m sure, would come as news to the African bishops warned against consorting with American bishops at Synod-2018, as it would to the members of the final-report drafting committees at Synod-2015 and Synod-2018, who complained about the manipulation of the process by the Synod general secretariat.

Serious consultation and collaboration are essential to effective pastoral leadership, including the leadership of the Bishop of Rome. But over the 50-plus years of its existence, no one has figured out how to make the Synod of Bishops really work. Propaganda about “synodality” that functions as rhetorical cover for the imposition of the progressive Catholic agenda on the whole Church is not an improvement on that track record; it’s a masquerade, behind which is an agenda.