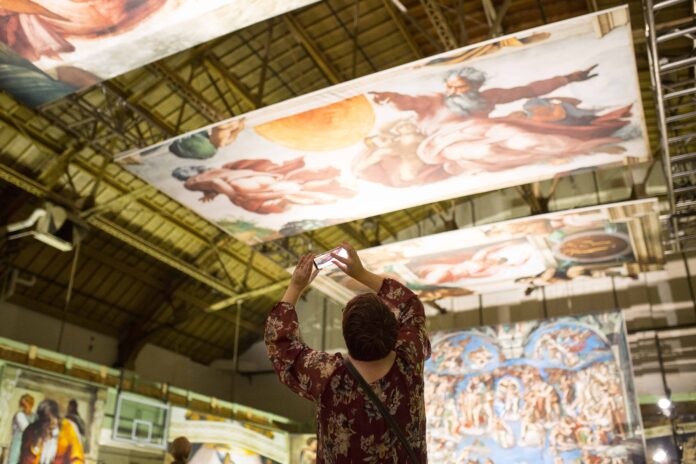 Colorado residents will have an opportunity to gaze upon Michelangelo’s famous works of art — right in their own backyard.

The Sistine Chapel exhibit, coming to the Hangar at Stanley Marketplace in Aurora, offers visitors an up-close perspective of Michelangelo’s work.

“At its max, the Sistine Chapel’s ceiling reaches heights of over 60 feet,” said Eric Leong, Associate Producer at SEE Global Entertainment. “But at our exhibit, you can examine the artwork from mere inches away in some instances.

“It’s as if you have the same view Michelangelo did when he originally painted it.”

Co-produced by the Hangar and SEE Global Entertainment, the exhibit will run from July 4 until August 13.

Tickets can be purchased online or at the door, and group tickets are also available.

“Bringing it to Colorado in a way that’s easily accessible fits right in with pretty much everything we’re trying to do at Stanley Marketplace,” he said.

After visiting the Sistine Chapel during college, Palmer was intrigued but felt that “it wasn’t as intimate as I had hoped for,” he said.

“The biggest thing that I’ve learned since then is how little access you have to see the detail in Michelangelo’s work.”

This exhibit changes the game, offering people the unique chance to see the details.

“The breadth of [Michelangelo’s] work and how many different human figures and expressions he put in the Sistine Chapel is just incredible,” said Palmer. “In this exhibition, you’ll be able to see that and study it from just a couple feet away.”

Both Leong and Palmer emphasized how crucial exhibits like this can be in preserving art and other aspects of history.

“With the recent fire at the Notre Dame Cathedral, we were all reminded how precious our most revered works of art truly are and how important it is to preserve and celebrate them,” said Leong.

“Disasters happen,” said Palmer, “so an exhibition like this really preserves that and makes it something that will last forever.”

The exhibit has already had success in several cities around the world, including Munich, Panama City and Shanghai, and visitors “love being able to absorb the details of the artwork at their own pace in a comfortable environment,” said Leong.

Palmer hopes that will also be the case here in Colorado.

“Art is one of the things that gives meaning to the world, and especially a piece of work like this that really does tell in part the story of humanity,” he said. “I think that’s really powerful.”