The power of the Cross 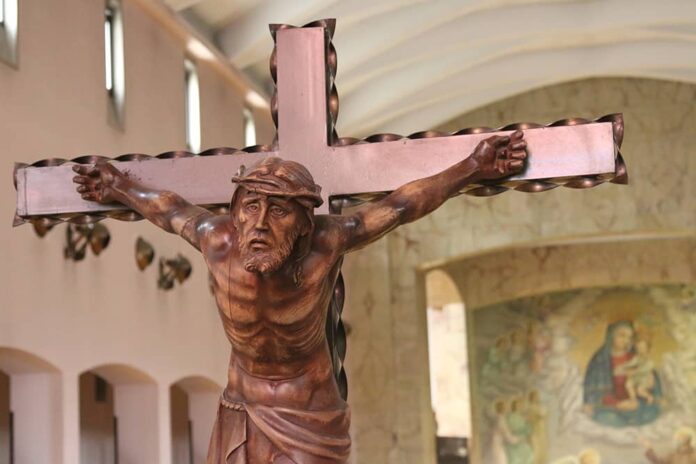 Blessed John Henry Newman (1801-1890) – a theologian who came to prominence in the Victorian Age – can help us check the Church’s spiritual pulse in the post-modern twenty-first century, thanks to his prescient sense of the deep cultural currents shaping (and warping) Western civilization. Thus on August 26, 1832, Newman preached a sermon, “The Religion of the Day,” that bears reflection during Holy Week 2017:

“What is Satan’s device in this day?…What is the world’s religion now? It has taken the brighter side of the Gospel – its tidings of comfort, its precepts of love; all darker, deeper views of man’s condition and prospects being comparatively forgotten. This is the religion natural to a civilized age, and well has Satan dressed and completed it into an idol of the Truth…[Those] fearful images of Divine wrath with which the Scriptures abound…are explained away. Every thing is bright and cheerful. Religion is pleasant and easy….”

Judging from St. Paul’s first letter to the Corinthians, the temptation to reduce Christianity to a comfortable life-style option has been around a long time. Thus Paul insists that he did not come to Corinth to preach “with eloquent wisdom” – human cleverness; no, he came with a message inconceivable to sophisticated (or even not-so-sophisticated) ancients: “Christ crucified,” in whose Cross is found “the power of God” [1 Cor. 17, 20]. Eighteen hundred years later, Newman found the perennial temptation to empty the Cross of its power in the cozy cultural religiosity of his time. H. Richard Niebuhr, closer to our day, saw the same corrosive thing when he pilloried the liberal Protestantism that offered “a God without wrath [who] brought men without sin into a Kingdom without judgment through the ministrations of a Christ without a Cross.”

Against these “idols of the Truth,” this Christian happy-talk, the Cross stands in stark relief.

Attractive crucifixes in our churches and homes should not blind us to the fact that death by Roman crucifixion was unspeakably awful: a naked, flagellated, and bleeding body, nailed to rough wood so that the victim was forced to intensify his agony by pushing himself up on nailed feet in order to breathe. Death could take many hours, even days; finally, the crucified one’s continually weakened and pain-wracked body turned on the victim and asphyxiated him. This was the death meted out to the wretched of the earth. It was not a pretty business, nor was it meant to be. It was a hideous death meant for slaves, a warning of the dangers of challenging Roman power.

Anglican preacher Fleming Rutledge concludes her reflections on the awfulness of the crucifixion with these challenging thoughts, which ask us to understand the Cross in light of the horrors that human beings, under the power of Satan, have perpetrated in history:

“Forgiveness is not enough. Belief in redemption is not enough. Wishful thinking about the intrinsic goodness of every human being is not enough. Inclusion is not a sufficiently inclusive message, nor does it deliver real justice. Only a Power independent of this world can overcome the grip of the Enemy of God’s purposes for his creation. [Thus] Jesus Christ…offered himself to be the condemned and rejected Righteous One…At the historical time and place of his inhuman and godless crucifixion, all the demonic Powers loosed in the world convened in Jerusalem and unleashed their forces upon the incarnate Son of God…”

And the Son, through the power of God, won the victory. For the righteousness of God the Father vindicated the Son’s cruciform obedience in the Resurrection, restoring creation to its right order and inaugurating the Kingdom of God, proclaimed by the Church called into being by the experience of the Risen One and empowered by the Holy Spirit. So the friends of the risen Lord Jesus can say, with St. Paul, “I have been crucified with Christ; it is no longer I who live, but Christ who lives in me; and the life I now live in the flesh I live by faith in the Son of God, who loved me and gave himself for me” [Gal. 2.20].