His Church. Our Experience.
Subscribe
HomeLocalThe mother who said ‘yes’ to God, even in her illness
Local

The mother who said ‘yes’ to God, even in her illness 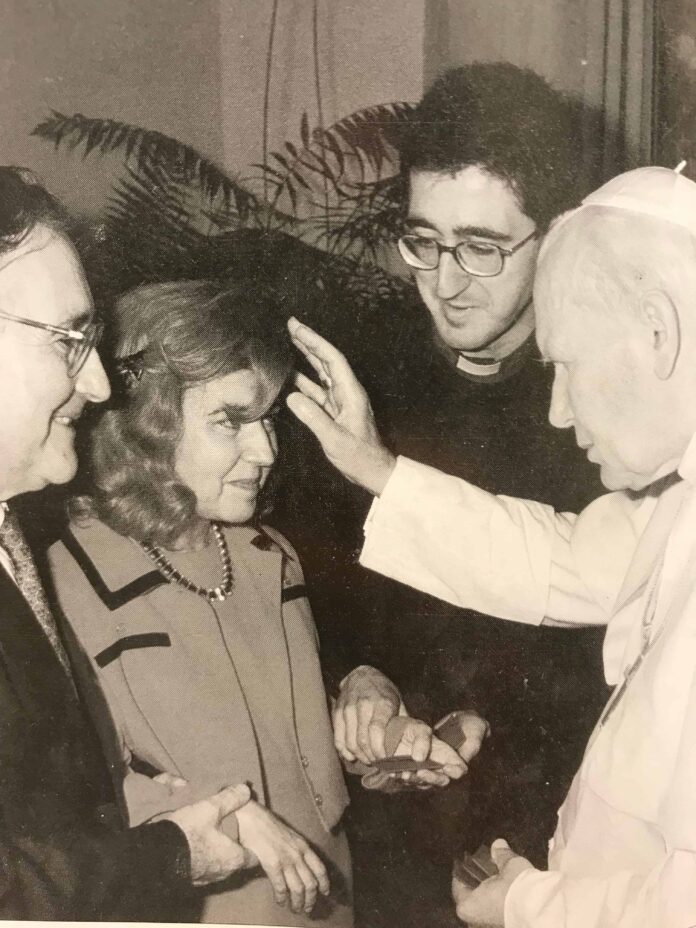 The month of May was made for mothers — the heart of the family, the cornerstone that is many times called to a silent and subtle type of holiness and is appreciated even more when her memory and presence are reflected upon.

Such was the calling of Maria Antonia, Spanish wife and mother of seven children, four of whom are religious priests in the same congregation and three of whom are married and have families.

One of these priests serves in the Archdiocese of Denver: Father Luis Granados, professor at St. John Vianney Seminary, priest at St. Mary’s Parish in Littleton and member of the Disciples of the Hearts of Jesus and Mary religious order.

Maria Antonia seemed to have clear from a young age what Pope Francis says in his new apostolic exhortation Gaudete et Exsultate: “We are all called to be holy by living our lives with love and by bearing witness in everything we do, wherever we find ourselves.”

She was so convinced of this that after meeting her future spouse Eduardo, when she was still a college student, she told a religious sister who tried to convince her to join a religious congregation, “My ideal is holiness, and I believe my holiness consists in forming a family with Eduardo.”

This ideal guided her vocation as a wife and mother, even in her last days, when an aggressive cancer began to paralyze her body.

“In her illness, my mother brought us to life and confirmed us in our vocation,” Father Luis, fifth son of Maria Antonia, told the Denver Catholic. “In a way, my mother taught us the vows of chastity, poverty and obedience before being religious brothers.”

Her husband Eduardo and their children – Father Jose, Eduardo, Father Juan Antonio, Father Carlos, Maria Antonia and Marta – knew that Maria Antonia’s life had been great in its simplicity and decided to capture it in a book titled María Antonia: El corazón de una familia (Maria Antonia: The heart of a family), written by Father Jose, her eldest son.

The life and surrender of their mother was like “a seal” on their vocation, Father Luis said. “She taught us that it’s worth giving and surrendering everything we are.”

As a pharmacist, Maria Antonia listened patiently to the personal problems of people and helped them when she could. As a wife and mother, she was the “magnet of prayer,” Father Luis recalled. “She would say that prayer had many enemies – homework, phone, TV –  but she would bring us together to pray or read the Gospel for at least five minutes every day.”

Her children especially remember the question she asked them that would leave a lasting mark: “Will you be a saint?”

Her final ‘yes’ to God

Born in Madrid, the journey of this pious and generous mother took an unexpected turn at age 51, when doctors found a malignant tumor in her brain and only gave her six months to live.

Little by little, Maria Antonia lost mobility in her arms and legs, and even the ability to talk. In the painful process of letting go of her husband and children, she never complained, but instead surrendered with trust and joy.

“I would love if you discovered the happiness ‘to the fullest’ that I’m discovering,” she wrote to a friend during her illness.

In her journal, Maria Antonia wrote a reflection after her husband’s heart attack, and event that prepared her to accept her own illness years later: “In the beginning [of suffering], you whine to God, you doubt, everything seems like a nightmare, but little by little, you become more familiar with your pain and realize that God wants to admit you into that school of love, the school of saving souls through your suffering.”

“Maria Antonia’s favorite prayer was that of silent submission,” Father Jose writes. “I don’t think she liked wondering why [this was happening] … She simply trusted, accompanied by us.”

“We wanted to comfort her, but she would be the one to comfort us,” Father Luis said.

Since she could no longer say “yes” or “no,” they agreed that an open hand meant “yes” and a closed hand “no.” Nonetheless, when her right hand was paralyzed, it remained open.

Her son Eduardo then said, “Look, my mom left her hand in the form of ‘yes.’” Her husband and children saw Maria Antonia’s surrender to God echoed in that symbol.

“If there is a way to describe Maria Antonia’s death, it’s that she died singing,” Father Jose writes. She passed away on June 3, 1998, accompanied by her husband and two of her sons.

“Now I see that your life was full of ‘yeses,’” her husband Eduardo later wrote. “‘Yes’ to our courtship and to our wedding, ‘yes’ to receiving our seven children, ‘yes’ to giving them up to God… ‘yes’ to all of the good things and ‘yes’ to God when he sent the illness.”

Father Jose remembers overall her questions: “Will you be a saint?” and sees in it the message that Maria Antonia’s life has for all who hear it.

“I hope the remembrance [of her life] stirs again that question for the ultimate goal of our life, so many times put aside, so many times covered in dust: holiness,” Father Jose concludes.