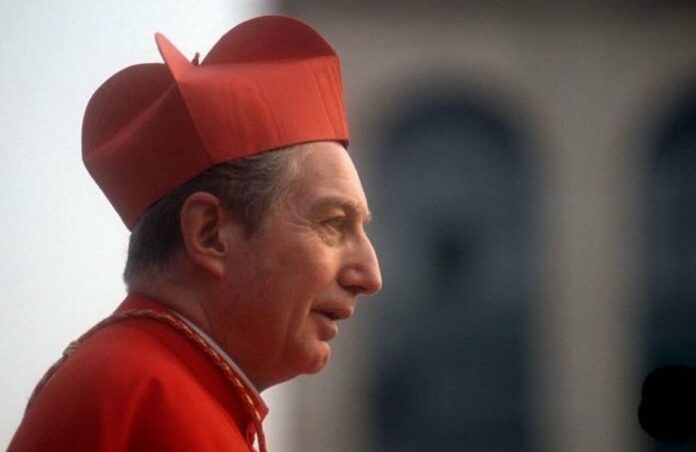 Pope Francis concluded his pre-Christmas address to the Roman Curia by invoking the memory of Cardinal Carlo Maria Martini, SJ, who died in September 2012. The Holy Father recalled that, “in his last interview, a few days before his death, [Cardinal Martini] said something that should make us think: ‘The Church is 200 years behind the times. Why is she not shaken up? Are we afraid? Fear, instead of courage. Yet faith is the Church’s foundation. Faith, confidence, courage … Only love conquers weariness.’”

The Martini Curve should indeed make us think. I thought about it at the time and ended up with questions rather than answers. What, precisely, was the Church two hundred years behind? A western culture come unglued from the deep truths of the human condition? A culture that celebrates the imperial autonomous Self? A culture that detaches sex from love and responsibility? A culture that breeds a politics of immediate gratification and inter-generational irresponsibility? Why on earth would the Church want to catch up with that?

Call me a dullard, but try as I might to adjust my thinking, I’m afraid that’s what I still think about the allegation that Catholicism’s contemporary failures result from our being stuck in a rut behind the curve of history. Moreover, since Cardinal Martini’s death seven years ago, certain empirical facts have become unmistakable: the local Churches that have tried hardest to play catch-up with “history” and “the times” are collapsing.

The premier example is Catholicism in the German-speaking world. Weekly Mass attendance percentages have fallen into single digits in German cities and aren’t much better in Austria and the German-speaking parts of Switzerland. Has this implosion of the sacramental community compelled a rethinking of the strategy of cultural accommodation? On the contrary. With a bullheadedness once caricatured as typically Prussian, the great majority of German bishops support a national “synodal process” that seems determined to put the pedal to the metal of surrendering to “the times,” even if — particularly if — this means jettisoning the truths that, according to both revelation and reason, make for happiness and beatitude.

Is there a single example, anywhere, of a local Church where a frantic effort to catch up with 21st-century secularism and its worship of the new trinity (Me, Myself, and I) has led to an evangelical renaissance — to a wave of conversions to Christ? Is there a single circumstance in which Catholicism’s uncritical embrace of “the times” has led to a rebirth of decency and nobility in culture? Or to a less-polarized politics? If so, it’s a remarkably well-hidden accomplishment.

There is, however, evidence that the offer of friendship with the Lord Jesus Christ as the pathway to a more humane future gets traction.

Shortly after last October’s Great Pachamama Flap, I got a bracing e-mail from a missionary priest in West Africa. After expressing condolences for my “recent Roman penance” at the Amazonian synod (which had featured a lot of politically-correct chatter about the ecological sensitivity of indigenous religions), my friend related an instructive story: “You’ll be happy to know that last year, when one of our villages invited me to come and help them destroy their idols and baptize their chief, we did not, before doing so, engage in any ‘dialogue with the spirits,’ as was so highly praised in the [Synod’s working document]. There was no Tiber to throw [the idols] in, so a sledgehammer and a fire had to suffice. Somehow the village managed to survive without such a dialogue, and in fact they have invited me back … to celebrate the one-year anniversary of the great event, and to bless a cross that will be set up in the village as a permanent reminder of their decision.”

Three weeks ago, the local archbishop wrote those same villagers, telling them of his “immense joy” that, the year before, they had “turned away from idols in order to turn resolutely to the Living and True God … You have recognized in Jesus Christ the Way, the Truth, and the Life. Open wide your hearts to him … and always conquer evil with good.”

There’s no Martini Curve in that part of the global vineyard, it seems. Rather, there is, to borrow from the late cardinal’s last interview, “faith, courage, confidence … [and the] “love that conquers weariness.” That is surely something to think about in the Vatican — and throughout a world Church in which everyone is called to missionary discipleship.