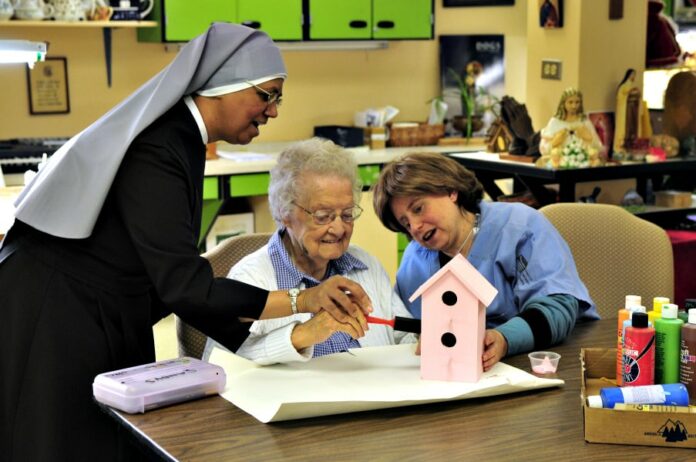 This Lenten Season is going by quickly, and with Easter being so early this year, I want to wish all of you a very blessed Holy Week and Easter!  You will all be in my heart and prayers as we journey with the Lord through his passion, death and resurrection. My heart is filled with gratitude for you and the many blessings the Lord has bestowed on the Church of Northern Colorado.

And yet, the Little Sisters of the Poor, who serve the elderly in our archdiocese through their ministry at Mullen Home, are arguing their case before the United States Supreme Court during Holy Week. They are asking the court’s justices to overturn the government’s HHS mandate that would force them to violate their consciences.

If you haven’t followed the Little Sisters’ case, it involves the Obama administration insisting that the sisters facilitate contraceptive and abortion-inducing drug coverage for their employees. Under the government’s current regulations, if the sisters refuse to allow this, then they will be hit with fines of up to $100 per employee, per day. Over the last two years, the case has worked its way up to the Supreme Court, where oral arguments will be heard on March 23, Wednesday of Holy Week.

Our archdiocese is blessed to have the Little Sisters in Denver, where they carry out their ministry of caring for the poor and lower income elderly, making them a part of their loving family and comforting them in their final days. Their charity has even included priests of the archdiocese.

Some have tried to argue that the sisters are no more than a social service agency, but to say that is to fundamentally misunderstand their ministry, which is animated by their love of Christ and for Christ in the elderly people entrusted to their care.

At the heart of the government’s case stands the assertion that the Little Sisters’ should not object to letting their health plan be used to distribute contraceptives and abortion-inducing drugs because they will not have to pay for the drugs. But the government and its lawyers don’t seem to understand that the sisters aren’t concerned about money; they’re concerned about their consciences.

As he stood before Pilate, Jesus stated, “For this I was born, and for this I have come into the world, to bear witness to the truth. Everyone who is of the truth hears my voice.” The Little Sisters believe that the Church that Christ created has faithfully passed on the truth for over two millennia, including the truth in the area of contraception and abortion-inducing drugs, which is first mentioned in the first-century Church document called “The Didache.”  Our faith holds that contraception is immoral because it intentionally separates the life-giving and unitive aspects of love from each other.

When Jesus said that he came to bear witness to the truth, Pilate replied, ‘What is truth?’ (John 18:37-38). The government seems to believe that it knows the truth about our faith and argues that the Little Sisters shouldn’t have any moral objections. In essence they are imposing their morality on those who disagree with them. The Little Sisters are objecting to cooperating with evil and are ready to shut down their ministry, rather than comply with the government’s mandate.

I am proud of the Little Sisters of the Poor. They have demonstrated courage in the face of threats, they have tenaciously proclaimed the truth and have refused to cower in fear or complacency, and they deserve our support.

While the sisters are in court on March 23, the group Women Speak for Themselves will be organizing a day of service at the Little Sisters’ homes around the country, including at Mullen Home in Denver. Hundreds of people will also be rallying in front of the Supreme Court building in D.C. If you are able to stand in solidarity with the Little Sisters at either of these events, I urge you to do so. I encourage you especially to participate in the day of services at Mullen Home. Visit http://womenspeakforthemselves.com for more information.

May we all be inspired to live our faith with the fortitude, boldness and love Christ showed us upon the cross, and which he has given to the Little Sisters and so many other Catholic and Christian ministries that refuse to violate their consciences. In our relativistic age, may we encounter the truth, who is a person, Jesus Christ, and may we live according to the truth and embrace it fully!

May our Risen Lord bless the Little Sisters of the Poor and your families!