The life of Catholics in Pakistan 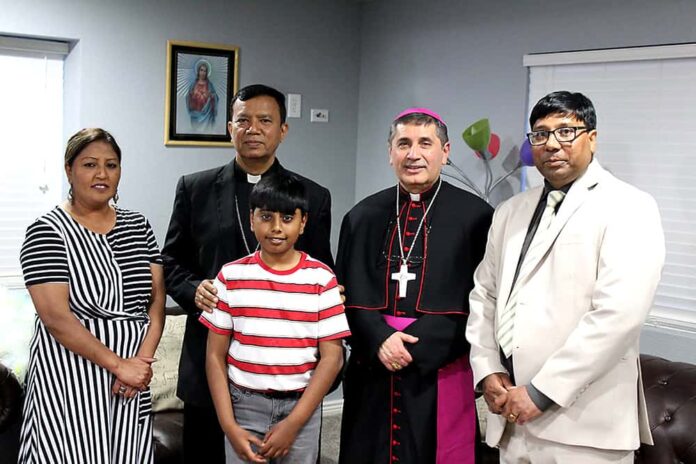 “It is a vibrant church,” Archbishop of Lahore, Sebastian Francis Shaw, OFM, who recently made a visit to Denver told the Denver Catholic, describing the Catholic community in Pakistan.

Lahore is the second biggest city in Pakistan, with a population of 11 million. It is also the largest diocese in the country, with 570,000 Catholics. In 2016, the city was the setting for one of the worst Jihadist attacks: a suicide bombing on Easter Sunday at Gulsan Iqab Park, leaving 78 dead and more than 300 injured.

In this country, which has a population of more than 190 million people, 96 percent of the people are Muslim, and less than one percent are Catholic. Catholics usually belong to the lower class, have fewer opportunities to be successful and are targets of persecution and threats.

Denver has a small Pakistani Catholic community, which received Archbishop Shaw with joy. He was able to celebrate a Mass with them in Urdu, the country’s official language, at St. Therese Parish in Aurora May 7, and even prayed a bilingual Rosary with them, accompanied by the Auxiliary Bishop of Denver Jorge Rodriguez.

“There are nearly two million Christians in the whole country,” Archbishop Shaw said. “For many centuries, Christians, Hindus, Muslims and Sikhs have lived together.”

Nonetheless, after Sept. 11, 2001, “many difficulties came,” due to the fact that “Pakistani Christians are considered allies of the U.S. government.”

The archbishop highlighted the case of Asia Bibi, the Christian citizen who was sentenced to death on charges of blasphemy in 2009, for drinking out of a Muslim family’s water fountain, and supposedly blaspheming against Mohammed. She was vindicated but had to flee to Canada.

“Asia Bibi is only one of those cases, but there’s many more,” the prelate assured.

Archbishop Shaw talked about the story of Akash Bashir, a 20-year old young man who died in 2015 trying to stop a suicide bombing attack at St. John Parish in the Youhannabad Districts in Lahore.

“The young man took hold of this man and didn’t let go. The attacker pressed the button and [20] people died. He gave his life to prevent the attack and saved many who were in that church, which were around 1,200 or 1,300 people,” he said.

What is most characteristic about Pakistani Christians is that “they love one another” and “they pray for their enemies,” something that surprises Pakistanis who practice other religions, according to Archbishop Shaw.

Young people make up 65 percent of the Christian population. There are also many young married couples with four or five children. “It’s always beautiful for the Church to have children,” the prelate said.

The Archdiocese of Lahore has 29 parishes, some of which have missions in more distant regions. There are currently 32 diocesan seminarians and 27 religious communities in the archdiocese. Due to the shortage of priests, there are many lay people who are catechists and are very dedicated to the faith.

Pakistani Catholics are a vibrant minority, and even though they are seen as second-class citizens, they have a strong faith, and many are even willing to give up their life for it. Above all, they are full of love for their neighbors.