Many Catholics would be skeptical to walk into a Mass that seems straight out of the Middle Ages, a Mass they could barely understand. The stigmas surrounding the “Latin Mass” have led numerous Catholics to question it: If the Church changed it, why go back to the “old ways”? Can I even get anything out of it? Wasn’t it invalidated?

But the Tridentine Mass or the Rite of St. Gregory the Great (names for the “traditional Latin Mass”) isn’t bad at all. In fact, many Catholics have “re-fallen” in love with it – not to mention the many saints it has sustained throughout history. It helps the faithful dive into a journey of the Mystery of the Mass through the silence, richness and beauty it radiates – and the fact that it’s in Latin actually helps.

“It takes most people about five or six times – with someone to show you the ropes – [to be able to follow it]. Then when you can follow it, and it starts to click, you might just fall in love with it, as I did, as do many,” said Father James W. Jackson, pastor at Our Lady of Mount Carmel Parish in Littleton and member of the Priestly Society of Saint Peter. “Even after that, there will remain depth of symbolism you won’t catch.”

Beauty and mystery are two components of this ancient liturgy that attract the many who experience its silence, music and language, Father Jackson said.

“The beauty and mystery of ecclesial Latin is not an obstacle, but a draw for many,” he said, echoing the words of the German theologian Father Matthias Scheeben, who said that for the heart that thirsts for knowledge of truth, the sublime, extraordinary and incomprehensible exercise a special attraction because “a truth that is easily discovered… [cannot] enchant.”

In a similar way, the preferred use of Gregorian chant, Latin and much silence in this liturgy opens the Christian to the mystery taking place.

Tridentine Mass is just another term for the Roman Rite that appeared on the Roman Missal from 1570 to 1962. It gets its name from the Council of Trent, which sought to restore the ancient rite practiced in Rome and make it mandatory in the Latin Church. Scholars say this rite, promulgated by Pope Pius V, can be traced back at least to the fourth century, for even Pope St. Gregory the Great (590-604) sought to remove contemporary traditions from it. For this reason, many prefer to associate his name with the rite instead of the council’s. The ancient liturgy is believed to have originated with the Apostle Peter, although it has experienced accretions throughout the ages. 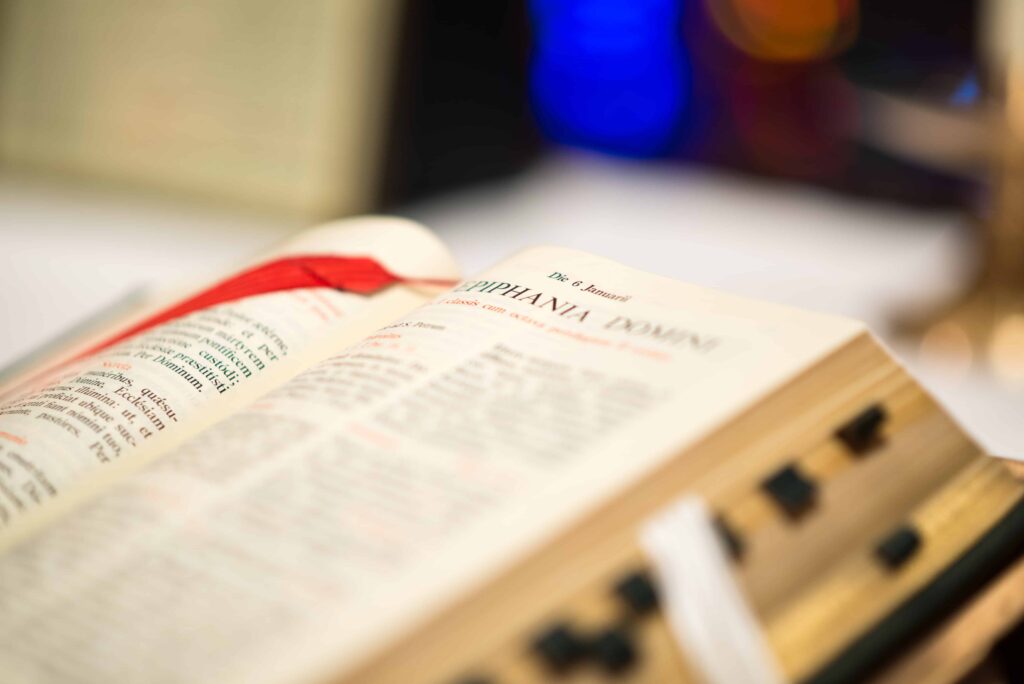 “The beauty and mystery of ecclesial Latin is not an obstacle, but a draw for many.” (Photo by Brandon Young)

After the Second Vatican Council, the Novus Ordo Mass promulgated by Paul VI in 1969 succeeded the Tridentine Mass and is now the Mass that most Catholics are familiar with. One of its greatest changes is a wider use of the vernacular language.

The post-Vatican II change of the liturgy brought about many questions that numerous Catholics still wonder today: What happened to the “old rite”? Is it still valid? Why go back to it?

In 2007, Pope Benedict XVI made it clear that the “new rite” from 1969 did not null the “old rite,” which was last published in 1962. Neither were they two different rites or versions. Instead, they must be seen as a “twofold use” of the same rite.

Thus, he called the “new” rite the “Ordinary Form” and the “old” rite (the 1962 Tridentine Mass) the “Extraordinary Form” of the Roman Rite. He also gave permission to all Latin Rite Catholic priests to celebrate the Extraordinary Form without people and with people “who, of their own will, asked to be admitted.”

People are now rediscovering the richness of the ancient Roman Rite that is, at times, easy to miss in the Ordinary form most Catholics attend in the present day.

“If one wanted to experience the older liturgy, it would have been quite difficult when I first started to say it in 1992,” Father Jackson said. “There were around 20 places in North America where one could attend the older use and be in full union with the local diocese and the Holy See.

“There are now around 475 churches which use it, increasing at a rate of about three new parishes per month. That growth is not phenomenal, but it is significant.”

Deep into the mystery

Some of the biggest visible ways the Extraordinary form differs from the Ordinary form in our time include the wider use of Latin (except for the homily and readings which sometimes are read in both languages), the use of Gregorian chant and polyphony instead of hymnals, the priest and congregation mostly facing the same direction (ad orientem, or to the east, toward the altar), much more silence, communion reception kneeling and on the tongue and more. 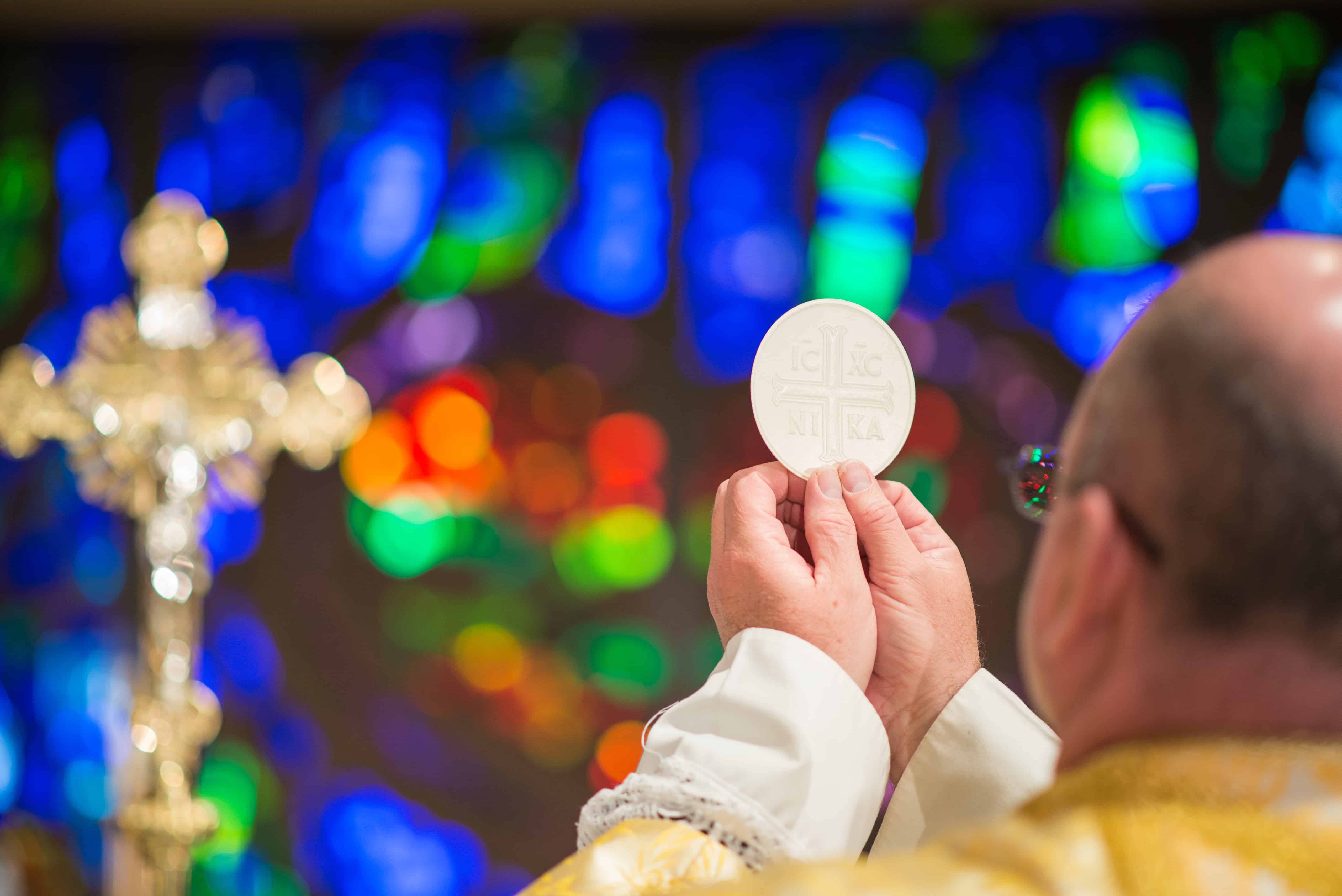 None of these aspects should be taken for granted, for they carry deep meaning – the whole liturgy does. Even what may seem like the smallest details say something, and the silence helps the faithful to enter into the mystery more deeply.

One example is the seven times the priest says “Dominus vobiscum” (“The Lord be with you”) during the Mass.

Another example is the five times the priest turns to face the people, he continued, “because Christ appeared five times to the faithful after his resurrection.”

Father Jackson highlights the symbolism of this rite extensively in his book Nothing Superfluous: An Explanation of the Symbolism of the Rite of St. Gregory the Great.

Attending and being familiar with the Mass that so many saints knew by heart, may just help us understand what Pope Benedict XVI saw clearly: “What earlier generations held as sacred, remains sacred and great for us too, and it cannot be all of a sudden entirely forbidden or even considered harmful.”

COMING UP: A man for strengthening others

When the choirs of angels led Father Paul Mankowski, SJ, into the Father’s House on September 3, I hope the seraphic choirmaster chose music appropriate to the occasion.  Had I been asked, I would have suggested the Latin antiphon Ecce sacerdos magnus as arranged by Anton Bruckner. The all-stops-pulled moments in Bruckner’s composition, deploying organ, brass, and full choir, would have been a perfect match for Paul Mankowski’s rock-solid Catholic faith, his heroic ministry, and his robust literary and oratorical style; the a capella sections, softly sung, mirror the gentleness with which he healed souls. Above all, I would have suggested Bruckner’s motet because Father Mankowski truly was what the antiphon celebrates: “a great priest who in his days pleased  God.”

We were friends for some 30 years and I can say without reservation that I have never met anyone like Paul Mankowski. He was off-the-charts brilliant, an extraordinary linguist and scholar; but he wore his learning lightly and was a tremendous wit. He rarely expressed doubts about anything; but he displayed a great sensitivity to the doubts and confusions of those who had the humility to confess that they were at sea. He could be as fierce as Jeremiah in denouncing injustice and dishonesty; but the compassion he displayed to spiritually wounded fellow-priests and laity, who sought healing through the work of grace at his hands, was just as notable a feature of his personality.

His curriculum vitae was singular. The son of working-class parents, he put himself through the University of Chicago working summers in a steel mill. He did advanced degrees at Oxford and Harvard, becoming the sparring partner of a future Australian prime minister, Tony Abbott, at the former, and delving deeply into the mysteries of Semitic philology – unfathomable, to most of his friends – at the latter. He taught at the Pontifical Biblical Institute in Rome and was pastor of an English-speaking parish in Amman, Jordan. Wherever he was, he lived like a true ascetic; he was also the best company imaginable at a meal or a party.

He was a writer of genius, although his published bibliography is considerably slimmer than it might have been, thanks to the years when he was silenced or censored by his religious superiors. A good example of his ability to combine keen insight and droll humor is his 1992 dissection of the goings-on at the annual convention of the American Academy of Religion (available here). More recently, Father Mankowski drew on his extensive experience as a confessor and spiritual director to pen, with his superiors’ permission, a respectful but sharp critique of his fellow Jesuit James Martin’s book, Building a Bridge (available here). In the decades between those two pieces, and when permitted to do so, he published essays and reviews on a wide range of topics, including literature, politics, Church affairs, biblical translations and the priesthood, while sharing his private musings with friends in a seemingly endless series of pungent parodies, revised song lyrics, and imagined news stories.

Years ago, his friend Father Richard John Neuhaus dubbed Father Mankowski one of the “Papal Bulls:” Jesuits of a certain generation notable for their intellectually sophisticated and unwavering Catholic orthodoxy, which often got them into hot water of various temperatures (including boiling) with their Ignatian brothers and superiors. Paul Mankowski was no bull, papal or otherwise, in a china shop, though. He relished debate and was courteous in it; what he found off-putting was the unwillingness of Catholic progressives to fight their corner with a frank delineation of their position. This struck him as a form of hypocrisy. And while Father Mankowski, the good shepherd, often brought strays back to the Lord’s flock, he was unsparingly candid about what he perceived as intellectual dishonesty, or what he recently deplored as “ignoble timidity” in facing clerical corruption. Paul Mankowski was not a man of the subjunctive, and he paid the price for it.

He is beyond all that now, and I like to imagine St. Ignatius of Loyola welcoming him to the Father’s House with a hearty “Well done, my son.” In this valley of tears, freshly moistened by those who mourn his untimely death at age 66, Father Paul V. Mankowski, SJ, will be remembered by those of us who loved him as a man and a priest who, remaining faithful to his Jesuit and sacerdotal vocations, became a tower of strength for others. This was a man of God. This was a man, whose courageous manliness reflected his godliness.