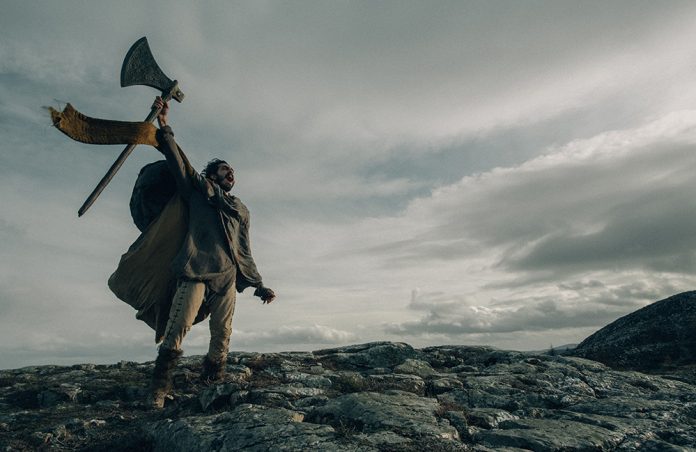 Rarely do I find myself looking to modern Hollywood for morality tales, either on screen or in headlines. And yet, every once in a while, a film is released that draws on truths incorruptible by CGI and modern mores. The latest film to do so is The Green Knight, in theaters this summer after years of production delays. It’s no coincidence that the film contains questions about virtue that we might consider to be old-fashioned, considering it is based on an Arthurian legend of the same name, written in the 14th century. In spite of production delays, the timing of the film’s release just happens to coincide with the release of a new edition of J.R.R. Tolkien’s translation and commentary on the original poem, Sir Gawain and the Green Knight (Mariner Books, 2021, edited by his son Christopher Tolkien).

Even though we know Tolkien best as a mythmaker in his own right, he also sought to transmit the great stories of the past. In gaining inspiration, he delved deeply into the lore of the Anglo-Saxons, finding rings and dragons in the story of Beowulf (which he also translated), and discovered the romance of “middle-earth” in the medieval ideals of courtesy and honor. In Gawain, Tolkien found a fundamentally moral story, for “there is indeed no better medium for moral teaching,” he contends in his commentary, “than a good fairy-story” (110). The poem focuses on temptation — a moral test that arises unexpectedly in the middle of a seemingly greater life and death challenge.

Gawain, the nephew of King Arthur, accepts the challenge of a mysterious Green Knight, who, in typical Round Table fashion, abruptly appears in the middle of the New Year feast. The young Gawain can give a blow to the ominous visitor, using the knight’s own axe, only if he agrees to receive one in return the following New Year’s Day. Although you would expect military prowess to dominate the story, the real conflict actually occurs within. Another challenge emerges as Gawain goes in search of the Green Knight he had beheaded (and who miraculously survived). He comes upon a castle, where a simple Christmas game turns into an onslaught on his purity and honor. Although Gawain comes through mostly unscathed, avoiding serious sin, he falls victim to a smaller weakness by breaking the rules of the game by receiving a present, a lady’s girdle, in an attempt to save his own life.

While the film adaptation differs in some respects from the original poem, the tests of morality and core lessons remain intact. What is perhaps most striking about the film is the concept of honor and the motivations of Gawain in both partaking in the Green Knight’s Christmastide game and his willingness to finish it. Early in the film, when Gawain sits next to King Arthur just before the Green Knight arrives, his uncle asks him to recount a tale from his life, of which Gawain has none to share. “I fear I’m not meant for greatness,” Gawain tells Arthur solemnly. Just then, the Green Knight enters, giving Gawain his chance to achieve the greatness he so longs for. He takes up the challenge, reckless as it is.

Later in the film, after Gawain makes it through the trials of the castle while hiding the girdle he received from the lord’s wife, he at last reaches the Green Knight, who attempts to hold up his end of the bargain. Gawain flinches as the Green Knight brings his axe down toward his neck; he whimpers that he must muster up the courage in order to accept the very same blow he so readily delivered to the Green Knight, and which the Green Knight so readily accepted. “You have had a year to find courage,” the Green Knight replies. The girdle represents that which is holding Gawain back from achieving the honor he seeks. He is told through the course of the film that it is a token of protection, and only by letting it go is he able to finish the Green Knight’s game honorably.

Although the film takes some liberties and ends a bit differently than the original story, reading the poem first does help to enter into the narrative and recognize the story’s moral themes. Be prepared — it is not an action movie but an artistic portrayal of a tortuous moral quest. Although thought provoking, it is also not an explicitly Christian movie (though there is some well-placed religious imagery), and viewers should be warned of some graphic scenes and sexual content (the film is rated R). Nonetheless, the film retains the same questions that captured the mind of Tolkien: Did Sir Gawain achieve the honor he sought? Is it worth losing our lives for the sake of honor and virtue?

All of us have to face a test — the trial of life made up of seemingly small choices. It’s a timeless truth that stretches back to Eve’s temptation in the Garden. We cannot enter the final celebration unless we hold fast to the gift and refuse to surrender it for anything else. The happy coincidence of Tolkien’s presentation of the Green Knight with his Hollywood appearance invites us to take stock of how we’re doing in the game — that great romantic quest of our lives.

Acknowledgement: For their contributions in helping me review the film, I’d like to thank Aaron Lambert and Kevin Greaney.

Featured image courtesy of A24 Films