The Good Samaritan shows us how to overcome division 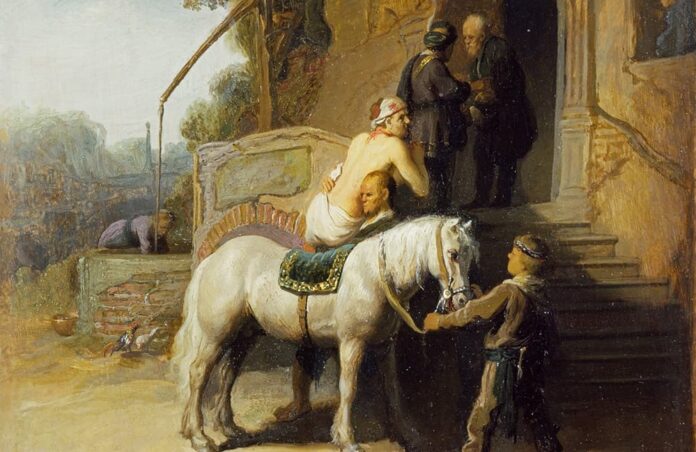 Most of us are familiar with the parable of the Good Samaritan, which hinges on Jesus’ question: who was neighbor to the man who was beaten by robbers and left to die? The scholar of the law whom Jesus is talking to responds that it was the Good Samaritan who “treated him with mercy.” This parable provides us with the key for growing in unity and overcoming division, which our society desperately needs today.

Our civil discourse has become so coarse that we are witnessing verbal and sometimes physical beatings in the public square. When Democrat Sen. Diane Feinstein is upbraided on social media for being too kind and civil to Republican Sen. Lindsey Graham, one recognizes how far off course our society has drifted. Gone are the days when disagreements focused on the substance of the issue debated.

Instead, people on opposite sides of arguments attack the character of those they disagree with and rush to judgement about their motives for not believing as they do. They think people should be dismissed and scorned, and civility and charity are only for those who agree with you. This is the modern equivalent of the Levite and the priest who walk on the other side of the road from the beaten man, closing their hearts to his plight.

In Fratelli Tutti, Pope Francis’ recent encyclical on fraternity and social friendship, he explains how in earlier Jewish traditions the “ancient commandment to ‘love your neighbor as yourself’ was usually understood as referring to one’s fellow citizens, yet the boundaries gradually expanded … (FT, 59).” In the New Testament, Jesus broadens this commandment to make it “universal in scope, embracing everyone on the basis of our shared humanity, since the heavenly Father ‘makes his sun rise on the evil and on the good (Mt. 5:45).”

It seems to me that amid the flood of information and misinformation about politics, our country, or even about the Church, we have lost the impulse for charity and recognizing the inherent dignity of every human being. We have gotten swept away in accusations and forgotten that each of us is a brother or sister because we have been created by God in his image and likeness.

If we love God, then we should be seeking to love him in each other, despite how badly that person behaves or how cruelly they speak to us. St. Mother Teresa often spoke about loving Jesus in the “distressing disguise of the poor” when she talked about caring for the abandoned sick and dying people in the streets of Calcutta. But the “distressing disguise” that we encounter in our streets and in our society today is different. These people may not be dressed in rags, rather, they are starving for love.

The Holy Father reflects on the Parable of the Good Samaritan this way: “It speaks to us of an essential and often forgotten aspect of our common humanity: we were created for a fulfilment that can only be found in love. We cannot be indifferent to suffering; we cannot allow anyone to go through life as an outcast. Instead, we should feel indignant, challenged to emerge from our comfortable isolation and to be changed by our contact with human suffering (FT, 68).”

This ability to be moved with compassion, which comes from receiving God’s love for us and then loving others as he loves us, stands at the heart of God’s desire for unity. And therefore, it must be at the center of any effort to promote unity.

We see this central role of charity in building unity in St. John’s Gospel when Jesus is anticipating his Passion, Death and Resurrection and prays for the unity of all those who have and will believe in him. ‘Righteous Father,’ he says, ‘the world also does not know you, but I know you, and they know that you sent me.  I made known to them your name and I will make it known, that the love with which you loved me may be in them and I in them (Jn. 17:25-26).’ Here we see again that it is the love of God, which gives birth to charity in us, that produces unity.

May each of us experience the love of the Father, Jesus and the Holy Spirit for us. May we live well the virtue of charity and allow ourselves to be moved with compassion for those who disagree with us and are perceived to be our enemies, especially as we approach the upcoming election cycle.