The Fire of Faith: Living in Christian freedom and becoming Saints 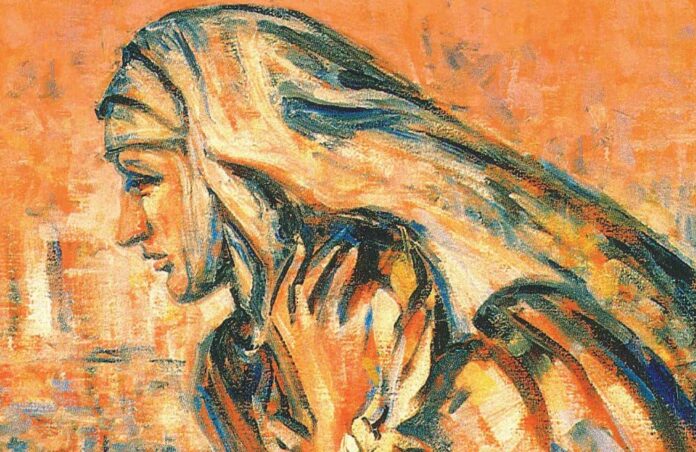 God’s grace flows through us like a river, washing us and nourishing his divine life in us. His grace flows freely when we let go of the attachments that dam us up, blocking grace’s entry points. If we are distracted by technology and do not make time to pray, are stuck in impurity, or consumed by work, we will miss what’s most important. Those dams not only block the grace from working within us, but they also block it from flowing out to others and becoming a source of light and strength to them.

I used the common image of water, while the great mystic, St. Catherine of Siena (1347-80), preferred the images of fire and blood. Catherine lived in a tumultuous time, to say the least — the time of the Black Death, the Hundred Years War, and the Avignon Papacy that led to the Great Western Schism. She was an unlikely candidate for God to use as his agent for change in the Church and society: a young woman, still living at home and having spent years in secluded prayer.  Father Paul Murray, O.P., lays out the power of Catherine’s response to God, which opened her to true freedom, in his book, Saint Catherine of Siena: Mystic of Fire, Preacher of Freedom (Word on Fire, 2020).

The call of St. Catherine shows us life’s first priority, creating a genuine freedom in the soul so it can receive the gifts of God. God becomes present to the soul as a refining fire, consuming what does not belong and enflaming real holiness and freedom. Catherine, writing to Stefano Maconi, shows that God wants us to become our true selves in him: “If you would be the person you are meant to be, you could set fire to the whole of Italy” (161). This is precisely what happened to Catherine. She experienced the fire of God in her soul and sparked it in others — criminals, merchants, mothers, monks, bishops, and even the pope.

Becoming a saint is not easy in any age, but in ours it has become increasingly difficult due to the rise of an anti-Christian culture throughout the world. The 20th century witnessed enormous oppression from Communism, with over 100 million victims; however, even in the midst of it, great lights emerged. When St. John Paul II returned to Warsaw after his election, he urged his countryman to live in the truth and to reject the lies of the Communist state, trying to pit family members, neighbors, and co-workers against one another. Rod Dreher has looked at the noble response of Christians under Communist regimes as a model for how to respond to a new kind of oppression that uses the media, consumerism, and identity politics to control the way people think and live in the West. It is a new and subtle form of control, a “soft totalitarianism,” as Dreher explains in Live Not by Lies: A Manual for Christian Dissidents (Sentinel, 2020), by positioning itself at the service of oppressed groups and personal satisfaction.

Dreher explains, “This totalitarianism is therapeutic. It masks hatred of dissenters from its utopian ideology in the guise of helping and healing” (7). It is akin to older forms of oppression in that it “seeks to displace all prior traditions and institutions, with the goal of bringing all aspects of society under control,” aspiring “to nothing less than defining and controlling reality” (7-8). Passive acceptance of a new way of thinking has happened through the distraction of technology and the ever-increasing desires fostered by consumerism. Individualism has led to loss of shared purpose and weakening of community that in turn has exposed Americans to the subtle manipulation of technology and social media (33, 76). “This technology and the culture that has emerged from it is reproducing the atomization and radical loneliness that totalitarian communist governments used to impose on their captive peoples to make them easier to control. … We are being conditioned to surrender privacy and political liberties for the sake of comfort, convenience, and artificially imposed social harmony” (92-93).

Thankfully, the second half of the book looks at strategies for “how to live in truth” (95). Dreher tells amazing stories of Christians in Eastern Europe, who despite attempts at brainwashing and social control, were able to “see, judge, act” in order to resist pervasive lies and evil.  First of all, despite any social pressure, even torture, one can never accept lies as the truth, because a Christian has to live in accordance with reality. Second, we have to preserve a vital memory of tradition: “To perceive the critical importance of memory and the role culture plays in preserving and transmitting it is critically important for Christianity’s survival” (126). Third, we have to protect the family, the true bedrock of society, against constant attack. Dreher rightly recognizes it as the key “resistance cell” that teaches children how to think and live in accord with the truth and to create real community. He also recognizes the vital importance of faith to keep us focused on the true good (151) and to help us to stand in genuine solidarity with others, forming communities of support (ch. 9). Finally, Dreher exhorts us to be willing to suffer for the truth, the ultimate witness to a freedom that transcends raw power and the therapeutic.

What is holding you back from being a saint? We face so many obstacles, both within and without. When we open ourselves to God’s grace, he makes crooked ways straight in us, turning us into conduits of his grace for our culture. The saints provide witness to the reality of God’s grace — that it is possible to be holy. St. Catherine witnesses to the true freedom that comes from the blood and the fire of God’s presence. Rod Dreher exhorts us to live within that presence, and the truth that it brings, no matter the obstacle. If we cling to God above all else, his divine life will flow through us, not only cleansing us but bringing God’s fire to the world.