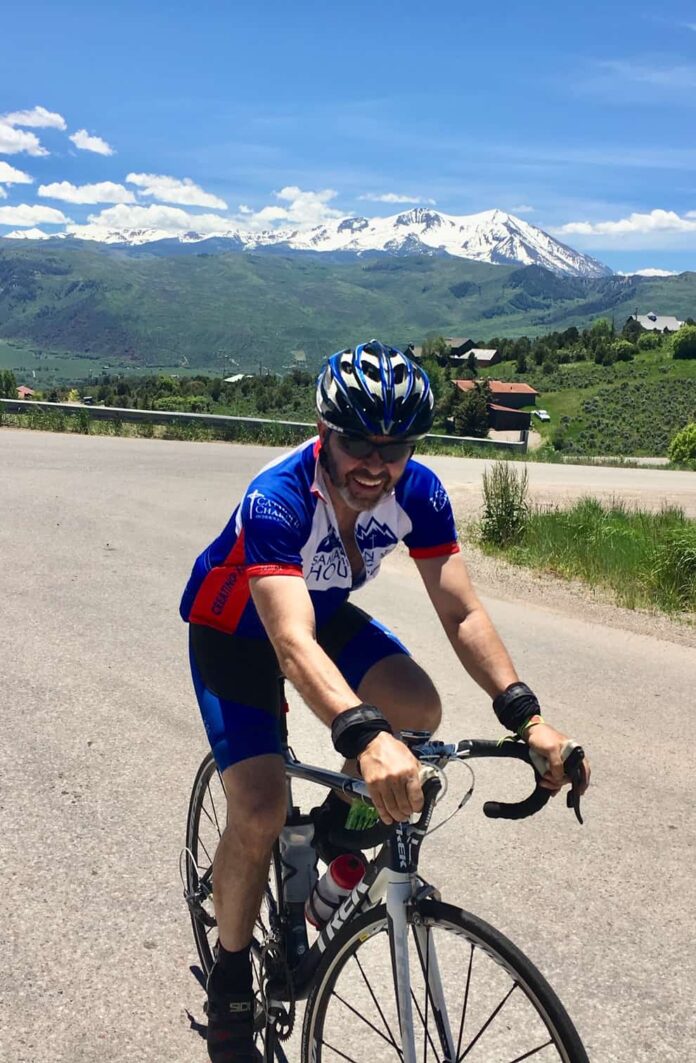 Last June, Luis Bernardez finished his second Ride the Rockies with Team Samaritan House. Having just recently retired from his job working as a physicist in California, he was ready to enjoy a new chapter of life in Bozeman, Mont., with his wife, Kellie. Luis assumed he would eventually return to the annual Colorado cycling tour but thought that aspiration could wait for someday farther down the road. Then in December, he received news that altered every plan: He was diagnosed with glioblastoma — brain cancer.

Luis knew he had no more time to waste waiting for someday.

“When you have time to live and do stuff, you tend to put things off a bit. And so this year, I decided I would try to do it again,” said Luis, 57, during a phone interview with Denver Catholic.

Following a near-immediate surgical procedure to remove the tumor in December, Luis underwent 42 days of chemo and nearly seven weeks of radiation. The intensity of the treatment made it hard to imagine undertaking a weeklong, 432-mile cycling ride through the Rocky Mountains.

“At first, he didn’t want to do anything, and then he started thinking about things,” said Kellie, Luis’ wife of 21 years. “It’s a different ride for him. In the past he’s been able to work out and get in shape for it, but this time it’s just to experience the whole thing.”

Ride the Rockies started in 1986, a creation of The Denver Post. The annual tour follows a different route each year in June, and typically involves cycling over 400 miles in total distance over six or seven days.

Team Samaritan House has fielded a team in the ride for nine consecutive years to raise money to support families and individuals experiencing homelessness. Started by team captain Tom Schwein and co-captain Tom Dea, it began with only six riders in 2010 and has grown steadily, with 50-60 riders participating in Ride the Rockies this year, according to Dea. Each rider on the team is asked to raise a minimum of $1,500, with all funds going to Catholic Charities’ Shelter Services in four locations in northern Colorado, including the counties of Denver, Larimer, and Weld, as well as a location on the Western Slope. Fundraising continues through October, and Team Samaritan House has a goal of $250,000 for this season.

For co-captain Dea, it is a blessing to meet and include the many different people that God brings together to support the team.

“Luis got involved the second year in 2011. He was a college friend and he was in my wedding, and I was in his. Luis is an exceptional athlete and he was excited to join the team. I invited him  and am thankful he accepted,” Dea told the Denver Catholic in an email sent from this year’s Ride the Rockies route. The race ran June 9-15.

When Kellie told Dea about Luis’ glioblastoma diagnosis, Dea was shocked, but still wanted to welcome his longtime friend to return to the ride for a third time.

“Not knowing whether he was willing to accept the challenge was hard, but once he agreed, I was stoked for the opportunity to spend a week with my college buddy,” said Dea.

The encouragement from Dea and the other Team Samaritan House riders, as well as from those who have donated to Catholic Charities in support of Luis’ ride, has been felt by both Luis and Kellie.

“Everyone so far has been very happy that he’s able to ride at all, and they’re very happy they’ve supported this whole organization in general, the whole Team Samaritan House and all of Catholic Charities. It’s been wonderful for all of them,” said Kellie.

Though not a practicing Catholic himself, Luis acknowledges a tangible sense of faith in the prayers offered for him by Dea and his teammates, and in all that surrounds him.

“[Faith] is more contemplative now,” said Luis. “Of course, God is all in on this, as far as things go. It does seem like God is there every day. I just seem to look around and He seems to be ever-present.”

Moving forward, Luis will continue chemotherapy treatments for as long as possible and won’t put off appreciating the time he does have.

“Because of the cancer, it makes you feel like you need to do the things that you want to do,” said Luis. “It’s kind of like the bucket list. You gotta get rid of those things.”

Anya Semenoff
Anya is a freelance writer and photographer in the Denver area.
RELATED ARTICLES
Local