A new declaration by the nation’s largest teachers’ union is causing some in Catholic education to raise their eyebrows in alarm.

Earlier this month, the National Education Association (NEA) adopted a new “business item” declaring its support for “the fundamental right to abortion under Roe v. Wade.” With over three million members, the NEA is one of the largest labor unions of any kind within the U.S. and it is highly influential on policies within public education.

Business Item 56 states that the NEA will “include an assertion of our defense of a person’s right to control their own body, especially for women, youth and sexually marginalized people.” It then states that it “vigorously opposes all attacks on the right to choose” and expresses its concurrence with Roe v. Wade and a fundamental right to abortion.

The purpose of education

But what does this declaration actually have to do with education? Nothing at all, said Mary Pat Donoghue, Secretariat of Education for the United States of Conference of Catholic Bishops.

“This has nothing to do with education, and everything to do with advancing an agenda that is rooted in an ideology that has separated the person from the Creator,” Donoghue told the Denver Catholic. “It violates the naturally good ends of education: the formation of a child in knowledge, wisdom and virtue.”

With this declaration, the NEA’s motives are becoming clearer, Donoghue said.

“It signals, unequivocally, that the primary concern of the largest professional union of teachers is not the proper education of the children it serves, but rather the destruction of the most vulnerable children: those in the womb,” she said.  “In affirming Roe v. Wade, the NEA seems to be renouncing something that most educators take great inspiration from: the idea that children represent hope for the future.

“The teachers’ union as a whole is signaling that it does not support every child. Only those children who are ‘wanted’ – and free from anomaly or disability – will be entitled to an education.”

As society deals with a public educational system that many argue is broken, unions such as the NEA could be leaders of reform for education. However, Donoghue pointed out that it seems they don’t see this as a priority.
“The emphasis on abortion support – instead of, say, student learning or teacher formation – is not an avenue of improvement for America’s schools,” she said.

Actions like those of the NEA are cause for evaluating the true purpose of education and what its aim should be for society. Catholic education can be an effective means for counteracting an educational system that shows more favor toward partisanship and utilitarianism than human formation.

“The Church’s own intellectual tradition – which gave the world the university system and thus formal education – demonstrates to the culture that the integral formation of the human person is the first priority of education,” Donoghue explained. “We have seen that an approach to education that is devoid of virtue, and too narrowly focused on skills and job-market preparation, does not produce a citizenry capable of advancing a culture toward authentic freedom, charity and equal dignity.
“Catholic education, which embraces the integration of faith and reason, can restore this to society.”

A change in stance

This declaration marks a shift from what the NEA has publically expressed in the past. In a previous document titled “The Truth about the NEA: The NEA Response to its Critics,” they clearly stated that they do not have a pro-abortion policy, and that they have not “spent one penny under its legal services program defending [the] right to have an abortion.” But some critics say the NEA has always supported abortion behind the scenes, and are now just being more forthright about it.

“The NEA went from trying to have a stance that favored abortion but denying that’s what they were doing, to opening avowing that they’re favoring abortion,” said Andrew Seeley, Director of Advanced  Formation for the Institute of Catholic Liberal Education, in a phone conversation with the Denver Catholic. “The NEA joins with other cultural organizations in leading others to do this.”

This is cause for concern, Seeley said, because it presents various dangers for those who do not conform to this way of thinking, especially Catholics.

“It is a great danger in that it’s just going to seem more and more like all of society thinks abortion is a right, and it’s going to increase the incomprehension and at least a subconscious tolerance for people who are saying abortion is wrong,” he explained.

Of course, Seeley notes that it won’t do much good to aggressively impose a pro-life stance in opposition to the pro-choice advocates. As Catholics, we must have compassion for those who seek an abortion and educate students properly about the nature of life.

“We need to tell them the truth about abortion by going into the biology of conception and development and by looking at what abortion procedures really do,” Seeley said. “It’s really important that the young see that many women have abortions not because they’re radical or evil, but because they feel like there’s no other way out. They [need to] see how important it is to provide help and support for young women who are facing a difficult situation.

“Things are becoming clearer now. And that’s an opportunity for us to show that we really care and then speak the truth in love in opposition to a clear enemy of life.”

COMING UP: Catholic education is More Than You Realize

This year’s annual formation day for teachers looked a little different than years past. You might even say it was More Than You Realize.

All archdiocesan Catholic school employees gathered at the Doubletree Hotel in Stapleton March 8 for a day of training and catechesis hosted by the Archdiocese of Denver’s Office of Catholic Schools. A series of talks were given by several speakers who all showed that history, art, beauty, science, faith, reason, and ultimately Catholic schools are all More Than You Realize.

Superintendent Elias Moo began his address to the teachers by asking what the fundamental difference between Catholic and public schools is. He used two examples to illustrate his point: a science classroom examining red blood cells under a microscope and a math class learning about the Fibonacci numbers and the elusive Golden ratio.

“Through the use of their reason,” Moo continued, Catholic school students will “come to know and discover the mind of God and thus come to love him because in all things they see, they will see the imprint and mark of he who made it all for them.”

However, academic success cannot be the only thing that sets Catholic schools apart from other schools, Moo said. An education rooted in the principles of the Gospel demands more from its teachers and everybody else involved because such an education is not solely concerned with the academic.

“We don’t just want academic or career success for our students,” Moo said. “We want more for them because they deserve more.”

In essence, Moo said, Catholic schools need to support parents in raising their children in the faith and forming the whole person.

“This is why our Catholic schools in the Archdiocese of Denver exist,” Moo explained. “To support parents in forming their children as faithful and virtuous disciples of Jesus Christ who are fully alive and serve the common good. This is our charter and it doesn’t come from a model or educational fad or trend, but from the heart of the Church.” 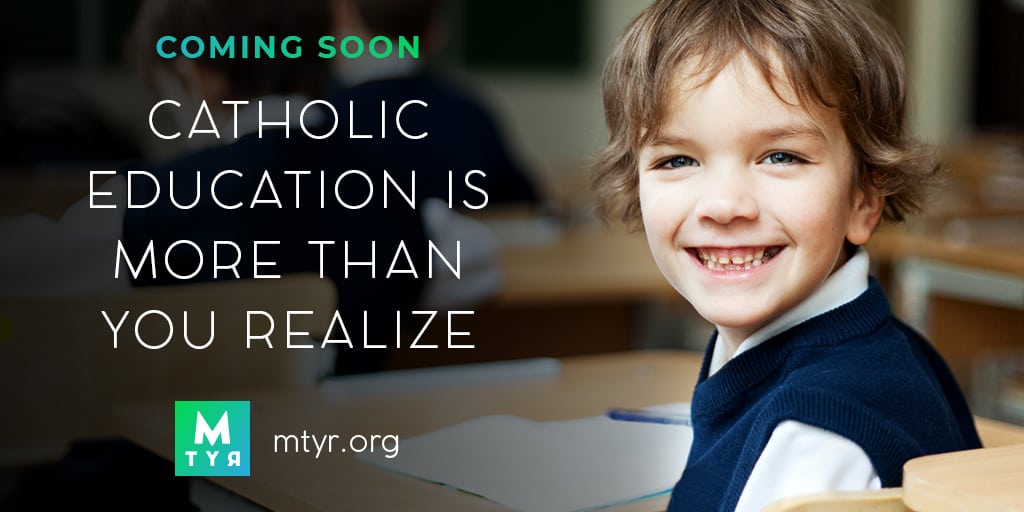 Frassati Catholic Academy sixth grader John Siurek was invited to speak at the conference about how teachers can inspire students to be the best they can be.

“We need teachers to push us to the heights that we can go,” Siurek said. “Let us do more than just learn! Inspire us with subjects that we have never learned before.”

He implored the teachers to be constant sources of inspiration and encouragement for students: “Help us to believe in ourselves and the things that we are capable of doing! Your words of encouragement make us feel like we can do anything, and they help us to strive to live up to what you believe about us.”

Most importantly, however, he told them to help their students to become saints.

“Help us to be like Jesus. Show us how to love him and serve him,” he said. “Pray with us, sing with us, correct us when we need it, and let us know when we are being good examples…all of our Catholic schools should help us kids to be saints!”

All those in attendance agreed, if their standing ovation was anything to go by.

“I love that we are here to build the kingdom of heaven,” said Linda Capaldo-Smith, Preschool Director and Pre-Kindergarten teacher at Christ the King Catholic School in Denver. She said that after the conference, she is even more excited to teach the little ones that God “is in every part of our lives. God is there and has made everything for us.”

Lauren Powell, a kindergarten teacher at Frassati Catholic Academy, said that the day served as a fervent reminder that her job as a Catholic school teacher is to help form the whole person of her students.

“It reenergizes me in terms of teaching their soul as well as their mind,” she said. “[I’m] wanting to go back and make sure my students know how much God loves them. I want to tell them that more, every day, and hope that they can see that they’re more than they realize.”