The McGrath Institute for Church Life at the University of Notre Dame, the Office of Catholic Schools and Holy Family High School invites school educators and administrators across the state to the first-ever Institute Day for teachers, a one-day workshop where attendees will have the opportunity to learn teaching methods to enhance dialogues between science and religion in Catholic education.

The Institute Day will take place Feb. 13 at Holy Family High School and will incorporate a range of topics including creation and evolution, modern science, formation, science and the bible as well as other subjects and disciplines.

Institute Day is a great opportunity for teachers and administrators to gain value and better understand how to unite faith and science in their approach to catechesis about Creation and evolution. Religion educators will explore how science informs and enhances their appreciation of God’s creation and action, while science teachers will learn how to engage the Catholic vision of creation and the human person while upholding the integrity and value of independent scientific investigation.

“The goal is to show that because God is the author of everything, he is the source of all creation to show that his fingerprints are in everything we encounter in the world,” said Brittany Storgaard, Theology teacher at Holy Family High School. “Not just the Bible, but our biology, mathematics, the way the universe works, the way the solar system is aligned, literature, beauty, art… all of it. And so, the goal of the McGrath Institute is just to provide content education for teachers to be able to present those realities to their students.”

Attendees will have the opportunity to listen to inspiring talks from well-known scientists, theologians and professionals that will innovate teaching strategies and share their stories. Among these speakers are Stephen M. Barr, Ph.D. Professor Emeritus of Physics, University of Delaware, Christopher T. Baglow, Ph.D. Director, Science & Religion Initiative, McGrath Institute for Church Life, University of Notre Dame, and Christian Bobak, current and all-time winningest head men’s soccer coach at Franciscan University of Steubenville.

“We would love to have anyone and everyone who cares about the mind, body and soul of our students to help them delve into the intimate and incredible relationship between God, our creator and all of the things that he has created in whatever field of study that might be,” added Storgaard. “And that’s really the heart of this institute day, and one of the common goals of Catholic education: is to show our students how to encounter God through everything they encounter in their lives, especially through their education, as they pursue knowledge of him through knowledge of the created world.”

In addition, Holy Family High School, in conjunction with the McGrath Institute and CU Boulder Fiske Planetarium, will be providing a public showing of All Creation Gives Praise, a program that bridges science and religion in an unforgettable way, inviting the audience to give praise to the Creator in awe and gratitude. All Creation Gives Praise is presented by Dr. Leonard DeLorenzo and Dr. Phil Sakimoto. The presentation will be first shown to students during the school field trip to CU Boulder Fiske Planetarium on Feb. 28 and then a public viewing that evening.

Institute Day is free of charge for teachers who register by February 6, 2020. Teachers can register at: https://mcgrath.nd.edu/conferences/academic-pastoral/science-and-religion-institute-days/upcoming-events/institute-day-holy-family-high-school/
Late registration fee, February 7 or later, will be $25.

COMING UP: Science is an act of worship

Bill Nye the Science Guy and the recent Marches for Science would do well to learn a thing or two from Vatican observatory director Brother Guy Consolmagno, who argues that science is so much more than simply studying the natural world; it’s an act of worship.

Students at Regis Jesuit High School were treated to a special visit by the Jesuit brother April 20 for an all-school assembly in which he spoke of the crucial juncture of life the students are in. Following the assembly, he hosted two Q&A sessions for students interested in the convergence and compatibility between science and faith. An evening presentation open to the public was also held in which Brother Consolmagno addressed the question, “Does Science Need Faith?”

Speaking of his own path to becoming a world-renowned astronomer and a Jesuit, Brother Consolmagno encouraged the students to embrace this time of their lives and use it to find those things that bring them joy – and a bright future. 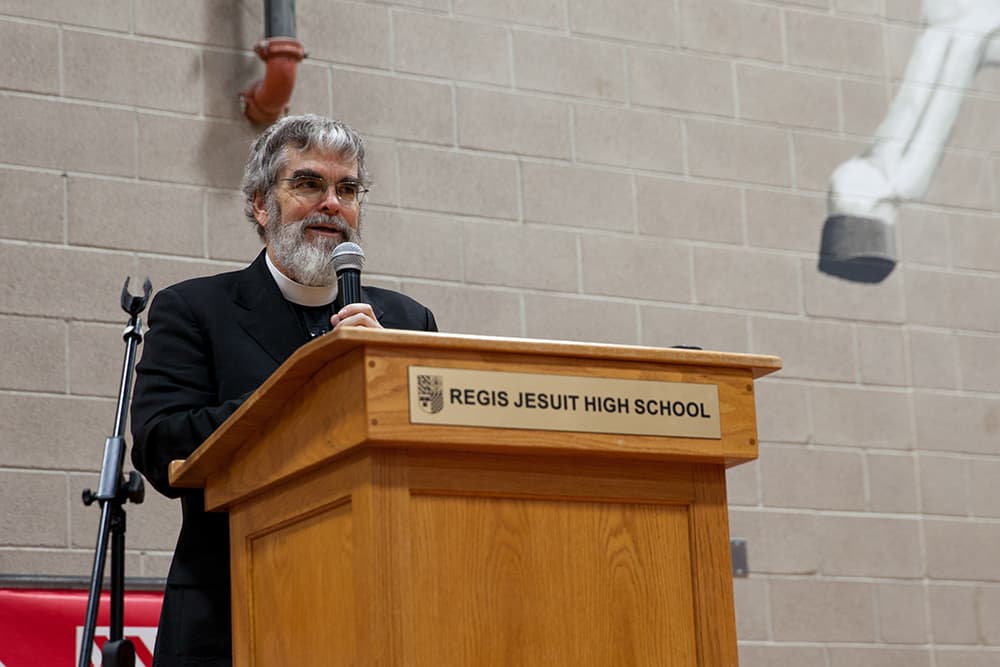 Brother Consolmagno found that joy when he decided he wanted to be a scientist. He majored in earth and planetary science at Massachusetts Institute of Technology and became fascinated with meteorites.

“You can hold outer space in your hands, and I was hooked,” he said.

His vocation as a Jesuit brother never conflicted with his profession as a scientist. In fact, he tends to look at science as an act of worship.

“Science needs faith, it needs joy, or it wouldn’t happen,” Brother Consolmagno told the audience at his evening presentation. He related his work as a scientist to playing a game with God, much like a parent plays with a child as an expression of love.

“Spending time, sharing the joy, the little bit of discovery we get in a simple game that a kid can play – that’s how I feel when I’m in the laboratory,” he said. “I’m playing a game with God. God has set up the puzzle, it’s up to me to solve it. And when I get a little progress, I can hear God saying, ‘Yeah, isn’t that cool? Now let me show you the next step.’ That’s why doing science is an act of worship.”

The debate between science and religion persists, even to this day, but the two don’t have to be at odds, Brother Consolmagno said. In fact, the Catholic Church has historically played an important role in advancing scientific studies. After all, it was in the medieval universities, which were started to train priests and clergy, where the study of science began.

“We owe our system, not only of educating people, but also of letting other people know that you’ve been educated, [to] the Church,” he explained.

People are often surprised to discover that the Vatican has an observatory, let alone a team of scientists doing important scientific work, Brother Consolmagno said. The attitude that religion and science are at odds can do more damage than good, he said.

Brother Consolmagno is far from the only religious with this attitude toward science. Father Tomasz Strzebonski, parochial vicar at St. Clare of Assisi Parish in Edwards, has a degree in theoretical physics – a product of his knack for breaking things and putting them back together as a child in Poland. He also grew up in a devoutly Catholic family, and faith was an important part of his life.

“I always had two worlds, but I never saw them as separate. I always saw them mingled together and I think that’s my perspective of how I see the relationship between faith and science,” Father Strzebonski said.

Science is propelled by questions, Father Strzebonski explained, and the main contention between faith and science lies in the other side’s unwillingness to ask questions.

In questioning things – whether they be scientific theories or matters of dogma in the Church – people come to a greater understanding of how things work.

In a way, Father Strzebonski explained, both faith and science are chasing after the same end: truth.

“Both are seeking the truth. Jesus is the way, the truth and the life. When we are deepening our faith, we are getting closer to the truth,” he said. “The scientist, [too], is looking for the truth [about the universe].”

When it comes to questions of faith and science, Father Strzebonski said there should be no fear in not knowing the answers, but also to acknowledge that there are still many questions to which answers should be pursued.

This story has been amended to correctly reference Brother Guy as a Jesuit brother.