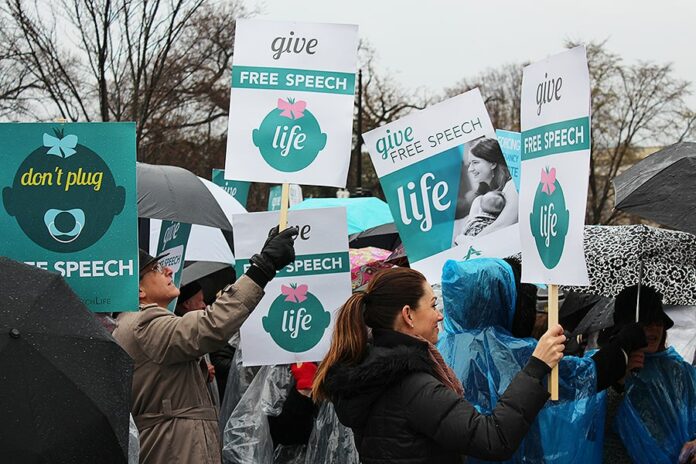 “No one should be forced by the government to express a message that violates their convictions,” said Michael Farris, president and CEO of Alliance Defending Freedom, which argued before the Supreme Court on behalf of NIFLA, a non-profit that provides legal counsel to pro-life pregnancy centers around the country.

“The government used its power to force pro-life pregnancy centers to provide free advertising for abortion. The Supreme Court said that the government can’t do that,” Farris said in a statement.

The June 26 ruling in National Institute of Family and Life Advocates (NIFLA) v. Becerra involved California’s “Reproductive FACT Act,” which requires pro-life pregnancy centers to display a notice informing patients about California programs that, among other things, can provide a free or low-cost abortion for eligible women, and phone numbers of places to obtain them.

The law also mandates that any non-medical pregnancy center, such as one that distributes free maternity clothing or baby items to a pregnant woman, must display a notice explaining that it is not licensed as a medical facility in the state of California. There is no current licensing scheme in the state of California for non-medical facilities who distribute baby supplies.

In a 5-4 ruling, the Supreme Court found that the “petitioners are likely to succeed on the merits of their claim that the FACT Act violates the First Amendment.” It sent the case back to a lower court to be reconsidered, with the understanding that the lower court was incorrect to treat the speech of pregnancy centers as a lesser category of free speech simply because it is “professional speech.”

Anne O’Connor, the vice president of NIFLA, said in a statement that Tuesday’s decision “is not just about whether or not to hand out abortion information on a piece of paper or post it on the walls of our pro-life centers.”

“It is about the right belonging to all American citizens to be free from government-compelled speech, and from being coerced into promoting a message that contradicts their values.”

Cardinal Timothy Dolan of New York, chairman of the U.S. bishops’ pro-life committee, also offered praise for the Supreme Court’s decision. The U.S. Conference of Catholic Bishops was one of several religious groups that had filed a brief in favor of NIFLA.

Dolan said the court had “affirmed that the First Amendment protects the right of all organizations to choose for themselves not only what to say, but what not to say.”

The decision is “an important development in protecting pro-life pregnancy centers from future efforts to compel speech in violation of their deeply held beliefs,” the cardinal said.

NARAL, a group that supports expanded abortion rights around the country, objected to the ruling, posting on Twitter that the Supreme Court had “just ruled that unlicensed fake women’s health centers are free to dress up as doctors & deliberately lie to women” about reproductive health.

“Pregnancy care centers in the United States offer collectively over $100 million in resources to women and men facing an unexpected pregnancy. And they operate out of the sheer goodness of their heart, to help these people in difficult scenarios,” she said.

“California has been forcing these centers to advertise for abortion, which goes against the very reason for these centers. We are delighted that the Supreme Court today protected free speech rights and protected the right of pregnancy care centers to be able to provide these wonderful resources.”

Americans United for Life, a group involved in crafting state-level pro-life legislation, said the ruling is a victory for “the thousands of women who go to the centers seeking life-affirming care and support.”

“AUL is encouraged by this ruling, and our legal team will continue to support the excellent work of pregnancy care centers,” the group said in a statement.

The article was originally written by Christine Rousselle at Catholic News Agency and is reprinted here with permission.