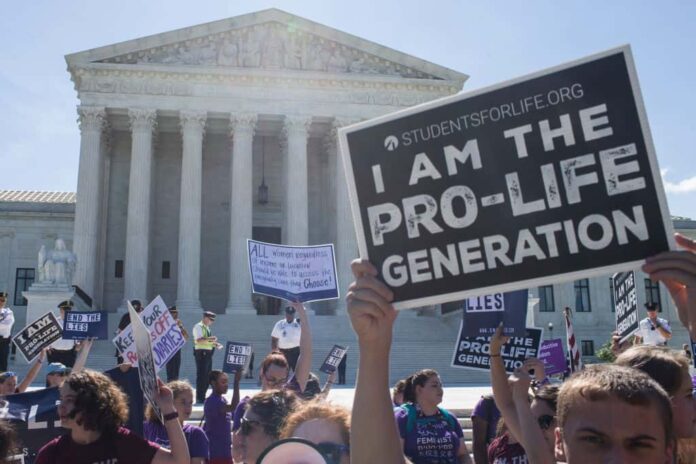 On June 26, the U.S. Supreme Court blocked enforcement of a California law that requires pro-life pregnancy centers to provide information to women about state-funded abortions.

Both sides said the decision on National Institutes of Family and Life Advocates (NIFLA) v. Becerra essentially strikes down the law.

NIFLA, a nonprofit organization that supports pro-life centers, had challenged the FACT Act saying it violated the centers’ First Amendment free speech rights. The state said the law was necessary to let women know their options.

“Licensed clinics must provide a government-drafted script about the availability of state-sponsored services, as well as contact information for how to obtain them. One of those services is abortion—the very practice that petitioners are devoted to opposing,” Thomas wrote.

“By requiring petitioners to inform women how they can obtain state-subsidized abortions—at the same time petitioners try to dissuade women from choosing that option—…plainly ‘alters the content’ of petitioners’ speech.

“California cannot co-opt the licensed facilities to deliver its message for it.”

The winners were elated.

“No one should be forced by the government to express a message that violates their convictions, especially on deeply divisive subjects such as abortion,” Michael Farris, a lawyer and leader of the Alliance Defending Freedom, who argued on behalf of NIFLA before the Supreme Court in March, said in a statement.

“In this case, the government used its power to force pro-life pregnancy centers to provide free advertising for abortion. The Supreme Court said that the government can’t do that, and that it must respect pro-life beliefs.”

“But our work to ensure that Californians receive accurate information about their health care options will continue,” he said in a statement.

“We applaud the Supreme Court’s decision to uphold our free speech right to provide the best possible medical care with compassion and respect—the kind that women deserve,” McIntosh told the Denver Catholic.

“This is a victory for women. Our medical clinics provide women in our community with life-affirming health care, and their response has been overwhelming.”

Since its inception two years ago, Marisol Health has provided care to more than 1,800 patients—70 percent of whom had incomes under $30,000, McIntosh said. Some 47 percent of clients also received counseling or social casework services.

The victory comes at a time when pro-abortion groups are using propaganda billboards and video to undermine the work of pro-life pregnancy centers.

In May, Marisol Health threatened legal action against ProgressNow Colorado, a liberal advocacy group, demanding that Marisol’s image and name be removed from a social media video by the group that mischaracterizes Marisol’s health care and implies it to be a “fake clinic.”

“When our work is misrepresented in the media we want to do what we can to correct those misperceptions,” McIntosh said. “That’s the best thing we can do for the women who can benefit from the unique model of service we provide with the medical care and the social and human services so closely integrated with one another.”

The Associated Press, The Washington Post and the Los Angeles Times contributed to this story.