His Church. Our Experience.
Subscribe
HomeOn MissionFocusStar Wars and the eternal struggle between light and darkness
On MissionFocusLocalPerspectiveOpinion

Star Wars and the eternal struggle between light and darkness 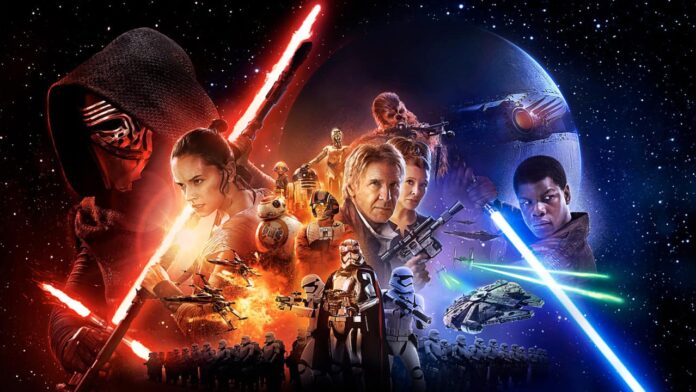 Unless you’ve been living in a galaxy far, far away, it’s nigh impossible to have not caught onto the newly reawakened Star Wars craze, and even then, it’s likely to have reached your corner of the universe. It’s been nearly 40 years since the first entry in the epic space drama was released, and as J.J. Abrams kicks off this new “sequel trilogy” with The Force Awakens, the Han Solo cosplayers and Ewok sympathizers aren’t likely to go away anytime soon.

I’ll admit it: I’m a huge Star Wars nerd. I became hooked on the series as a kid and haven’t looked back since, so in case you’re wondering, yes: I braved the bitter cold and ravenous crowds and went to see The Force Awakens opening night. It was brilliant; I loved the dazzling effects and great throwbacks to the original films. While watching it though, another, deeper thought dawned on me: namely, the close link between the epic tale of Star Wars and that of our salvation through Christ.

Without spoiling too much, The Force Awakens centers around a search. With the evil First Order rising to power in the galaxy, led by the Sith lord Kylo Ren, protagonists new and old are desperate to find Luke Skywalker, the last remaining member of the Jedi order. They feel that Skywalker is their last hope in overcoming the evil spreading through the galaxy and thus restoring the good; in other words, Skywalker is viewed as a savior of sorts.

We also mustn’t forget the Force, the invisible energy which flows through and binds all living things. As Han Solo points out in the film, the Force is thought by many to be nothing more than a fairy tale, but he assures the audience, “It’s real. All of it.” Only certain people are able to use the Force, and a sense of morality comes into play. A disposition to do good works with the Force makes one a Jedi; this is referred to as the “light side” of the Force. To use to the Force for evil, however, sends one down a blackened path to the “dark side” of the Force.

This where the conflict lies in Star Wars, and as a follower of Christ, it sounds awfully familiar. Just as the characters in Star Wars are caught in the midst of a battle between the light and dark sides of the Force, Christians often find themselves entrenched in a similar struggle in the day-to-day task of being an authentic disciple of Christ and choosing between love and sin.

The code of the Jedi order bears some very distinct similarities to the teachings of Christ. Jedi are rigorously trained to be patient in their approach to situations, to never act out of anger or spite, and of course, to use their powers for the benefit of others. The code of the Sith, however, is the absence of all of these things. The Sith act brashly, harbor grudges toward their enemies and use their powers for personal gain. In the Christian’s world, the Sith stand for all that the evil one stands for.

From a human standpoint, becoming a Jedi is a difficult task. We are not naturally patient, but we are naturally selfish. Just as Jesus said in the Gospel of Matthew, “How narrow the gate and constricted the road that leads to life. And those who find it are few.” (Mt. 7:14), the path to being a Jedi is a narrow one. As we saw happen with Anakin Skywalker in the prequel trilogy, it is much easier to succumb to the temptations of the dark side. To fall into sin is a much simpler undertaking; it feels good, it feels natural.

But still, we fight. We are called to fight those urges that sin brings about. Temptation, lust, jealousy…these things lead to the dark side. These lead to a path of temporary fulfillment, lack of self-control, and ultimately, a very deep longing for something greater. Christ is that something greater. To choose the light side means to choose life, and to choose life means to choose Christ, who is love. To be a Christian is to be a Jedi.

And so, my fellow Jedi, turn from the ways of the dark side, go forth into battle with your trusty lightsaber, and please, try not to cut off your hand.