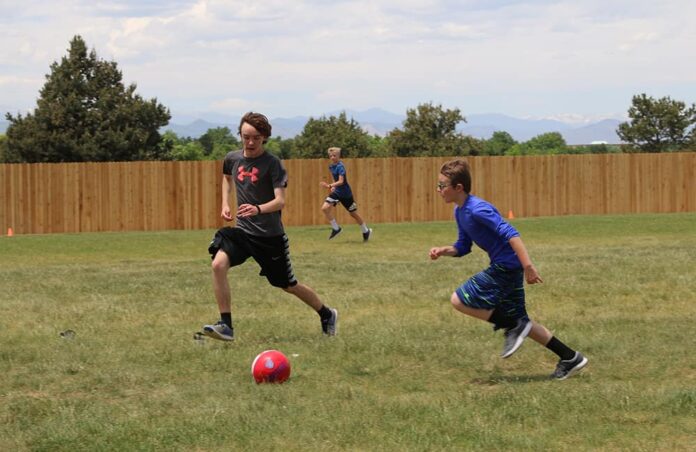 Kylie Klimek’s strong faith gave her the courage to do something many adults wouldn’t — share her beliefs with a neighbor whose family is atheist.

The seventh-grade student at St. Thomas More Catholic School wasn’t afraid to talk to her friend about the Catholic faith, and it resulted in a response she didn’t expect.

“She chose to come to church with us,” said Klimek. “I think it’s really important that she got to do that with me because it probably would have been hard since her whole family doesn’t believe in God.

“I once took her to adoration and she had tears in her eyes because she was so happy that she got to have this time with God in the silence and be able to hear God’s voice,” said Klimek.

The experience made Klimek feel good about sharing her beliefs.

“I’m just proud that I was able to help somebody at least know God — even if it was for a short while,” she said.

St. Thomas More draws in several young people for its youth groups, as well as its annual youth rally — this year called “Into the Deep.” The rally, designed for middle and high school students, took place June 8 at the parish.

In the past, the annual rally was called Guppy Fest. This year’s name change reflected a clearer focus on building a relationship with Christ.

“This year is a lot more intimate, and you get a better connection to Jesus and the things that the keynote speakers are talking about,” said freshman Peter Kelley. “It’s more focused on Christ.”

“Into the Deep” was led by the parish’s youth ministers, and the young people who attended listened to talks, went to Mass, played games and bonded over their faith.

“We don’t get a lot of silence in our daily lives,” said Kelley. “So I just really like this atmosphere.”

As a mentor for the younger kids during the rally, Kelley felt like he could be there to talk and walk with them on their faith journey.

“I have to set an example and do well in how I’m exhibiting my relationship with Christ,” said Kelley. “I think it’s really good for them to get this type of relationship early in their lives, especially he middle schoolers.”

Klimek felt grateful to build a friendship with the younger students more than she is able to during a regular school day.

“It’s really nice that I’m able to help lead them in their faith,” she said.

For Kelley, having a support system of other young people grounded in faith is a gift.

“I know a lot of people come from public schools, and they don’t really have church or faith inside those schools,” said Kelley. “Coming here and having faith and fun intertwined I think is really good for them.

“Having help and having someone to talk to [is invaluable], especially at such a key point in their lives when they’re still being formed and getting ready for high school, which might be even harder,” he added.

Kelley hopes opportunities like “Into the Deep” continue to inspire his peers to strive for a greater trust in God.

“I think it’s very important for youth to be formed the right way and to have a place to come and feel safe with Christ,” he said.