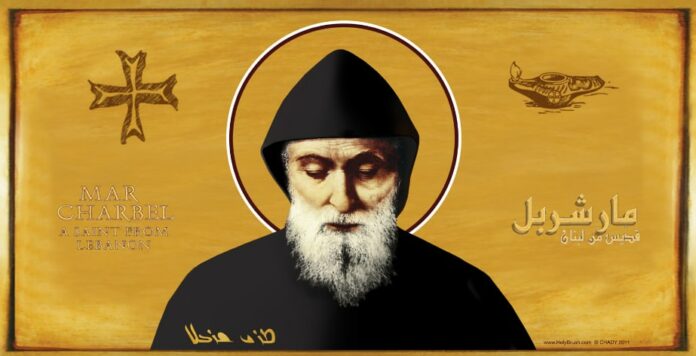 As Pope Francis opened the Extraordinary Jubilee of Mercy this week, which he hopes will be “a time when the witness of believers might grow stronger and more effective,” St. Rafka’s Maronite Catholic Church in Lakewood brought to Denver one such example.

The bone relics of Lebanon’s St. Sharbel Makhlouf, a Maronite Catholic priest, monk, and hermit, are on display at St. Rafka’s from Dec. 8 through Dec. 10, the first few days of the Year of Mercy.

If you don’t know who St. Sharbel is, you are not alone. The monk lived in complete obscurity, spending the last 23 years of his life as a hermit.

If you do know who he is, it’s probably because you heard about the bright light that emanated from his grave for 45 consecutive nights after his death in 1898. His body was found to be in an incorrupt state, and a sweet smelling liquid, which appeared to be a mix of blood and sweat, exuded from his body.

However, Father Sharbel became a saint through a long life of dedicated prayer, manual work, rigorous asceticism, contemplative silence, and a great devotion to the Eucharist. It is said that he spent two hours preparing for the Divine Liturgy (the Eastern-rite term for Mass), and another two hours post-Divine Liturgy were spent in giving thanks.

Born in 1828 in the mountains of northern Lebanon, Yussef Antoun Makhlouf began to pray as a young child while he cared for the family cow in the fields and pastures near his village.

At 23, Yussef left home to become “Brother Sharbel,” taking the name of a second-century martyr at Antioch. After two years, he took his monastic vows, and was eventually ordained a priest. Some 19 years later, the priest-monk was granted permission to live in solitude in a nearby hermitage dedicated to Sts. Peter and Paul.

On Dec. 16, 1898, at the age of 70, Father Sharbel suffered a stroke while celebrating the Divine Liturgy of the Maronite Catholic Church, an Eastern-rite Church in union with Rome. He spent the Christmas novena in agony, until his death on Christmas Eve.

Pope Paul VI presided at the beatification of Father Sharbel just prior to the conclusion of the Second Vatican Council, on Dec. 5, 1965, and he expressed the hope that the example of the “hermit of Mount Lebanon” would help the Christian people “understand, in a world largely fascinated by wealth and comfort, the paramount value of poverty, penance and asceticism, to liberate the soul in its ascent to God.”

What greater example could there be at this time of year—characterized more and more by frenzied shopping and endless “to do” lists—than this saint of prayer, silence and devotion to the Eucharist?

But there is even more to this story, as the visit of the relics of St. Sharbel to Denver also serves as a grim reminder of the dire situation currently facing the monk’s native Lebanon.

Living in the midst of relative peace and exceptional comfort, it’s easy to forget the needs of those living half a world away.

According to Father Andre Mahanna, pastor of St. Rafka’s, there are currently over two million refugees in Lebanon who have escaped the violence of ISIS, and they are “seriously taxing all systems in this small country.”

In October, Father Mahanna launched St. Rafka Mission of Hope and Mercy as a response to some very basic and urgent needs of our brothers and sisters in Christ, such as blankets, food, and clean clothes.

The mission has a team on the ground in Lebanon serving the needs of refugees, and they are contacted almost on a daily basis for assistance.

In addition to the basics, there are medical costs.

According to Father Andre, the mission owes $35,000 in hospital bills since May. That money, however, has paid for cancer surgeries, and treatment for serious chronic diseases. A little goes a long way.

Speaking of which, while the above examples of Christian witness in prayer and works of mercy are extraordinary, sometimes the most effective witness is the little one we give in ordinary circumstances.

In any case, no matter who you are or what your situation, let us all attempt during this Year of Mercy to find a way to make our witness of faith “stronger and more effective.” And I bet a quick prayer to St. Sharbel for some help wouldn’t go unanswered.

St. Rafka Mission of Hope and Mercy will hold a Christmas Dinner and Concert on Dec. 18 at St. Thomas More Catholic Church in Centennial. Proceeds will fund the needs of refugees this Christmas.