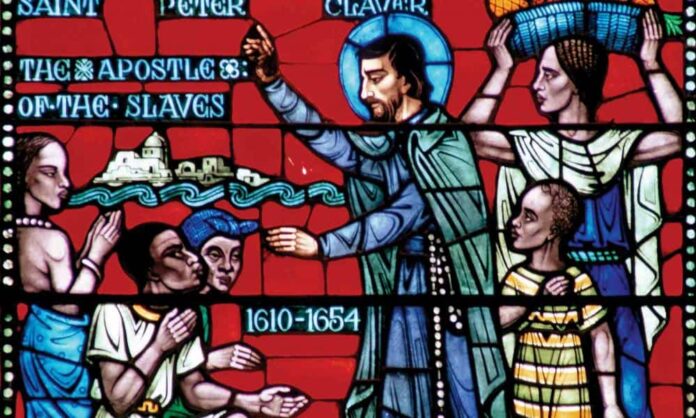 September 9 marked the Feast of St. Peter Claver, a Jesuit priest who ministered to African slaves in Colombia in the 17th century. The U.S. bishops have invited Catholics to observe the day with fasting and prayer for an end to racism in the United States.

Peter Claver was born in 1581 to a devout farming family in the Catalonia region of Spain. He attended the University of Barcelona as a young man before joining the Jesuits at the age of 20.

During his studies as a novice, Peter met and developed a friendship with Alphonsus Rodriguez, an older lay Jesuit brother who performed menial work but was renowned for his holiness and insight. Eventually Rodriguez told Peter that he felt God was calling Peter to the colonies of New Spain in the Americas. Leo XIII would later canonize both men on the same day, almost two centuries later.

Taking the advice of Rodriguez, Peter volunteered for the new colonies, and arrived in Cartagena, a port city in present-day Colombia, in 1610. He continued his studies there and was ordained a priest in Cartagena in 1615.

By that time, the African slave trade had already been in place for several decades in the Americas, for which Cartagena was a major hub. While there, Peter witnessed the cruelty with which the slaves were treated firsthand.

Moved by their suffering, Peter resolved to work to bring both bodily and spiritual aid to the slaves, vowing to be “the slave of the slaves forever.” Despite his own health problems and the language barrier between himself and the constantly-arriving slaves, Peter threw himself into this vocation with great vigor.

As soon as a slave ship would enter the port, Peter would meet it in the harbor and board the ship to care for the terrified and poorly treated passengers on board, who had made the journey from Africa in diseased and cramped conditions over the course of several months. His first priority was to tend to the sick, and to baptize those in immediate danger of death.

He would also travel the countryside from plantation to plantation, visiting the slaves and tending to both their physical and spiritual needs.

When it came to catechesis, because of the language barrier, Peter often used pictorial representations of the truths and biblical stories he was teaching.

True to his vow of being a slave for the slaves, Peter allowed himself minimal amounts of food and sleep. His holiness led to several miraculous occurrences even while he was still alive – such as instances when he healed the sick with the touch of his cloak, or appeared surrounded by a supernatural light during his hospital visits.

Some Spanish royal officials took notice and were impressed by Peter’s work, making their own contributions toward the relief and religious education of slaves. Others found his work bothersome, and many Spanish expatriates in the New World refused to enter the same church or confessional as the slaves Peter Claver was serving.

After suffering from poor health for some years, Peter was struck with a severe fever and died Sept. 8, 1654. He had baptized and taught the faith to more than 300,000 slaves during his forty years in Colombia.

St. Peter Claver was canonized in 1888 by Leo XIII, along with Alphonsus Rodriguez. He is the patron saint of Colombia, slaves, missionary work to Africans, and seafarers.

The feast day of St. Peter Claver is Sept. 9, which was also declared by Colombia as a National Day of Human Rights in his honor.

The legacy of St. Peter Claver is strong in the United States as well, where in the early 20th century the Knights of Peter Claver were founded in his honor in Mobile, Alabama.

The group was founded in 1909 as a Catholic fraternal society for men of color at a time when racism in some parts of the South prevented them from joining the Knights of Columbus, another Catholic fraternity, although this was not an institutional policy.

The Knights of Peter Claver were founded with the goals of supporting various parish, diocesan and community objectives, including serving the poor, creating Catholic community and forming youth. They have worked alongside the National Urban League and the National Association for the Advancement of Colored People for the advancement of civil rights.

The Knights eventually opened auxiliary and junior divisions for women and for young people, and membership is open to people of all races and ethnicities. It is the largest historically African-American Catholic lay organization in the United States.

The pope praised St. Peter Claver during that trip, saying the saint “understood, as a disciple of Jesus, that he could not remain indifferent to the suffering of the most helpless and mistreated of his time, and that he had to do something to alleviate their suffering.”

Black Catholics on the way to sainthood: Ven. Augustus Tolton