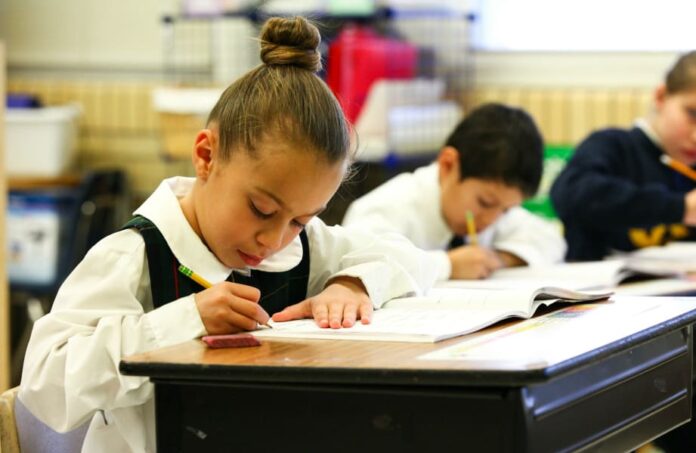 At Masses this weekend Father Robert Reycraft, pastor of St. Louis Catholic Parish in Englewood, will announce the decision to close St. Louis School at the end of the 2015-2016 school year.

Father Reycraft made the decision together with the Catholic Schools Office and Archbishop Samuel J. Aquila.

In a letter written to the parish and school communities, Archbishop Samuel Aquila stated that the decision was a difficult one, but that “after reviewing enrollment and demographic trends, parishes and schools that are nearby, your parish and school finances and other data to assess the viability of the school, I fully believe that this is the best decision for the parish.”

“It is with sadness that this will be the last school year for St. Louis School,” Father Reycraft stated. “I thank the parents who dedicated so much of themselves to our school. I thank Mrs. Hagen, Principal, who worked tirelessly over decades in devotion to the school. I thank the parishioners of St. Louis Parish who supported school activities and all of our many benefactors including the Archdiocese of Denver. I thank all of the teachers and support staff throughout the years.”

The pastor pointed to low enrollment mixed with rising costs as factors that “have brought us to a point where we cannot meet our obligations to continue.”

“St. Louis School has contributed much to the lives of students and their families since 1929,” he continued. “We are all grateful for that.”

St. Louis Catholic School has been impacted by several factors, not unlike hundreds of schools across the country that have had to close. The primary factors affecting the school’s lack of viability are changing demographics, which has led to shortfalls in enrollment and the resources necessary for sustainability.

“St. Louis Catholic School is a hidden gem,” said Principal Pattie Hagen, “but we have not been able to recruit significant enrollment. The small class sizes are a double edged sword in that the scholars receive differentiated instruction however financial it is not a viable reality to sustain.”

The last 15 years have been a time of declining enrollment for St. Louis. Enrollment has dropped to its lowest count with less than 80 students. Additionally, per-student costs have risen to over $11,000, requiring St. Louis Parish to substantially subsidize school operations, which is an unsustainable situation for the parish.

Despite every effort to build enrollment, including the diligent work of the School Advisory Council, make tuition affordable, and raise funds through the support of several generous donors, the recurring and on-going struggle to make the school viable has taken its toll.

“Father Reycraft, the parish, parents and our benefactors have donated much to help us continue our educational  mission but we can no longer ask for such a sacrifice from these parties,” said Hagen.

“St. Louis Catholic School has changed the lives of countless people in south central Denver since its founding in 1929, thanks in no small part to the sacrifice and hard work of the Sisters of St. Joseph of Carondelet, as well as the laity that have staffed the school since 1973,” wrote Archbishop Aquila. “We can’t forget the rich history of this school, and the thousands of children who have passed through its doors.”