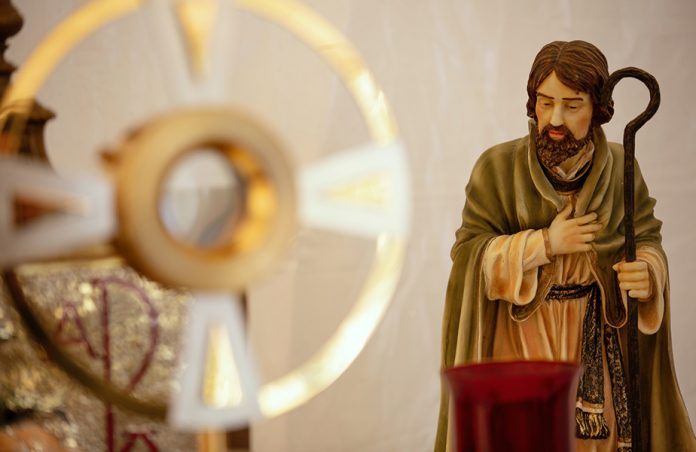 As the Year of St. Joseph came to an end, I found myself reflecting on the example and the call that God the Father issues to men, especially ones in roles as husbands and fathers; and to be submissive to the vocations we receive and to express this submission in cooperation with the graces we receive. St. Joseph stands in today’s world much as he did in the time of Jesus as a silent example of what it means to be authentically masculine and how to lead our families in a way that is radically countercultural.

Protector and Terror of Demons

When we think of protecting those around us, often we think of physical protection. The world is indeed full of many threats that demand physical protection, but we’re called to so much more. If there was someone at our door that wished to do our families harm, I have no doubt we would act to protect those we love. Are we doing the same with the spiritual, emotional and psychological threats that are often more prevalent than physical harm? Every day, the likes of social media, peer pressure and pop culture are avenues for harm that enter the lives of our loved ones, and too often we men are absent in dealing with it. What would Joseph’s response be to the evils of modernity creeping into his home in Nazareth? There is no doubt that the man whom the Church calls the “Terror of Demons” would respond swiftly and directly to these threats.

Every day we lose more of our young people to suicide due to the influence of social media, cyber bullying and other media entering our loved one’s devices. It’s neglectful to be dismissive of the threat that the disordered use of these platforms bring. Our families are often under attack, and these platforms are the medium that the world uses.

Husbands and fathers are called by God and need to be open to standing as gatekeepers against the evil that wishes to enter our families. St. Joseph would not stand idly by and allow his holy family to be attacked, nor should we.

It is reasonable to suspect that St. Joseph had a plan for what his life was to be like. It’s only human to plan and dream about our futures, our families, our career goals and other life aspirations. Joseph was thrown many a curve ball, however, and it started before he was to wed his beloved, Mary. Joseph did not initially know or understand that Mary was to be called to be the Theotokos (the God bearer), he did not know that he would be called to live out his marriage as a continent man with no sexual relations with his wife nor was he to have his own biological children, and he had no idea God would ask him to take his family and flee to Egypt in response to a psychopathic King Herod.

Husbands and fathers are called by God and need to be open to standing as gatekeepers against the evil that wishes to enter our families.

Joseph was open and obedient to hearing the voice of God and transforming his will to be aligned with God as a cooperation with grace. Scripture does not tell us of the interior struggle or feelings that occurred in Joseph’s heart, but we can imagine that he had an authentic human response to these and in the end was submissive to allowing God to be God. What things have happened in our lives that we can relate to these lived experiences of Joseph? Have we been called in a different direction in our professional lives? In marriage, has God challenged us to conform our wills to his due to illness or infertility? Our world tells us not to accept such things and to remake the world and our relationships in our own images; to reinvent ourselves as we see fit. This is not what we’re called to, and this is not of God. Our example here is this saintly man, one that was open and obedient to the mission that the Father called him to. Joseph does not abandon his family to seek his own will, but rather he cooperates with the graces of his vocation to lay down his life in service to them.

This expression of his masculinity is authentic and indeed timely in our age. Husbands and fathers today need to understand that we are living out a vocation, one that is God-given, and to do this in an authentic way means that we must always seek to conform our hearts, minds and wills to that of God.

In Joseph’s will to conform himself to the Father’s will, he allowed the radiance of God to permeate his every action when he was acting in conformity to God. We hear that Joseph was “a just man” (Mt 1:19) and we can infer that this carried into his life long after this part of St. Matthew’s Gospel had gone by. Can we imagine what Joseph was like in his community? Can we reflect in prayer how Joseph was towards his peers and his family? I believe Joseph was a beacon of light to them. Not that he radiated his own light, but rather it was the light of Christ expressed in his divine humanity that must have reflected off Joseph. This experience of God, the proximity to such holiness in Jesus and Mary could only have left Joseph as a changed man. When people encountered Joseph, how did they encounter Christ? When people would meet him in his business dealings or at the market, how did they see the light of Jesus through his actions?

Our world today is most comfortable with a private expression of faith. Keep your images and crucifixes behind your closed doors, we’re told. Let others “live their truth” or face the possibility of being cancelled by society. I’m not advocating making a scene everywhere us men go, but I am saying that we must have the light of Christ permeate all that we do. It must define us in our jobs and in our public and private relationships. We must meet those we interact with in both truth and charity. Our families, our society and the world are in desperate need of this light; and we men are called to allow it to reflect from us through a life grounded in relationship and daily prayer with the Godhead.

We can only imagine what the final moments of St. Joseph’s earthly life were like. I like to think that he was caressed in the loving arms of Jesus and Mary, and as he slipped out of this earthly life, he was embraced by the Father. Joseph’s life was a living oblation to God, not to himself. We need more Joseph’s today; the Church and the world need more men to answer the call to living as other Joseph’s in a world that actively rejects this form of masculinity.

Brothers, today, more than in Joseph’s time, the world needs men to live out their faith in a way submissive to God and to the Church. May you will to cooperate with the graces you have in your God-given vocations to live this out; to the glory of God!