St. John Vianney’s new seminary rector shares his hopes for this year and beyond 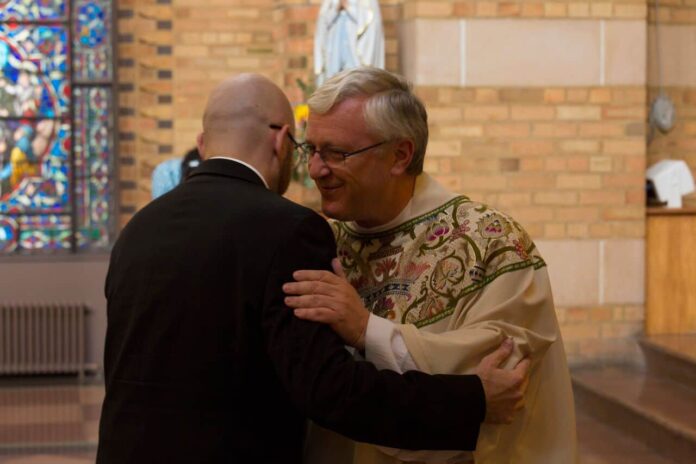 As the school year starts off, so does St. John Vianney Theological Seminary, and this year, Father Daniel Leonard, former pastor of Christ the King Parish who has taught at the seminary for 17 years, begins his first year as rector.

Father Daniel Leonard: I arrived in Denver in February, 2000. Before that, I had spent 14 years in Rome studying and teaching. I was ordained a priest in 1994. During my first six years of priesthood, I was dedicated to the academic life. It was a good life, but I had a desire for a pastoral experience in a parish. The opportunity arose for me to come to Denver. The idea was to help teach philosophy at St. John Vianney Seminary and to be assigned to a parish. My first assignment was as parochial vicar at Sacred Heart of Jesus Parish in Boulder and subsequently to Christ the King Parish, where I served as pastor for the last 12 years. It has been a very rewarding experience for me.

DC: You’ve been a professor at the seminary for 17 years; what are some of the most important things you’ve learned while teaching?

FL: I actually have been teaching in a seminary setting for the past 27 years! I taught for 10 years in Rome at the Pontifical Athenaeum Regina Apostolorum and then for the past 17 at St. John Vianney Seminary. Even though I have taught many different courses in philosophy and theology, the focus of my academic work has been philosophy of religion. I’ve enjoyed engaging with students in trying to answer simple yet complicated questions such as, “What is religion? And why are humans religious?” from an interdisciplinary perspective. Teaching at the seminary is satisfying since we have eager students who are more than willing to learn.

DC: What excites you about this new role as rector?

FL: Instead of having a parish or a territory to pastor, a rector is given an ecclesiastic institution, in this case, the seminary. It comes with the tremendous task of looking after the gift of the priestly vocation which God has placed in the hearts of some men. It is a mission of accompaniment, to help form them in the human, spiritual, intellectual and pastoral dimensions. I like to say that the seminary is the most important parish in a diocese. It is a kind of parish of parishes as we prepare future pastors.

DC: Is there anything that you especially hope to accomplish?

FL: I told the seminarians that, as a seminary, we are given the mission and vision by the Church: Form good pastors. To use a culinary analogy, we all have the same recipe. However, just like individual chefs have a secret sauce or secret method of preparation, each seminary is a little different, each one has its own distinctive flavor. I would like to put emphasis on two of the fruits of the Spirit: Love and joy. Love in the sense that every seminarian should know and be aware that he is supported by a loving community that wants them to succeed in every way. Joy that flows from following the Lord, and of course, the joy of learning.