His Church. Our Experience.
Subscribe
HomeLocalSpreading God’s love, one blanket at a time
LocalParish NewsStories

Spreading God’s love, one blanket at a time 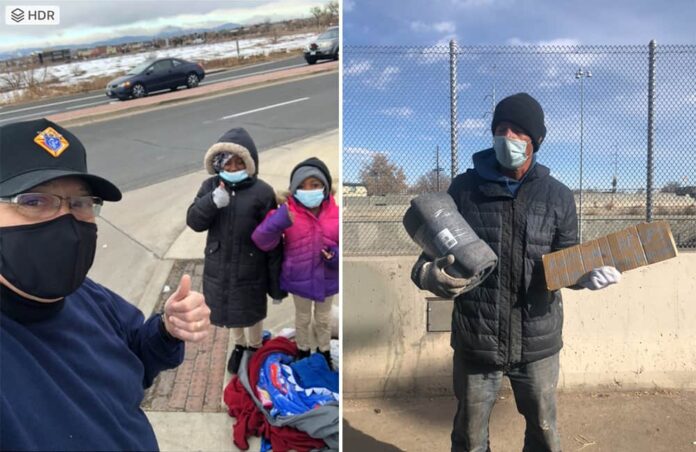 Growing up in the streets of Brooklyn, Patrick Lubrano knew what it was like to see people living on the streets and being cold in the winter months. You could see him taking an extra sandwich or a blanket on his way to school to give to a person in need. Years down the road, this intense call to help the poor developed into a ministry that now provides meals and clothing for many people in need in the Mile-High city.

“We were raised that way: you help when you can. We knew it was an essential part of our faith,” said Lubrano, parishioner at Assumption Parish in Denver and a fourth-degree Knight of Columbus. “We are all different, whether it’d be because of culture, nationality, religion or political views, but we are all human beings and need to help each other out, regardless of where you come from or your beliefs.”

Even though his personal ministry of bringing blankets and food to the poor was in a way present from his childhood, it was in 1994 when he started doing it more consistently and intentionally.

“I would find homeless people in the area, and every time I had extra money, I’d load up my car and bring them food and clothing,” he said.

He did it for five years until he moved to Arizona. But the ministry didn’t stop there, it only changed according to circumstances. The district where he worked bordered a complex with an impoverished community, and he knew he couldn’t keep his arms crossed.

He started bringing them food throughout the year, but especially for special dates, like Thanksgiving, Christmas and Easter, with the help of other coworkers. He also organized parties for them three times a year. When he started working for the Phoenix Suns, the Suns and the Arizona Rattlers even started giving him toys and clothes for the children.

Yet after moving back to Brooklyn and returning to Arizona a year later, he found that the complex had been demolished and the people had been scattered.

When Lubrano and his family moved to Denver just over three years ago, he also brought his mission to this city, but had an encounter that pushed him to do more.

“When I got here to Denver, I saw the growing population in the streets of Denver,” he said. “I saw a man freezing with a sign that read, ‘Anything helps.’ As I gave him a blanket, he noticed my Knights of Columbus baseball cap and asked me, ‘What council are you with?’, and then told me, ‘I’m a former priest.’”

Taken back by his response, Lubrano asked him to get in the car so he could help him, but the man replied, “It’s ok, I just love being Catholic, and I love what you’re doing right now. Thank you.” So Lubrano gave him two more blankets, $20 and his phone number before leaving.

“It just overwhelmed me to see one of my own suffer like that,” he said.

This experience prompted him to reach out to the Grand Knight of his Council and seek support to give blankets to the homeless in Denver. The council funded the first few hundred dollars to buy blankets, clothing and food.

Knowing he had to seek support from more people, he started a GoFundMe page and in a few months went from raising $500 to around $4,000, affording close to 500 blankets, plus food, shirts, socks and more.

“I’m compelled to do it because I see the need. I don’t give up on anyone, I believe in second and third chances,” Lubrano said. “I also want people to see that Catholics are good people and that the Knights of Columbus help so many.”

It’s mainly Lubrano himself who visits the homeless and hands out blankets, clothing and food. His experience as former law enforcement has helped him do it safely, since he acknowledges that, at times, the ministry requires him to put himself in vulnerable situations. Nonetheless, in his interactions, he has mainly seen people’s gratitude and amiability.

“Sometimes when I see someone on a bench or on the floor, I stop to see if they’re OK, and then I ask if it’s OK to give them a blanket or a pillow. The fear is that people are freezing to death in the streets,” he said.

“It’s overwhelming at times because I’m by myself, but my wife is so supportive. Sometimes I go out at 9 p.m. and my wife says, ‘But it’s freezing out!’ And I say, ‘That’s why I’m going out, because it’s freezing.’ And she’ll just smile and say, ‘Just be careful.’”

Lubrano knows that sometimes Catholics feel a deep longing to help but are overwhelmed because they don’t know how to do it or where to begin. But he added that it’s not always necessary to do it in person like he does.

“Start in your church to see if they’re collecting clothing or food. Help your food banks. There’s a lot of people struggling financially right now, help them in some way,” he added. “But to see the need of these people and to not do anything about it, that’s a tragedy if you have the ability to help.

“I would like people to know that the Catholic Church and the Knights of Columbus are solid, and we are here to help. If you need to reach out to us, then reach out to us. Reach out to the Knights of Columbus Council at your parish,” Lubrano concluded. “I say to all my fellow Catholics, if you see somebody struggling, find someone who can help them, send them to Church, shelters, food banks… If we did that as a whole community, we’d be helping everyone.”

Vladimir Mauricio-Perez
Vladimir is the editor of El Pueblo Católico and a contributing writer for Denver Catholic.
RELATED ARTICLES
Advent