His Church. Our Experience.
Subscribe
HomeLocalSisters offer spiritual motherhood to those they serve
Local

Sisters offer spiritual motherhood to those they serve 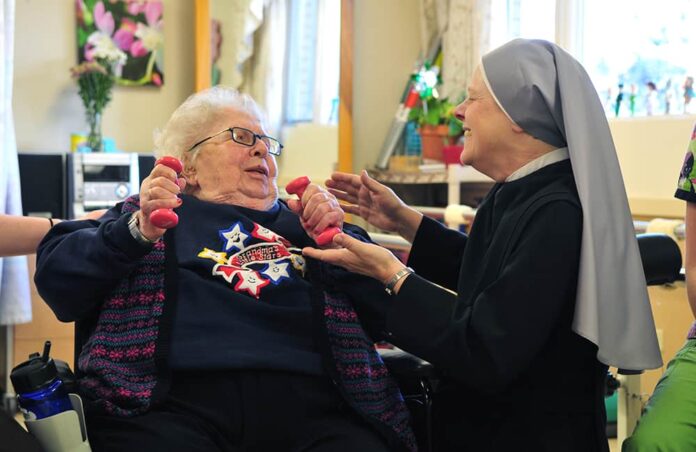 When Sister Joseph Marie Cruz was a child, her family lived near the Mullen Home in Denver where the Little Sisters of the Poor serve the elderly in need, and she and her sisters visited often.

“I used to love to comb the residents’ hair and talk to them,” she said. “It was such an enrichment listening to their stories and seeing the Sisters care for the residents. It was such a beautiful feeling that I wanted to be a part of it, too.”

Lo and behold, years later Sister Joseph Marie followed that inclination and joined the Little Sisters of the Poor, a vocation she has been living out for 43 years.

The Little Sisters of the Poor are one of several religious orders in the Archdiocese of Denver where women give themselves to God.

And although they will never have their own children, these religious women take care of all sorts of souls entrusted to them — often sacrificing their own comforts to bring them closer to God.

Sister Maris Stella Karalekas, one of the Sisters of Life, felt called to religious life but never expected to serve in the way she does now.

“When I met our community, I couldn’t believe that it existed in the Church and in the world,” said Sister Maris Stella. “They have this charism of the dignity of the human person, that every human being is sacred — and not for anything that they can do or produce, but because they’re created and loved by God and held into existence by his love.”

The Sisters of Life serve pregnant women who live with them at their convent, offer post-abortive ministry and evangelize on college campuses, specifically to young women.

“It’s really helping to discover the beautiful women God created them as,” said Sister Fiat Marie Hayes, “and helping them to live out that identity rather than anything the culture tells them.

“When they live out of that reality, they live their lives in meaningful ways, and they don’t squander gifts that have been given to them,” said Sister Fiat Marie. “They don’t fall into traps that the culture has.”

The Sisters are inspired by those they work with, especially the mothers.

“Seeing the sacrifices that they’re willing to make for their children inspires us to make sacrifices for our spiritual children,” said Sister Maris Stella. “I think we can learn from one another.”

Sister Maris Stella is amazed especially by young moms who bring their children to Mass each weekend.

“I think her prayers must be so valuable to the Lord and so precious to God because she’s really giving all she has to her children, and, in that way, giving it all to God,” she said.

It’s really beautiful to accompany the residents through their life. It’s a powerful witness of the culture of life, and our consecrated hospitality is a witness to the mercy and compassionate love of the heart of Jesus.”

On the opposite end of the spectrum, the Little Sisters of the Poor accompany the elderly facing the end of their lives. The order in Denver has been serving those in need for 101 years.

“We care for the residents, we accompany them through their joys, through their sorrows, through their expectations,” said Sister Joseph Marie. “At the moment of the dying process, they’re never alone because a Little Sister is always with them.

“It’s such a beautiful atmosphere,” she continued. “Other residents see this and say to themselves, ‘At that moment, I don’t have to be afraid because there will be a Little Sister holding my hand and helping me pass from this life to the next.’

“We’re there giving spiritual birth to the residents to go to heaven,” she said.

Although they don’t have husbands to rely on, the Sisters feel they get all they need from God. Sister Joseph Marie has witnessed the help of St. Joseph, the order’s patron, several times, including when the Sisters were serving at their home in Peru.

“We were going to serve [our residents dinner] and then the gas line went out,” she said. “We didn’t have any hot food.

“At that moment, there’s a neighbor that knocked on our door and said she had cooked too much food, so she brought some food and it was enough for all six of us for dinner and supper,” she said. “It just brings tears to your eyes and goosebumps because or God’s love, and St. Joseph always provides for us.”

Both orders feel fortunate to convey that love to those they serve.

“In our vocation, we’re very privileged to be able to walk with people in the important, intimate details of life,” said Sister Fiat Marie.

“It’s really beautiful to accompany the residents through their life,” she said. “It’s a powerful witness of the culture of life, and our consecrated hospitality is a witness to the mercy and compassionate love of the heart of Jesus.”