His Church. Our Experience.
Subscribe
HomeLocalSisters of Life set sights on Denver
Local 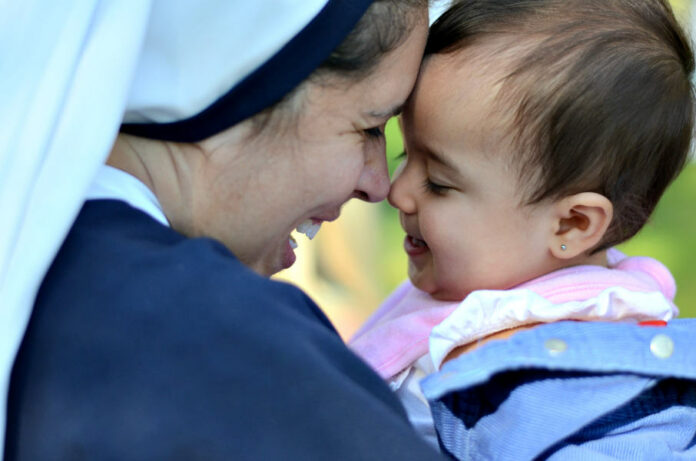 The New York-based Sisters of Life announced plans on the Feast of the Annunciation to bring their mission work to Denver this summer.

Four sisters will be sent to witness to the dignity of life and join the Archdiocese of Denver’s mission for the new evangelization. It will be the order’s first mission in the Western United States.

“We are so pleased and excited with this expansion of mission,” Mother Agnes Mary Donovan, S.V., superior general of the order, told the Denver Catholic. “While there is great vibrancy within the Church of Denver, we believe that we are prepared to offer the unique gift of being a visible witness to the Church’s proclamation of the dignity and mystery of every human life. Please join us in praying in advance for the fruitfulness of this new apostolic expansion.”

“We desire to create a spiritual home for the culture of life, and as a vital part of this work to provide concrete options of loving support for any college-aged woman who finds herself pregnant and in crisis,” Mother Donovan said.

The order’s announcement came at the same time the Missionaries of St. Charles Borromeo announced plans to arrive in Broomfield in August to begin a mission.

“The arrival of two new religious orders to the Archdiocese of Denver during the Year for Consecrated Life is a great blessing for the faithful of northern Colorado,” Archbishop Samuel Aquila said. “It is evident that God has a clear plan for these two young orders of sisters here in the archdiocese, and we are more than willing to assist them in any way.”

The archbishop dedicated the religious communities to Mary.

“I give thanks in a special way to Our mother Mary for bringing these two vibrant communities to the archdiocese,” he said. “I place both communities in her hands and commend them to her protection and guidance.”

The Sisters of Life will serve the most vulnerable or those in need of spiritual support and encourage a return to the Lord’s mercy, Mother Donovan said.

The Sisters of Life, founded in 1991 by John Cardinal O’Connor, is a contemplative and apostolic religious community of women with convents and mission centers in New York, Connecticut, Maryland and Ontario, Canada. The nuns—recognizable by their blue and white habits—take traditional vows of poverty, chastity and obedience and an additional vow to protect and enhance the sacredness of life.

In July 2014, two Denver women shared their call to religious life and joined the order. Kate Sweeney, previously program director of ENDOW (Educating on the Nature and Dignity of Women), and Teri Tolpa, an Augustine Institute graduate, began formation at the order’s convent in New York City in September.

While the names of the sisters coming to Denver have yet to be announced, Mother Agnes said the nuns are excited about expanding to the city where St. John Paul II proclaimed the new evangelization.

“Many of our sisters were actually present at World Youth Day 1993 in Denver and heard Pope John Paul II speak those words at the closing Mass at Cherry Creek State Park, which still burn in their hearts now as mature religious,” she said.

The pope spoke of the liberating message of the Gospel and the mission to proclaim it to the ends of the earth—a message that’s foundational to the order’s charism to educate others on the unique and unrepeatable gift of life.

While prayer is the sisters’ first mission, Mother Donovan said a calling to serve in Denver became clear over the last few months.

“As a community, we have been discerning and planning for a new foundation for the past couple of years,” she said. “Within the last few months, entrusting our deliberations to the Holy Spirit and in conversation with Archbishop (Samuel) Aquila, the Church of Denver emerged as the site of this foundation.”

Mother Donovan said she plans to visit the sisters as they begin in Denver.

“We look forward to coming to know more deeply the city and the Archdiocese of Denver,” she said.

Learn more about the Sisters of Life.