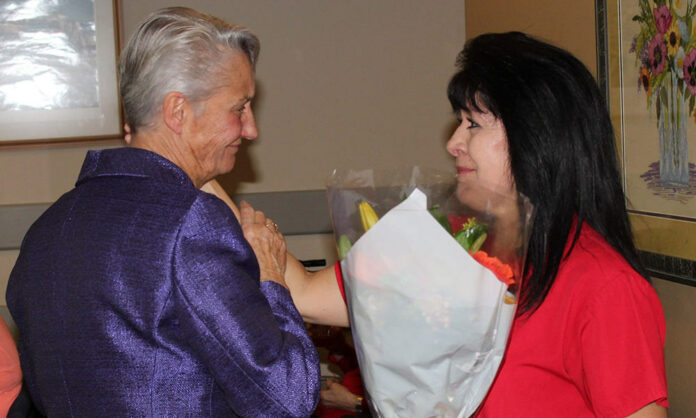 After 21 years ensuring the spiritual needs of residents at the Gardens at St. Elizabeth in north Denver were met, Sister Jackie Leech, S.C., has retired.

“It was time,” the energetic Sister of Charity of Cincinnati said. “God was just saying, ‘Move on.’

“I felt it would be good,” she continued, “for [the Gardens] to have someone new with fresh ideas.”

Among the 200 seniors who call the Gardens home are several priests, which was the case throughout Sister Leech’s ministry there.

“I found it an honor to work with the priests,” the 73-year-old nun said, noting that while she was careful to respect the fact they were retired, she also felt a responsibility to make sure they could celebrate the sacraments.

“That’s what they were ordained to do,” she explained. “When I needed them … they were right there every single time. They were just wonderful.”

As chaplain at the Gardens, Sister Leech was in charge of coordinating Masses and other sacraments for the residents, 96 percent of which are Catholic.

“It was like a little parish,” she said. “The Gardens is a wonderful community of faith-filled residents and staff.”

Born in Pittsburgh, Sister Leech’s family moved to Denver when she was in second grade. She met the Sisters of Charity of Cincinnati while attending Cathedral High School. After graduation, she entered the order whose charism is living out St. Paul’s declaration, “The love of Christ urges us on” (2 Cor 5:14).

She has a bachelor’s degree in English, a master’s degree in theology, a certificate in gerontology, completed a clinical pastoral education program and is board certified by the U.S. Conference of Catholic Bishops for chaplaincy.

Prior to serving at the Gardens, Sister Leech taught at her alma mater several years during the time it transitioned to Central High School, then served seven years as vocations director for the Denver Archdiocese before switching to pastoral care.

“I went to Our Lady Mother of the Church in Commerce City and became pastoral associate,” she said.

After 11 years in Commerce City, she entered a yearlong clinical pastoral education program that included working with residents at an assisted living facility.

“I fell in love with those people,” she recalled. “That’s when I decided I wanted to work with the elderly.”

Upon completing her program, the Gardens posted their first fulltime chaplaincy position and she got it.

“It was providential,” she said with a smile, noting that many of the priests she served at the Gardens she knew from her time as vocations director.

“The best thing about the Gardens that energized me, nourished me and made me happy was my deep relationships with the residents and staff,” she said. “The flip side of that was when a resident would die or when they would have to move to a nursing home—that broke my heart.”

She retired Jan. 4, the feast of St. Elizabeth Ann Seton, foundress of her order. “That’s the day all the sisters come over to the Gardens and we renew our vows together,” she said, adding it seemed the appropriate time to move forward with whatever God calls her to in this next chapter of her life.

“The best thing about the Gardens that energized me, nourished me and made me happy was my deep relationships with the residents and staff. The flip side of that was when a resident would die or when they would have to move to a nursing home—that broke my heart.”

“I’m going to pray and play more,” she said. “I’m going to do more biking, skiing, hiking, reading and visiting friends and family.”

“She worked for me [her first] year in Commerce City,” he said. “She was beloved there, the people had great respect for her.

“That was also true [at the Gardens] not just of the priests but of all the people she served there,” he said.

Her vocation as a religious sister gave her a unique bond with the priests at the Gardens.

“In a sense, she was a Sister-sister [to them],” Msgr. Schmitz said. “They were very much in her heart.

“She will be dearly missed,” he added, “but I’m sure she won’t stop being active.”

He’s right: as the only nun chaplain with the Denver Police Department, where she has volunteered 20 years for District 1, Sister Leech aims to continue that ministry and hopes to get involved with Special Olympics.

“It was very difficult for me to leave the Gardens, but I know it’s the right thing to do,” she said. “Knowing the residents’ names, their families, a little about their history—being part of their lives and having them be part of my life was a wonderful ministry.”