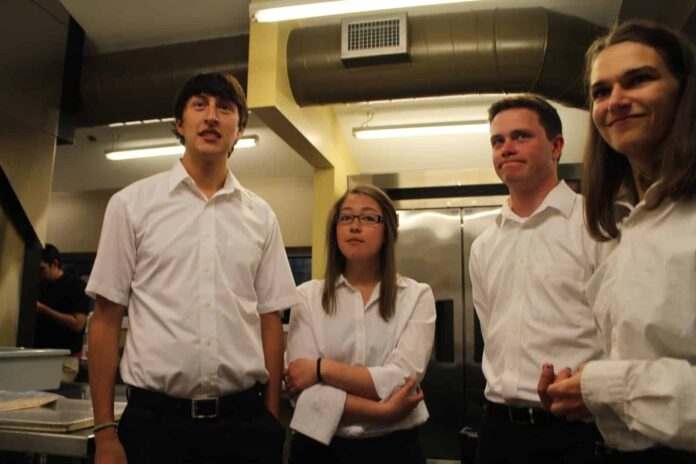 Students and alumni of Colorado School of Mine’s Catholic Campus Ministry gathered on April 10 to learn how to better live the Catholic faith as engineers.

Father Matt Book, pastor of St. Joseph’s in Golden, in whose boundaries the college falls, said the purpose of the night was, “to raise funds for campus ministry, raise awareness of what we’re doing, and have our alumni be around each other.”

He invited Dr. Darrin Muggli to speak. Muggli is the chair of the Engineering Program at Benedictine College in Atchison, Kan. Muggli said he was happy to speak at School of Mines, as he and the campus ministry share a common goal.

“I’m trying to provide a place where students can come to a great Catholic college and get an engineering degree. They’re trying to provide Catholic formation on a secular campus. We’re two sides of the same coin, really,” Muggli said.

He said that given the jobs engineers hold, it is crucial that they be well-formed.

“Engineers have these key positions in their companies, between the upper-level management and the workmen. It’s very important that they uphold the dignity of workers,” Muggli said. “We absolutely need more solid, Catholic engineers.”

Participants paid to come to the dinner and took part in a silent auction. All of the funds will go to strengthening the School of Mines Catholic Campus presence. Specifically, they hope to use the funds to purchase space for them to meet. While they already have a Catholic men’s household, but would like to create a household for women on the same property. They also hope to create a sort of shared meeting space between the two.

“Campus ministry requires space for people to come together, where people can share lives and pray together,” Father Book said.

Father Book, who worked as engineer before entering seminary, said he hopes the dinner helped the Catholic students to see the value of their work.

“I would hope that the first thing [the students and alumni] walk away with is an understanding that whatever work we do is something we can offer to God. I hope they have a supernatural vision of their work, and don’t see it simply as a task for a paycheck,” Father Book said.

Joey Schmitz, a sophomore at School of Mines, said that he is inspired by seeing people from engineering backgrounds, like Father Book and Muggli, who live their faith.

“It’s really nice to see that there are people in the industry today that are still active in their faith life. It’s a sign of hope to me that when I get to that stage in my life, I’ll be able to do that, too, because I’ve had so many examples,” Schmitz said.