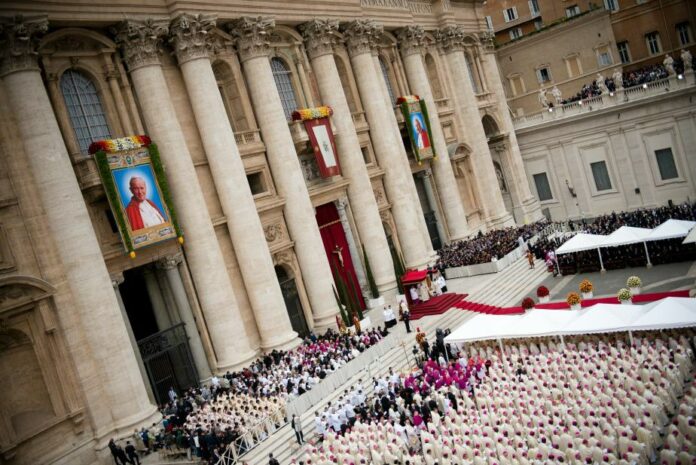 ROME—Among the 800,000 faithful crowded in and around St. Peter’s Square for the April 27 canonization of two popes were most of the Denver archdiocese’s pilgrims. The 45-member group who took part from a side-street felt blessed to do so, citing the experience of the universal Church, the event’s historical value and small “miracles” they encountered.

After making their way toward St. Peter’s in the pre-dawn hours hoping to get a spot inside the square to witness the canonization of Popes John Paul II and John XXIII, the Denver group was dispersed by massive crowds onto the streets where the 10 a.m. Mass was shown via a large screen. Some stood for hours, some sat with no view of the screen—but they said the experience was worth it.

“I was so glad I was here!” said Agnes Schmerge of St. Peter Church in Greeley. “It was a great experience of the universal Church with all the different countries represented and the songs and prayers you heard in different languages.

“I liked everything; even the pushing and shoving was expected with numbers like this so I wasn’t let down.”

With temperatures in the 60s under a pale sky, pilgrims were grateful there wasn’t more than a brief sprinkle of rain prior to the Eucharist starting.

“Right after the canonization, the sun came out,” Schmerge said. “It just cleared nice and bright. It didn’t last too long, but it was wonderful.”

Pilgrims saw it as a glimmer of God’s approval.

“I noticed that at the moment of consecration the sun came out, too,” added Noël Stewart of Sacred Heart of Jesus Church in Boulder.  “There were these little ‘miracles.’

“I couldn’t see the screen so I just put my head down and prayed for all the people whose intentions I carried, and I was filled with peace.”

That she was surrounded by some of her fellow archdiocesan pilgrims was another “miracle” for Stewart that gave her comfort. And where in other situations the close quarters and high excitement could lead to altercations, Stewart saw peace brought about through prayers said by other pilgrims around her.

“Prayer is a powerful weapon,” she said.

Like the others, Patrick Lana of Christ on the Mountain Church in Lakewood was appreciative of the universality of the Church he experienced and by the peace he encountered.

“What I found most interesting is when we all said ‘Peace be with you,’ it didn’t matter what language you spoke, we all understood and saw it in each other’s eyes.”

Emily Keller, event coordinator and an organizer of the pilgrimage was among those who were in awe at taking part in the historical firsts of the event: the dual canonization of two popes and that it was done by Pope Francis in the presence of his predecessor, Benedict XVI.

“I stood with no room to move for hours but when I saw Pope Francis on the big screen I just burst into tears,” she said. “I thought, I can’t believe I’m really here for this historic moment!”

Roxanne King
Roxanne King is the former editor of the Denver Catholic Register and a freelance writer in the Denver area.
RELATED ARTICLES
Canonization