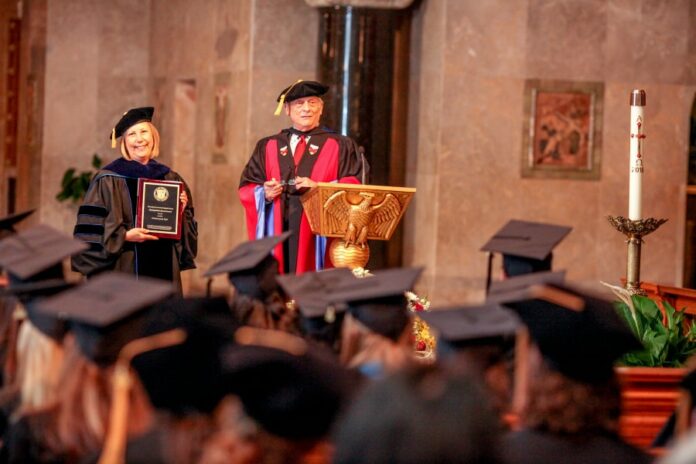 As a psychologist helping to form Denver seminarians, Christina Lynch is like a stethoscope in God’s hands working to heal their hearts, she said.

Lynch was recognized for her achievements and work as a conduit of healing for young men preparing for the priesthood. In May at the Basilica of the National Shrine in Washington, D.C., Lynch was presented with the first Distinguished Alumni Award by the Institute for the Psychological Sciences (IPS)—where she was also the first student to receive her doctorate—for her contributions to society and excellence in the field.

Paul Vitz, professor emeritus of psychology at New York University, presented the award at an IPS graduation Mass when Lynch also delivered the alumni address to the graduates. She was also recognized for her continuing leadership as president of the Catholic Psychotherapy Association.
The award and her work for St. John Vianney Seminary is exemplary, said seminary rector Father Scott Traynor.

“What has been established (at the seminary) under her leadership is a model for seminaries around the country,” Father Traynor said. “Those unique contributions she’s made are recognized by IPS in offering her that award. It’s duly deserved.”

Journey to the seminary
Lynch’s path to become a licensed clinical psychologist did not begin with the goal of helping seminarians. Initially, she sought a doctorate in psychology to help heal post-abortive women. She counseled women for a time when she opened a home for them with her husband in California. Then her eyes were opened to a call to help serve men studying for the priesthood, she said.

“In formation, what I realized was if you can help one priest or one future priest know himself through the eyes of the Lord and help remove any human obstacles in that area to open their spiritual life … then they can serve and be healing instruments, not only for their parishioners, but especially for people who are struggling with post-abortion syndrome,” Lynch said.

Her journey led her to St. John Vianney Theological Seminary, where more than 100 men are studying for the priesthood in the Archdiocese of Denver and other dioceses. She said for nine years her focus of offering psychological healing based on Catholic anthropology is aimed to help young men “know themselves and have a more intimate relationship with the Lord.”

“In the seminary you have a lot of people who are contributing to the formation of the future priest,” he said. “The counseling services we offer fill a critical role in that human formation. This is one of the real challenges in priestly formation is this human formation and how the Church understands it.”

“Everyone knows grace builds on nature,” he continued. “Chris Lynch, in her counseling services, offers what we can call human growth counseling—how to help a man in his various human qualities to grow and be healthier so that grace has the healthiest foundation in his natural capacities to build on.”

Part of that human formation involves helping men see themselves as made in the image of Christ. Lynch said modern secular culture can damage a healthy self-identity.

“The culture forms us to believe that our identities are based on what we do, what we feel, and what we think,” she said. “When in reality the only identity we’re created to be is a beloved child of the Father. If we knew that and believed that these other labels or identities wouldn’t confuse us as they do in culture today.”

More than 80 percent of the seminarians at St. John Vianney seek her aid—counseling is not mandated for the men—to understand how cultural distortions may manifest in their lives and take them to prayer so Christ can heal.

“They come totally on their own,” Lynch said. “Having that open door policy which remains confidential within formation—it gives the man an opportunity to take responsibility for his own formation in a more offensive rather than in a defensive approach.”

The valuable program Lynch offers seminarians, and her own dedication to the Church, is a model for others, Father Traynor said.

“Chris has a deep love for the Church, love for the faith and reverence for the priesthood,” he said. “You put that all together and she’s an amazing person.”