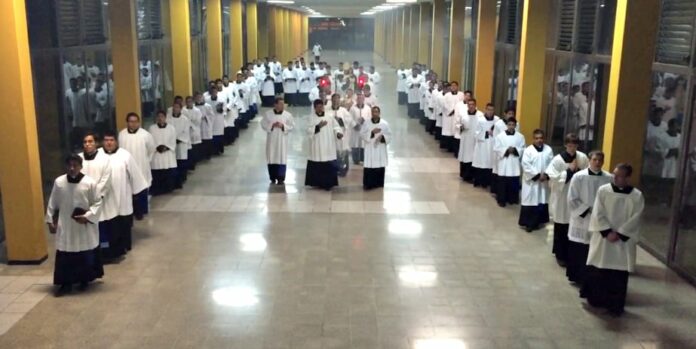 Father Jim Crisman said in the past, seminarians have gone to Puebla, Mexico, and stayed with host families. This year, the seminarians were welcomed into Puebla’s Seminario Polifoxiano.

“This is much more appropriate for a seminarian, as it addresses the four pillars of human, spiritual, intellectual and pastoral formation,” Father Crisman said.

He said the goal of the program was to help the seminarians communicate in social situation, understand the history, the culture, and especially the popular piety. He hopes that all of this will help them serve Denver’s many Hispanic Catholics.

“We want them to be able to pick up the missal, or the ritual rite for baptism or marriage, in Spanish and just be able to go with it,” Father Crisman said.

Daniel Wolbach was one of the seven seminarians in the program. He said the experience required a complete immersion.

“It was my first time doing anything out of the country, so at first i really didn’t have any idea of what to expect. The first week of adjustment was kind of hard, because I was in a new country and I had very little experience of the Spanish language, so I really hit the ground running,” Wolbach said.

The seminarians began training shortly after Memorial Day. They spent a week at St. John Vianney, learning the fundamentals of Spanish grammar, and how to say the Mass and Liturgy of the Hours in Spanish. Then they went to Puebla, where they remained until Aug. 2. They began their Puebla immersion by spending 20 hours a week in the classroom. Outside of that, they were with other seminarians.

“We’re living at the seminary, so we’re around formators and seminarians for a month. We were able to see how they interact with each other, and the formation of the priest down in Mexico,” Wolbach said.

They spent their weekends at parishes, serving Mass and teaching catechesis. They then broke into mission teams, doing pastoral immersion in the mountains. Wolbach said this helped him learn about Hispanic piety.

“It definitely helps to understand the devotions that the Hispanic community has. It’s not just Our Lady of Guadalupe—it’s St. Jude, St. Charbel. They also have some common prayers after Mass,” Wolbach said. “It also helped me understand how to minister to Hispanics. They’re so family-oriented. You’re never just ministering to one person.”

Archbishop Samual Aquila also spent the month in Puebla, improving his Spanish. Crisman said the entire project was due to the hospitality of Puebla’s Archbishop Víctor Sánchez and his desire to help Denver clergy serve the Hispanic population.

“He was unbelievably generous. When he heard how many Hispanics we have, he just wanted to help,” Father Crisman said.

Father Crisman said he hopes they can continue this program in the future.

“Having our seminarians learn this can be life-altering,” he said.