His Church. Our Experience.
Subscribe
HomeLocalSeeds being sowed for new parishes
LocalParish News

Seeds being sowed for new parishes 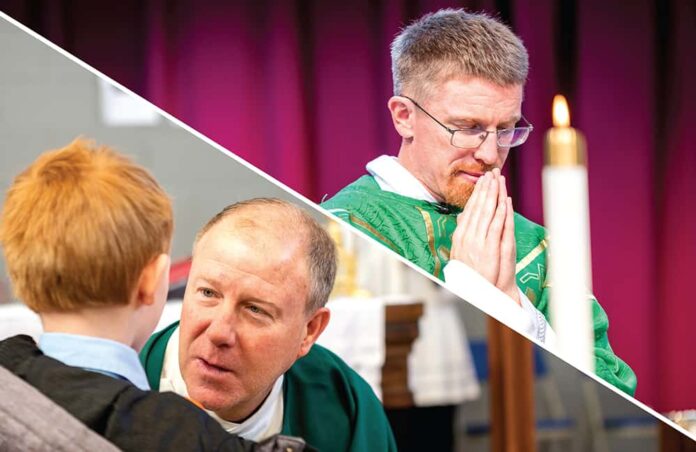 “It’s not that often that bishops are able to announce the kind of good news I am about to share with you,” Archbishop Samuel J. Aquila wrote in a column penned in November 2017, announcing the process of opening two parishes in Denver in response to the growing population.

Nearly two years later, both of these parish communities — St. Gianna Beretta Molla in Green Valley Ranch and St. John Paul II in Thornton — have grown both spiritually and in numbers, and they are hoping to break ground on their permanent homes soon.

Both pastors shared with the Denver Catholic about the challenges of building a church from scratch, its progress and the growth they have seen in their communities.

Celebrating Christmas, New Year’s, Ash Wednesday and the Holy Triduum at the Holiday Inn has not kept Father Jason Wunsch or the growing community at St. Gianna Beretta Molla Parish from practicing the mysteries of the faith with devotion.

“It was kind of tricky figuring out the whole Triduum at the Holiday Inn, but we had some beautiful liturgies”, said Father Wunsch, pastor of the new parish. “A lot of the employees from the Holiday Inn know us now, some of them are Catholic and some of the guests were able to go to Mass.”

Now, despite meeting at the Omar D. Blair Charter School cafeteria for Sunday Mass, the parish community continues to grow, and it is getting closer to acquiring a piece of land in Green Valley Ranch to finally set foot on.

The parish currently has two Masses, one in English and one in Spanish, and is looking to add a third Mass in the near future. Each has an attendance of around 200 people.
“It really feels like a family, which I think is a product, especially, of the core people that are growing in their faith,” Father Wunsch assured.

In fact, he believes focusing more on quality over quantity is much better, especially in the early stages of a growing community.

“As far as participation, it’s excellent… There’s 200 people on a big day at the English Mass and 40 of them are coming to Bible Study,” he said.

With the faith community growing, Father Wunsch hopes the church can be built soon.

The parish had closed on a three-acre piece of land because nothing else was available at the moment, but after another much bigger piece of land went up for sale nearby, he set out to negotiate.

“It would allow us to build a bigger church and possibly in the future have land for a school,” he said, referring to the fast-growing population of the area. “It’s looking very bright.”

In the meantime, Father Wunsch hopes to fundraise enough money to hire an employee and keep building the new community of faith.

“I’m hoping our parish will continue to grow in the penetration of our faith and in relationship with God,” he concluded. “I think we always want to be like Gianna: a cheerful light… She found God in the grittiness of life, in the real mundane, into the present moment. That’s real holiness.

“We want to evangelize as she did.”

Nearly 20 miles northwest of Green Valley Ranch, another new parish community has been growing under the direction of Father James Spahn.

About three years ago, as pastor at Immaculate Heart of Mary in Northglenn, Father Spahn told Archbishop Aquila his realization: “We need a new parish up here.”

IHM had grown to have over 6,400 families and the city was expanding day by day.

A year later, he was already celebrating Mass for the St. John Paul II quasi-parish at a new property purchased by the archdiocese, which is now the home of Frassati Catholic Academy.

“… Many parishes are closing [around the country] and here we are with a new parish,” Father Spahn said. “My hope is to build the people and form them as intentional disciples. That’s the first and most important [thing] before we actually build a building that we call church.

“We’re following the inspiration we’ve received from the Holy Father of intentional discipleship, evangelizing, sharing the love of Christ…”

With a capacity of nearly 325 people at Frassati’s cafeteria, he assures he is ready to start a third mass and hopes to start building the new church in Thornton as soon as possible.

The new church will be built on eight acres out of a 24-acre piece of land at 144th and Detroit that parishioners from IHM donated to the archdiocese years ago. The rest of the land will be used by the archdiocese for a future project that is to be determined.

Father Spahn is working with architects to develop a master plan that would be implemented over many years, following a similar method to the one he used when he was pastor at Our Lady of the Valley in Windsor.

“[I want to build] a beautiful church to worship, a parish hall, meeting space for different ministries and groups… to have outdoor Stations of the Cross, and a prayer garden outside because the property sits on a hill [and provides] an unobscured view of the mountains to the west,” he said.

Although fundraising is especially difficult when a community is confined to a limited space and structure, Father Spahn trusts that God will send generous donors to help the parish building become a reality.

He especially entrusts the parish community and the new plans to the parish’s patron saint, John Paul II, whom he met personally during World Youth Day ‘93.

“I’m very happy Archbishop [Aquila] picked St. John Paul II… Cardinal Stafford asked me to be the driver for the president of the Pontifical Council for the Laity, Cardinal Eduardo Pironio, and wherever I was with [him], there was the Holy Father. So, every day I was with the Holy Father.

“What a blessing that the Archbishop and I got to have the naming of this parish after this wonderful saint that we got to know in a wonderful way in WYD in Denver.”