Saints in the making 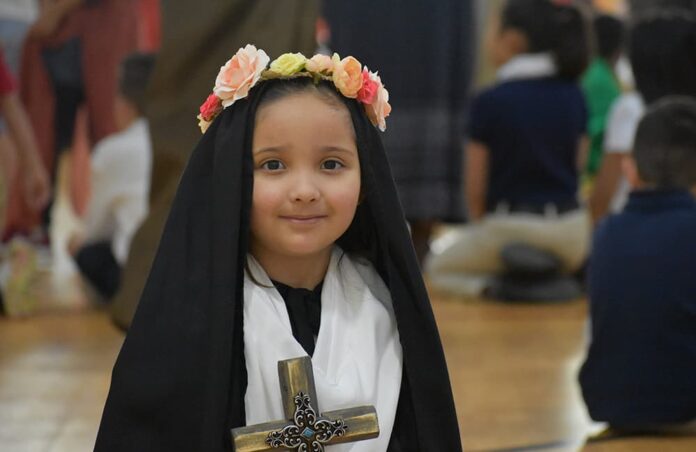 At other schools, Nov. 1 was likely just another Friday for students. At Denver’s Catholic schools, however, it wasn’t just Friday – it was All Saints’ Day.

On this special feast day, Catholic schools invite their students and teachers to participate in the communion of saints by dressing up as their favorite saints. The occasion is usually marked by class parties, fun activities and even parades around the school.

During his Angelus address at the Vatican, Pope Francis said on All Saints’ Day that “the saints of all times, which we celebrate together today, are not simply symbols, distant human beings, unreachable. On the contrary, they are people who have lived with their feet on the ground. They have experienced the daily toil of existence with its successes and its failures, finding in the Lord the strength to always get up and continue the journey.”

More than just a fun day for students, All Saints’ Day is an opportunity to remind them that they, too, are capable of holiness, and is another way in which Catholic schools live up to their name.

At St. Rose of Lima in Denver, celebrating All Saints’ Day perfectly complements the goal of preparing its students not only academically, but also spiritually.

“We believe all students are called to sainthood, and as we prepare them academically for success in Catholic high schools and college, we also prepare them for heaven,” said Tomas Gallegos, principal at St. Rose of Lima. “It’s seeing themselves as saints, praying to the saints and using that for guidance on how they should live their lives.”

Teachers and staff are also encouraged to join in the fun. Gallegos was dressed as St. Francis of Assisi, a saint that’s had a particularly special impact on his life.

“I had the opportunity to visit Assisi and go see the chapel that [St. Francis] helped rebuild and see where he’s laid to rest,” Gallegos told the Denver Catholic. “He’s someone that I pray to in a very special way, but I also think it’s a good connection for our students who already innately have a love of animals to see somebody who really embodied that.”

At St. John the Baptist School in Longmont, the preschool classes had their own celebration complete with fun activities themed after particular saints. Students sprinkled roses over an image of St. Theresa at her station, searched for lost items at the St. Anthony station, and shot a toy bow and arrow at a target at the St. Kateri station — “target practice,” as some of the students said.

Criscelda Mortimore, whose son Ambrose dressed up as St. Mark the Evangelist and is in his second year of preschool at St. John the Baptist, volunteered to help run one of the stations for the children. She likes the All Saints’ Day celebration not only because it’s fun for the kids, but also because it presents an important learning opportunity for students and parents alike.

“I really like how it opens up the opportunity for me to discuss things like [the saints],” Mortimore said. “Although I am one who considers myself to take Catholicism seriously, it can be hard to bring that stuff up in everyday activities.

“I probably would’ve never been able to discuss with him the idea of the symbol of St. Mark the Evangelist being a winged lion and that’s something that I actually learned myself too, were it not for our participation in All Saints’ Day.”

More than just the practical application of learning about the saints, Catholic schools’ participation in All Saints’ Day activities also gives students the chance to find new role models in the saints in an interactive way.

“It’s a beautiful thing for kids to have these spiritual role models that they can look to for guidance, individuals who walked the earth and had professions and families, but also chose to devote their lives to Christ,” said Sarah Grey, principal at Assumption Catholic School in Denver. “Our kids are being exposed to so many people — celebrities, athletes, individuals that are maybe not the best role models for them, so it’s a beautiful thing for them to learn about individuals who have died for their faith that they can hopefully try to exemplify.”

Rocio Madera and Vladimir Mauricio-Perez contributed to this report.