His Church. Our Experience.
Subscribe
HomeLocalSaints Among Us
Local 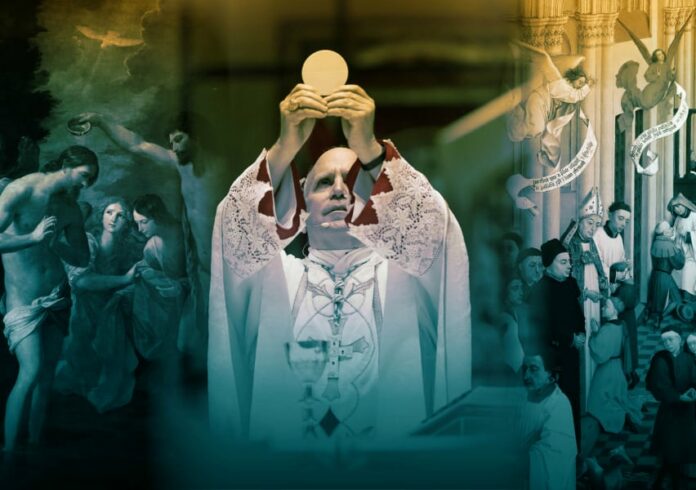 Amid the many theological and pastoral reasons for lowering the age of confirmation and restoring it to its original place before first Eucharist, none ranks higher for Archbishop Samuel J. Aquila of Denver than to provide children with much-needed spiritual strength to become “courageous, authentic disciples of Jesus Christ.”

“In an increasingly secular world,” he wrote in the pastoral letter Saints Among Us, released on the solemnity of Pentecost, “the reality is this: the souls of our children are the battleground.”

“As the shepherd of the Archdiocese of Denver, I must do everything I can to help those who form children win that battle,” he added.

In Saints Among Us, the archbishop explains that one way to do this is to “make available every sacramental grace the Church has to offer to children who have reached the age of reason [around 7 years old].”

“This is profoundly important,” he wrote, “because we live in a different spiritual terrain than our parents or grandparents did. Indeed, the spiritual landscape of modern American society underscores the need for children to receive grace earlier.”

The release of the pastoral letter marked the beginning of the process to restore the order of the sacraments of initiation in the Archdiocese of Denver so that the sacraments will be conferred as follows: baptism, confirmation and first Eucharist.

While infant baptism will continue to be normal practice, confirmation and first Eucharist will take place in third grade at the same Mass.

The change will be implemented during a five-year step-down process in which pastors are encouraged to facilitate a smooth transition according to what works best for the circumstances and size of their parish. By 2020, all children should receive confirmation and first Eucharist in third grade.

In 2012, Archbishop Aquila discussed the restored order in a meeting with Pope Benedict XVI other bishops from the United States. “You have done what I have always wanted to do,” the pope responded.

A culture of death
Theologians with connections to the Archdiocese of Denver have echoed the archbishop’s concern for the spiritual needs of children in an increasingly secular society.

“Our culture is not nice to kids,” Anthony Lilles, academic dean for St. John’s Seminary in Los Angeles, told a gathering of catechists in Denver last fall. “We have a culture of death all around us, and our young people, they are dealing with friends who are dealing with suicidal thoughts, and cutting themselves and drug addictions and sexual addictions.”

He encouraged the catechists, who were attending the Catechetical Congress of the Archdiocese of Denver on the topic of the restored order, to study the experience of the early Christians and how they “experienced the sacraments, understood the sacraments—sacraments that conferred divine live, that gave them courage in the midst of very difficult situations and circumstances.”

Scott Powell, director of Scriptural theology at the St. Thomas Aquinas Catholic Center in Boulder, Colo., told the same gathering that most Catholics misunderstand the true nature of confirmation.

“Confirmation,” he explained, “is the Church saying, ‘look, you’re baptized, which means you have a big job ahead of you, and you are going to be fed on the Bread of Life soon, but you need strength.’”

“And now more than ever, in the state of the world, in the state of ‘utter evil,’ we need strength,” he continued. “And if we can give that to young people earlier, then I say praise be to God, and I speak as a parent, as a teacher and as a catechist—all of them. I want my kids to have as much strength and grace to go through this world and this time of darkness as they possibly can.”

Theologian Jared Staudt, former professor at the Augustine Institute in Greenwood Village, wrote in 2013 that “the reception of the grace of the Holy Spirit at a younger age will give children greater courage and guidance in facing the ever-increasing difficulties of living a Christian life.”

“Waiting another five or even ten years to receive this grace unnecessarily deprives one of the grace of the Holy Spirit,” he added, “which is so vital for spiritual growth and maturity. Initiating children into a deeper relationship with the Holy Spirit at a younger age could (and should) be a stimulus for a deeper prayer life, greater participation in the life of the Church, and the formation of virtue.”