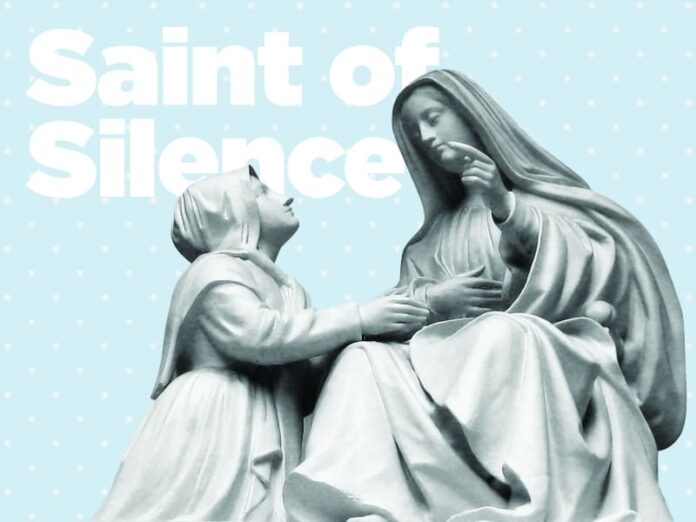 The past month has contained enough violence to snuff out all of our hope, yet we’re in Advent. We’re preparing to welcome the Savior of the World, though it is difficult to believe that this bloody rock even has a savior. After all, He speaks in a whisper, but our minds are crowded with violent news.

In times like these, it’s helpful to remember that there have been darker times in the Church’s history, and saints emerged from that darkness.  This Advent,  we propose a new look at St. Catherine Labouré,  the messenger of the Miraculous Medal and the “Saint of Silence.”

St. Catherine “Zoe” Labouré (LAH-bor-AY) is extraordinary because of how completely ordinary she was.  She was born on a farm, and essentially spent her childhood helping with and eventually running the household. She wasn’t pretty, wasn’t intellectual, and was stubborn and prone to flashes of anger.

No one would have guessed that years later, Our Lady would give her visions of a sacramental she wanted Catherine to bring to the world.

Her one remarkable quality

St. Catherine Labouré, perhaps more than any other saint, had a calm but deep trust for Our Lord and his Mother. She was steadfast in a way that only the simple can be.

Catherine lived during a horrifying time. Although she was born after The Terror of the French Revolution, additional revolutions continued to crop up. Many common people associated the clergy with the noble elite, and so terrible sacrileges would often follow the revolutions. Among these sacrileges were the desecration of the remains of saints. St. Geneviéve, patroness of France, had her remains pulled out of her tomb and burned in the street.  St. Vincent de Paul’s remains, however, were saved, and have been saved during every great uprising that shook France.

St. Catherine Labouré was in the parade celebrating the translation of his relics to Notre Dame after a bout of hiding.

How God used that

She slept for two hours. She awoke when her guardian angel, disguised as a small but beautiful child, called her. He said, “Come to the chapel. The Blessed Virgin awaits you.”

Most of us would probably either stay in bed terrified or leap to our feet and run to the chapel. But St. Catherine Labouré was, again, “the saint of silence,” and she did neither. Instead, she dressed herself in her complicated novice habit and followed the angel to the chapel.

Every candle was lit. She later said that it looked like Christmas Mass. She followed the angel to the sanctuary and instinctively knelt next to the Director’s chair.

“Here is the Blessed Virgin,” the child said.

Catherine heard only a soft rustle of silk. She turned to the sound and saw Mary coming down the altar steps. Our Lady sat in the chair. Catherine put her hands, folded in prayer, on Our Lady’s lap and looked into her Mother’s eyes. It was the tenderest moment of her life.

“My child, the Good God wishes to charge you with a mission,” Our Lady said.

But instead of telling her about the Miraculous Medal then, Mary began to tell Catherine about her life. She warned her of the dangerous times ahead and told her how she should bear them. Catherine would know unerringly the Will of God.

“Tell with confidence all that passes within you; tell it with simplicity. Have confidence. Do not be afraid,” Mary said.

And this, not the Miraculous Medal, is the most unusual event of St. Catherine Labouré’s life.

In virtually every other apparition, Mary has suddenly appeared in the visionary’s sights. However, her appearance to St. Catherine was calm and gentle. The sun didn’t dance, water didn’t spring out of a rock—she simply announced herself with the softest whisper of silk.

No other seer has been granted the favor Our Lady gave to St. Catherine—two hours of her hands in Mary’s lap, having her life explained to her.

Mary would return to Catherine shortly before the first Sunday of Advent and show her the Miraculous Medal. The subsequent visions were made for the world, and didn’t hold the tenderness of this first apparition.

It’s not accurate to say Catherine was blessed with such intimacy with Our Lady because she was a favorite. That would go against the whole purpose of the visions, which was to bring us all into deeper devotion to the Immaculate Conception of Our Lady.

The Immaculate Conception states that the Virgin Mary was conceived without the stain of original sin. She was fully human, just like Eve before the Fall, but didn’t have the effects of Original Sin in herself. She lived with a purity and an ability to love that we cannot comprehend.

When Mary appeared to St. Catherine, the Immaculate Conception wasn’t Church doctrine yet.

And what does the Immaculate Conception mean? It means that we have a Mother who loves us perfectly. St. Catherine Labouré is unique because she had an inkling of the love being offered, and she completely accepted it.

What we can learn

We live in scary times. So did St. Catherine Labouré. And yet, as she knelt with her hands in our Mother’s lap and looked into her eyes, Mary said this to her:

“The moment will come when the danger will be enormous; it will seem that all is lost…The cross will be treated with contempt, they will hurl it to the ground. Blood will flow, they will open again the side of Our Lord…My child, the whole world will be in sadness.”

And yet, Our Lady wasn’t done. She went on to say, “…At that moment, I will be with you; have confidence.”

So how do we experience that? We behave like St. Catherine. We don’t have to afraid, or restless with indignation, or even perfect. We just have to know on an untouchable level that we and everyone we encounter are perfectly loved.

That kind of knowledge isn’t rooted in platitudes or comboxes or podcasts or any of the other noise we use to fill our day. It’s rooted in a deep acceptance of something we don’t understand. It’s rooted in silence. That silence can lead to what our Holy Father has asked from us in this Year of Mercy: A revolution of tenderness.