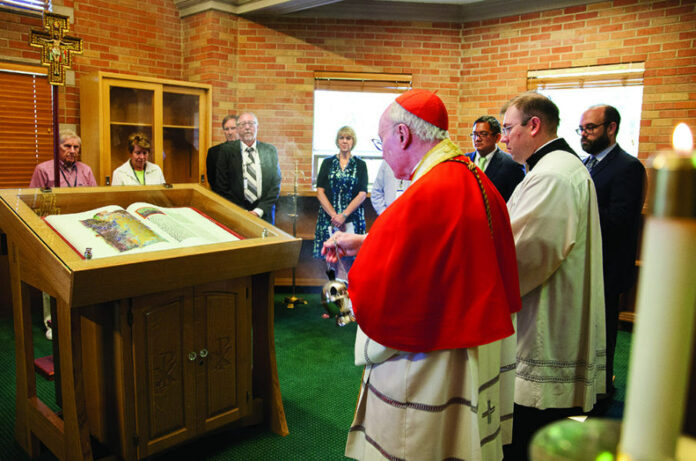 Cardinal J. Francis Stafford blessed a copy of The Saint John’s Bible: Heritage Edition during a dedication ceremony in September. “Let us pray that the Holy Spirit through this hugely significant and uniquely enriched piece of contemporary religious art will fill the vacuum in the religious imagination of postmodern peoples,” the cardinal said before the blessing.

The seven-volume Heritage Edition of the Bible was donated to the library of the seminary by anonymous donors. The set is the 24th of 299 faithful replicas of the original Saint John’s Bible that is housed at St. John’s University in Minnesota.

The original Saint John’s Bible was commissioned in 1998 by the Benedictine Monks and faculty at St. John’s Abbey and University in Minnesota, making it one of just a handful of handwritten and illuminated Bibles produced since the invention of the printing press in the late 1400s. The production of the work took place between 2002 and 2011.

The institution entrusted Welsh calligrapher and official scribe to Queen Elizabeth, Donald Jackson, with the task of crafting an illuminated Bible that would “ignite the spiritual imagination of believers throughout the world.”

According to seminary rector Father Scott Traynor, that goal aligns perfectly with the goals of seminarian formation: “We form future priests to proclaim the Word of God—to powerfully communicate the fire of Jesus’ Divine Love for every person. Accordingly, the priest’s heart, mind and imagination must first be captivated and inflamed by his holy Word.

“The love for, dedication to, and veneration of God’s Word in Scripture is uniquely evident in this beautiful work and is a great source of inspiration for our seminarians. We are most grateful and honored to receive this amazing gift and desire to share this treasure with parishes throughout the archdiocese.”

The Saint John’s Bible contains the text and notes of the New Revised Standard Version Catholic Edition translation (meaning that it contains all the Apocrypha such as the books of Tobit, and Sirach, and the Story of Susanna), which was viewed as both a theologically sound translation, as well as the most ecumenical.

The manuscript contains seven volumes that make up a total of 1,165 pages, and include 160 major illuminations (illustrations) found throughout. The volumes are divided as follows: Pentateuch, Historical Books, Wisdom Books, Psalms, Prophets, Gospels and Acts, and Letters and Revelation.

While the original manuscript was written with real quills on calfskin vellum using organic inks, the Heritage Edition is printed on 100% incited cotton paper and uses a combination of lithograph and manual painting that faithfully replicates the look and feel of the original.

Measuring two feet tall by three feet wide when open, it is the exact size of the original. Copies of the Heritage Edition are on display in over 100 locations around the world, including Notre Dame, Yale and Pepperdine universities, and the Vatican Library.

Twelve sets of an Apostles Edition have also been created, one of which was given to the Library of Congress in 2015 during the visit of Pope Francis to the United States.

The Bible donated to the archdiocese is housed in the Cardinal Stafford Library in two display cases crafted by Don Kinstetter, father of St. John Vianney alumnus Father Andrew Kinstetter, who is a priest for the Diocese of Cheyenne. One case will remain permanently in the library, the other will be able to travel to other locations.

Currently, the library displays only two pages at a time in each case, and the pages are only viewable through a protective glass. The pages are turned on a regular basis.

According the Cardinal Stafford Library staff, there will be opportunities in the future to take the Bible on tour to various parishes and schools within the Archdiocese of Denver.

To learn more about The Saint John’s Bible, visit saintjohnsbible.org.