Sacrifice, presence, communion: The Eucharist is the Sacrament of Charity 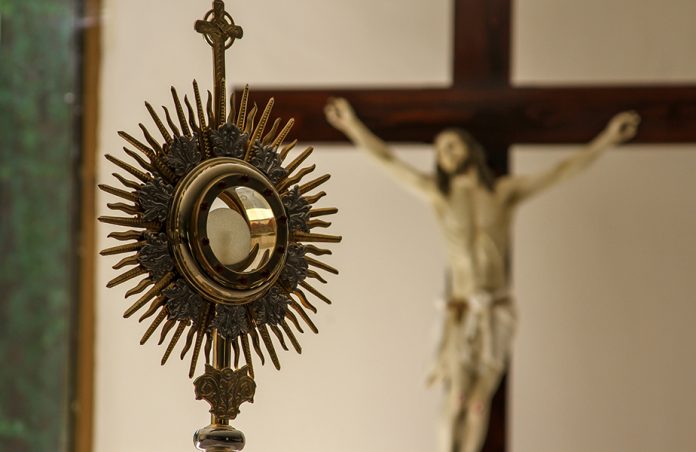 In the very beginnings of the Church there were no sacred buildings. The first Christians did not have books, not even the Bible. What made the Church exist is still today the heart that gives her the most essential flow of life, more than any laws, institutions, or plans. This heart is not a thing, but a Person: Jesus Christ, truly present in the Eucharist. And while there are many more things that have developed over the centuries, the heart is still the same, and there we find the source of charity.

The Eucharist is the sacrament of charity not mainly because in it we remember the love of Christ and try to imitate it, but because in it God continues to give us his love. Just as he loved his chosen people and promised to keep his love and fidelity forever, and just as that promise was fulfilled in the Incarnation, which led to the love to the end of the Cross, so that same love continues to come to us through the sacraments. Joseph Ratzinger said: “He became flesh so that He can become bread.” God gives us his love in a way that no one could have imagined. There is no possible human intuition of the Eucharist because we simply cannot conceive so much love. In this sacrament we receive not only the supreme example of charity, but charity itself.

There are three ways in which the Eucharist can be seen as the sacrament of charity: sacrifice, presence and communion.

An ancient prayer (ca. 5 A.D.) that we still say today at Mass reveals the power of the sacrifice of the Eucharist: “Whenever the memorial of this sacrifice is celebrated the work of our redemption is accomplished.” Every Mass is the accomplishment of our redemption — if we only thought more about this! The Eucharist is the renewal of the sacrifice of Calvary: the Cross is the infinite fountain; each Mass is a stream that waters the world.

This reminds us of a central point that has been often forgotten. The key for an authentic and truly active participation at Mass is not how many things we can do, how many external roles we can play, but learning to offer the sacrifice with love. Entering the sacrifice of Christ, joining our own sacrifices to his, we learn also to “become sacrifice,” as St. Augustine boldly said: we who “continually celebrate the sacrament of the altar” must also continually offer to God “on the altar of our heart, the sacrifice of humility and praise, kindled by the fire of love.”

The sacrifice of the Eucharist brings the loving presence of God. It is so common to think or hear people sharing about the romantic nostalgia of not having met Jesus as the first disciples did. Of course, if only we had spent some of those intimate evenings with him next to the Sea of Galilee, our life would be so much better, right?

But we don’t “get less” of Jesus’ presence. St. Ignatius of Antioch said on his way to his martyrdom: “Our God Jesus Christ, since He is in the Father, is all the more visible.” We can see Jesus more than those few who spent some days and nights with him in Galilee! We can be with him because of that sacrament that St. Ignatius called the “the bread of God, which is the flesh of Christ; his blood, which is incorruptible charity.”

In the incorruptible charity of the Eucharist, the presence of God is not restricted to the limitations of time and space assumed by the incarnation. The Lord is truly present in every altar, in every tabernacle. Indeed, “what other nation is so great as to have their gods near them the way the Lord our God is near us whenever we pray to him?” (Dt 4:7).

The charity of the Eucharist penetrates our beings in yet another surprising way. Christ does not only want to dwell among us. He wants to dwell inside of us. This is true spousal charity: complete spiritual and physical union.

Who would have thought that God could be in us, especially in those few moments where his real presence remains before the accidents of the sacrament disappear? But the good news is that this sacramental union does not vanish: the Eucharist causes the enduring effects of sanctifying grace, charity and the indwelling of the Trinity. Could there be any reason for despair when God is not only with us, but in us? Perhaps this is what Paul had in mind when he wrote: “Christ in you, the hope for glory” (Col 1:27). ⊲

Breathing the fire of love

The charity of the Eucharist will always be there, but its personal fruits depend on our disposition. The Eucharistic Revival is a good occasion for us to renew our disposition to fruitfully receive this charity.

The charity infused in us as we participate of the sacrifice of the Mass and — if we are so blessed — receive Holy Communion, can and must make us better disciples and more courageous apostles. Mass has to make us different, as St. John Chrysostom said: “Let us then return from that Table like lions breathing fire, having become terrible to the devil, thinking about the love which He has shown for us.” This is the surprising power of the sacrament of charity: when Christ is in us, we breathe the fire of love and become terrible to the devil. With this grace, we can become saints, we can set the world on fire.

To coincide with the archdiocesan Advent preaching series, this article is part of a series about The Eucharist as the Sacrament of Charity.