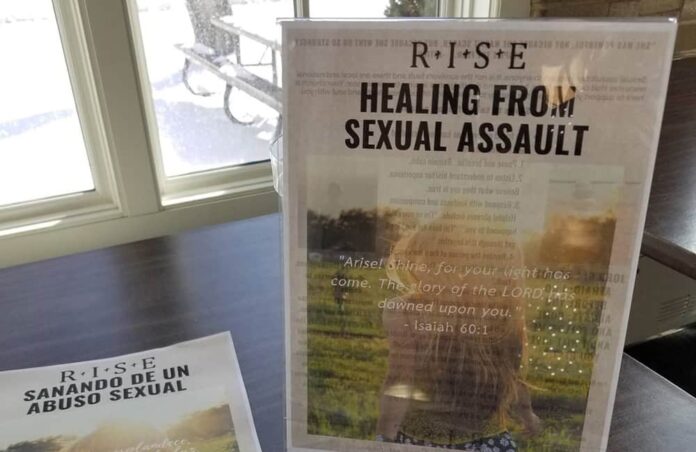 The statistics are sobering: one of every six American women has been the victim of an attempted or completed sexual assault, and 60% of rapes/sexual assaults are not reported to police.

In addition to those numbers cited by crisis-intervention agency OurVoiceNC.org are these by Rape, Abuse & Incest National Network (RAINN.org): 94% of women who are raped experience symptoms of PTSD during the two weeks after the assault, and more than a third of women who are raped contemplate suicide. Victims are at greater risk for a host of other ailments, as well, including depression and drug and alcohol abuse.

A new ministry of the Denver Archdiocese called “RISE” (Recognize, Intervene, Speak up, Empower), aims to bring holistic healing to such women.

“It’s a grassroots apostolate which is the first in the country as far as we know to provide a faith-based accompaniment to survivors of sexual assault,” said Deacon Ernie Martinez, a 36-year Denver police officer who helps lead the program. “Because of the vast numbers, everyone knows someone who’s been sexually harassed or assaulted. We want to say: We have these tools and these resources to assist you.”

A variety of secular entities exist that are dedicated to supporting survivors psychologically, emotionally and physically, which helps them to cope, said Deacon Joe Donohoe, initiator and director of the RISE ministry and director of deacons for the Denver Archdiocese.

“But you need God to heal,” he said, referring to the ministry’s inclusion and focus on spiritual recovery. Deacon Donohoe’s office oversees the apostolate.

Evil and the Cross

In school settings, too, RISE is reaching out to victims of sexual violence. In her pro-life work with Students for Life, Deacon Martinez’s daughter Lauren Castillo saw firsthand the need, particularly on high school and college campuses, for faith-based support for survivors of sexual assault.

“I was blown away by the amount of times on a school campus when someone would confide in me and say, ‘I’ve never told anyone, but I was raped’ or ‘I was sexually assaulted,’” she said. “When my dad told me about the idea for this apostolate, my heartstrings were stirred.”

Castillo jumped on board and helped create the apostolate’s mission and materials.

“Oftentimes, survivors of sexual assault feel their dignity is stripped from them. They feel broken, unwanted and that the assault is their fault,” she said. “We had a big brainstorming session where we delved into the [apostolate’s] mission, and I had in my mind the scripture from Isaiah 60: ‘Arise! Shine, for your light has come; the glory of the Lord has dawned upon you. The children of your oppressors shall come, bowing before you; all those who despised you shall bow low at your feet.’”

“That inspired our mission to affirm the inherent human dignity survivors of sexual assault have,” she said, “and to advocate for their holistic healing through education, counseling partnerships and training of Church leadership.”

The horror of rape begs the question of why God allows such evil — or really any evil at all — to occur in the first place. The Catechism of the Catholic Church says God permits evil “because he respects the freedom of his creatures and, mysteriously, knows how to bring good from it” (311) and that through our faith we know how God accomplishes this good “by ways that we shall fully know only in eternal life” (324).

“Evil does exist in the world, but we know God triumphs over evil,” Deacon Martinez said. “As a policeman, I see it every day. People call us because they’re in crisis. A lot of times, eventually, we find out there’s something good that comes out of it — bringing people closer together, bringing people to prayer and closer to God … so many graces.”

We had a big brainstorming session where we delved into the [apostolate’s] mission, and I had in my mind the scripture from Isaiah 60: ‘Arise! Shine, for your light has come; the glory of the Lord has dawned upon you. The children of your oppressors shall come, bowing before you; all those who despised you shall bow low at your feet.’”

Understandably, however, after the trauma of sexual assault, a survivor’s first reaction is often anger at God, Deacon Donohoe said.

“We help them recognize that God is not the culprit. There is evil in the world,” he said, “but God brings in the good.”

The RISE logo depicts the letters of the acronym separated by three crosses, each stylized as perpendicular ashen streaks, to point to the power of Christ who died and rose to vanquish death and evil.

“Those Lenten ashes between the letters are the wounds the survivors feel,” Deacon Martinez said. “We are accompanying them to rise up out of those ashes, that desert, to the new life of Easter.”

According to Deacon Donohoe, RISE seeks to  accompany surivivors by connecting them with clergy spiritual support, psychological counseling grounded in Catholic teaching and medical attention, and by helping survivors navigate the criminal-justice system.

“We walk with them and we get them the proper assistance, depending on where they are in the process — some cases are 20 years old; some are recent,” Deacon Donohoe said of the eight survivors who have been helped by the apostolate since its launch in January. “We provide the tools necessary to heal.”

“There’s a cadre of people who are knowledgeable, expert, in how to manipulate people and assault them. We want to be able to warn people and let them know,” Deacon Donohoe said.

RISE is committed to building awareness and aiding prevention through training Church leaders how to respond to and aid survivors.

“We’ve had two successful trainings and have trained 25 people so far,” Deacon Martinez said. “We will schedule more in the near future. The trainings let people know what to do when someone comes to them and says, ‘My daughter was sexually assaulted,’ or ‘My friend was assaulted,’ or ‘I was assaulted.’”

The RISE website (RISEaod.org) also outlines how to help someone who has been assaulted and includes advice and resources for survivors. Prevention tips providing at the site include:  “Recognize that alcohol is the most commonly used method for drug-facilitated sexual assault. Be aware of your surroundings when using alcohol. Learn the warning signs (e.g., difficulty breathing, nausea, disorientation).”

The RISE website also advises bystanders: “Talk to the person you are concerned might have been drugged and ask them if you can stay with them or help them. Talk to a police officer, security officer or bartender. Call 911 if you see anything suspicious, and don’t put your own safety at risk.”

Survivors and witnesses are urged at the RISE website to speak out against the injustice of sexual assault. RISE encourages survivors to know they are not at fault, they can rise above the violation, and they have the power to seek legal justice against the assailant.

“We are striving to create a culture where survivors of sexual assault feel welcomed in our parish communities, where they feel supported and feel protected,” Castillo said. “To do that, we need to be in our churches advocating for better responses from our parish staffers, equipping them and offering visible outreach.”

Because of the apostolate, Deacon Martinez said, survivors can be told, “People in your local parish and the Archdiocese of Denver know how to help you with Christ-centered healing.”

In addition to the training of Church leaders, the apostolate aims to offer age-appropriate messaging to Catholic schools and college campuses.

Beyond the Catholic community, RISE has reached out to ridesharing entities regarding awareness and prevention and plans to expand such outreach to tavern and restaurant employees to create awareness and promote bystander intervention. To that end, RISE has engaged in dialogue with state officials and recruited Jennifer Kraska, state lobbyist for the Colorado Catholic bishops, to draft a resolution to build statewide awareness of the issue of drug- and alcohol-facilitated sexual assault.

“It’s not talked about enough and recognized as the problem issue it is in our society,” Kraska said. “There needs to be a lot more education around the issue and support for victims of this kind of assault.”

We are striving to create a culture where survivors of sexual assault feel welcomed in our parish communities, where they feel supported and feel protected. To do that, we need to be in our churches advocating for better responses from our parish staffers, equipping them and offering visible outreach.”

The establishment of RISE, Kraska said, increases the likelihood of securing a resolution sponsor in the state legislature. Should a resolution of support be adopted, it would highlight the issue statewide and hopefully spur education, prevention and victim aid initiatives.

“Women especially are afraid to talk about these issues,” Kraska noted. “They feel shame and guilt, and so they suffer in silence. To know this resource is available to them is vitally important.”

Expressing gratitude to the Denver Archdiocese, to their Catholic counseling center partners — the parishes of St. Raphael (Roman Catholic) and Mount Tabor (Eastern Catholic) — and to Kraska and the bishops of Colorado, the RISE leaders are enthused about the support the apostolate has received and the healing taking place through the ministry.

“In my own experience, it was in the confessional that I first saw love and acceptance after my rape, and it was the Church that brought me true healing after many years,” states one anonymous testimonial. “The priest … explain[ed] that being raped wasn’t a sin, that God loved me, that I was just as whole and pure as before I was attacked. That priest, knowing how to pastorally care for me, honestly saved my life.”

Deacons Donohoe and Martinez note that their ministry was initiated before the anti-sexual harassment/assault “MeToo” movement and the now-laicized Theodore McCarrick sex-abuse scandal emerged.

“It’s been a slow process because it’s grassroots,” Deacon Martinez said. “But we’re up and running and hoping to grow.”

He emphasized that RISE is a Christocentric approach to healing.

“It’s opening the door to the light of God. … To know his warmth is going to heal [survivors] deeply with the understanding of his love,” Deacon Martinez said.
As survivors are supported, they may opt to share their stories with others through the apostolate to increase awareness and prevention, further their own healing and empower others, thereby helping God to bring good from the evil that was done, Deacon Donohoe said.