His Church. Our Experience.
Subscribe
HomeLocalRiding across America for persecuted Christians in the Middle East
Local

Riding across America for persecuted Christians in the Middle East 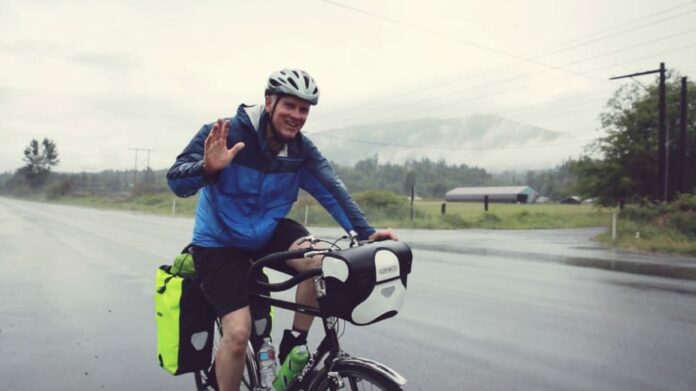 On Monday, June 13, Skip Rodgers dipped the back tire of his steel-frame touring bike into the Pacific Ocean in Anacortes, Wash., 93 miles south of Vancouver, B.C., settled onto the seat, and began a trek of over 3,400 miles across the northern tier of the United States. His goal is to dip his tire in the Atlantic Ocean in Bar Harbor, Me., around August 9.

Why did 59-year-old Skip Rodgers take on this challenge which he calls the Ride for Hope and Mercy?

He just had to do something about the plight of the persecuted and displaced Christians fleeing violence in the Middle East, he explained.

The seed of the idea took root after Rodgers went to St. Rafka’s Mission of Hope and Mercy Conference at Regis University in Sept. 2015. There, Father Andre Mahanna, who was brought up in Lebanon and is pastor of St. Rafka Maronite Church in Lakewood, Colo., was part of a panel on religious persecution in the Middle East.

“I left there feeling we should something besides wearing the Nazarene pin,” Skip said. “I started thinking about doing something more. At the same time Father John Hilton at age 60 last year was riding across America to raise money to build a retreat center at his church.” He is pastor of St. Mary’s Catholic Church in Aspen, Colo. That watered the seed of inspiration for Skip.

Then driving to Mass and “realizing the freedom we have in the United States to attend Mass without being persecuted and facing death,” Skip believed that we should “take every opportunity to involve ourselves in the Church, and the Mass, and the sacraments because of the opportunity we have here.”

Everything added up—he was going to ride across America to tell as many people as he could about the plight of the Christians in the Middle East and to raise as much money as he could for St. Rafka’s Mission of Hope and Mercy, which supports many several missions in Lebanon for Christians who fled there.

Rodgers’ route, which he named Ride for Hope and Mercy after St. Rafka’s mission, will take him through Washington, Montana, North Dakota, Minnesota, Michigan, and Ontario—then it will touch the northern tip of New York, back into Canada and Montreal, and finally across Maine to the Atlantic.

This story was written by Joseph Pronechen for the National Catholic Register and is reprinted with permission.  Click here to read the full version. Click here to learn more about helping Christians in the Middle East.