His Church. Our Experience.
Subscribe
HomeLocalRessourcement for Confirmation
Local 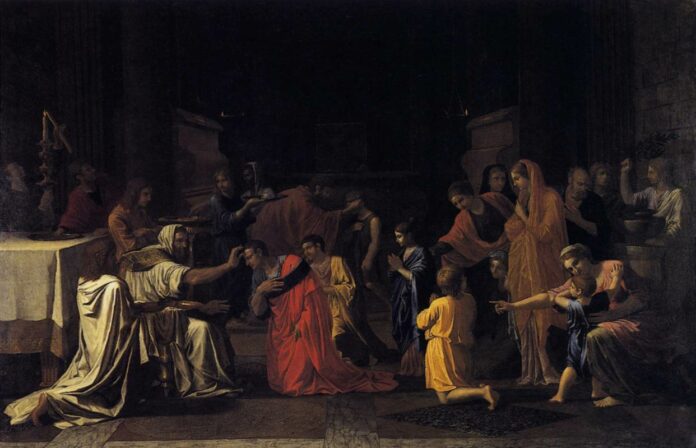 This article was originally published in The Sower and is reproduced here by permission.

1. The unity of the sacraments of initiation
First, I would like to emphasize that the traditional order of the sacraments of initiation until recently has always been baptism, Confirmation, and then Communion. The Code of Canon Law (842 § 2) makes clear that “the sacraments of baptism, confirmation, and the Most Holy Eucharist are so interrelated that they are required for full Christian initiation.” This interrelation ties the three sacraments so closely together that they can be seen as one initiation into the life of Christ in the Church, “whose unity,” the Catechism enjoins, “must be safeguarded” (§1285). This is the reason why all three are bestowed at one time even upon children in the Eastern rites of the Catholic Church and upon adults in the Latin rite after the completion of RCIA. Though restored order Confirmation does not confer all three sacraments at the same time, it does draw them closer together by conferring Confirmation closer to baptism and simultaneously with the Eucharist.

2. The logical progression of the sacraments of initiation
The Eucharist is the consummation of the sacraments of initiation and the very “source and summit of the Christian life.”4 Confirmation should follow baptism, because it is understood as a completion specifically of baptismal grace. The Catechism states that “it must be explained to the faithful that the reception of the sacrament of Confirmation is necessary for the completion of baptismal grace.”5 After baptismal grace is strengthened, the next and final step of initiation is entering into communion with Christ, which most perfectly anticipates the eternal vocation of union with God in the beatific vision. The first two sacraments lay the ground for and enable the union with Christ that is found most fully in the Eucharist (the only Sacrament, which is Christ Himself, and is therefore the greatest sacrament). Indeed, St. Thomas Aquinas teaches that “the Eucharist is, as it were, the consummation of the spiritual life, and the end of all the sacraments … for by the hallowings of all the sacraments preparation is made for receiving or consecrating the Eucharist.”6 Therefore, having received Confirmation, the first communicant will approach our Lord strengthened by the grace of the Holy Spirit, which will aid in making a more perfect reception.

4. Confirmation as bestowing spiritual maturity, which does not require physical maturity
Confirmation is defined as a sacrament which “impresses a character and by it the baptized, continuing on the path of Christian initiation, are enriched by the gift of the Holy Spirit and bound more perfectly to the Church; it strengthens them and obliges them more firmly to be witnesses to Christ by word and deed and to spread and defend the faith” (Code, Can. 879). There are two essential elements stemming from this definition. The first is a permanent imprint on the soul (a character), which completes and strengthens the grace bestowed at Baptism. The recipient of the Confirmation sacramental is fully initiated into the sacramental life of the Church and, furthermore, is strengthened by the grace of the Holy Spirit who works within the soul in His seven gifts.

The second element shows the ordering  of this grace toward the active role that every Christian must undertake to witness, defend, and spread the faith. The interior life of grace is meant to lead to a mature outward manifestation. It is on account of this second element that many have desired to move the sacrament to adolescence so that the recipient may be more readily disposed to fulfill the outward duties of the sacrament. We hear this sentiment expressed in the common definition of Confirmation as “becoming an adult in the Church.” The Catechism cautions against interpreting this adulthood too literally. It states:

“Although Confirmation is sometimes called the ‘sacrament of Christian maturity,’ we must not confuse adult faith with the adult age of natural growth, or forget that the baptismal grace is a grace of free, unmerited election and does not need ‘ratification’ to become effective. St. Thomas reminds us of this: ‘Age of body does not determine age of soul. Even in childhood man can attain spiritual maturity: as the book of Wisdom says: ‘For old age is not honored for length of time, or measured by number of years’ (Wis 4:8). Many children, through the strength of the Holy Spirit they have received, have bravely fought for Christ even to the shedding of their blood.”‘7

Confirmation does not require an adult decision to join officially the Church; it is rather God’s grace binding the recipient more fully to Christ and the Church. In regards to spreading and defending the Church at a young age, the quote from Aquinas affirms that children have done so, but even if this was impossible due to age, the grace to do so would be present and ready when the opportunity arose (as happens with baptismal grace).

5. Need for grace at an earlier age
The reception of the strengthening and maturing grace of the Holy Spirit at a younger age will give children greater courage and guidance in facing the ever increasing difficulties of living a Christian life. Waiting another five or even ten years to receive this grace unnecessarily deprives one of the grace of the Holy Spirit, which is so vital for spiritual growth and maturity. Initiating children into a deeper relationship with the Holy Spirit at a younger age could (and should) be a stimulus for a deeper prayer life, greater participation in the life of the Church, and the formation of virtue.

6. The creation of obstacles
The next point is similar to the previous one. Confirmation is essentially a sacrament of docility to the Holy Spirit. The gifts are dispositions, which allow the Spirit to act in and through us.8 In order for the grace of the sacrament to be operative in the life of the one receiving it, it is necessary that obstacles opposed to this grace be removed. Many obstacles to the reception of the grace of the sacrament (even if they do not impede the imposition of the character on the soul) arise in the teenage years: vices, sins, and other bad habits and dispositions, picked up at an ever earlier age, and also the general lack of respect for authority, religion, and tradition.

Speaking of the reception of the character and grace in baptism (though it applies equally to Confirmation) and the hindrance of insincerity, Aquinas states: “When a man is baptized, he receives the character, which is like a form; and he receives in consequence its proper effect, which is grace whereby all his sins are remitted. But this effect is sometimes hindered by insincerity. Wherefore, when this obstacle is removed by Penance, Baptism forthwith produces its effect.”9 Therefore, insincerity, which means approaching the sacrament without the right disposition or without removing impediments, hinders the reception of the grace of the sacrament. Receiving confirmation at an earlier age makes it more likely that a docile spirit will be found in the child and also that serious impediments will not yet have been formed.

7. Improper catechetical approach
Finally, placing confirmation at a later age has created a catechetical environment that uses Confirmation as an incentive to keep children active in the parish catechetical program. While it is important to keep children engaged, rather than providing a dynamic program, it becomes too easy to simply use the sacrament primarily as a means to ensure participation at parish events.10 This creates the wrong attitude toward the sacrament, which is seen as a “hoop to jump through” and often as a graduation ceremony. Confirmation preparation is also being used as a last attempt to fill all of the catechetical gaps that have not been addressed during previous years (either because there has been no participation since first communion or because the program itself has been ineffective). This gives Confirmation programs a lack of focus without sustained catechetical treatment of the Holy Spirit, the actual sacrament of Confirmation, and the gifts of the Holy Spirit (all of which are normally treated in passing). Confirmation preparation attempts to accomplish too many things, if not everything, while it should be more of a focused time of catechetical and spiritual formation oriented toward coming to know the Holy Spirit and how to be docile to Him.

Conclusion
Restoring the order of the sacraments of initiation can serve as an opportunity for a twofold renewal in catechesis. First, it will restore the proper spiritual dynamism intrinsic to the sacraments themselves: Confirmation completes Baptism and both of them point toward the Eucharist as their consummation. Secondly, it can provide an opportunity for a renewal of Confirmation programs. The Catechism speaks of the proper focus needed for these programs:

“Preparation for Confirmation should aim at leading the Christian toward a more intimate union with Christ and a more lively familiarity with the Holy Spirit – his actions, his gifts, and his biddings – in order to be more capable of assuming the apostolic responsibilities of Christian life.”11 Rather than exclusively focusing on general content, Confirmation preparation needs to make possible the formation of a deeper relationship with Christ and also especially with the Holy Spirit. It needs greater focus, expounding in much greater depth on the realities associated with Confirmation, and must create opportunities for moral and spiritual growth to complement what is learned.

Certainly this process will present certain challenges for parishes. Catechetical programs will have to reevaluate their structure and focus more on Christian discipleship: living out the sacraments of initiation within the life of the community. They must serve as a means of learning how to live the Christian life. This is a great opportunity for the reinvigoration of catechesis. Rather than keeping children within the catechumenate for a long period of time (basically keeping children in a prolonged stage of incompletion), catechetical programs should rather take their bearings from the mystagogical stage of catechesis, deepening the understanding and expression of what has been received. If parishes can effectively overcome the obstacle of reorganization, restored order Confirmation may be an important part of catechetical renewal, bringing about a ressourcement of the way this Sacrament is conferred and hopefully also in the way in which it is received.

R. Jared Staudt, Ph.D. is Coordinator of the Catholic Studies Program at the University of Mary in Bismarck, ND. He earned his BA and MA in Catholic Studies at the University of St. Thomas in St. Paul, MN and his PhD in Systematic Theology from Ave Maria University in Florida. Staudt served as a Director of Religious Education in two parishes, taught at the Augustine Institute in Denver for five years, and served as co-editor of the theological journal Nova el Vetera. His main interests are on the relation of faith and culture and the theology of St. Thomas Aquinas. He and his wife Anne have five children and he is a Benedictine oblate.