His Church. Our Experience.
Subscribe
HomeLocalEvents'Repent for Past Wrongs, Heal Past Hurts:' Archdiocese hosts webinar to discuss...
LocalEventsFeatured 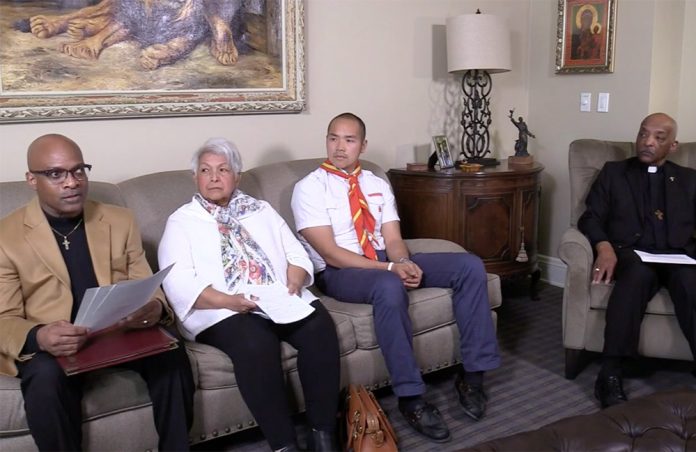 “The Archdiocese of Denver proclaims that it exists so that ‘in Jesus Christ all may be rescued and have abundant life for the glory of the Father.’ Friends, we must realize that for too many, a block to this abundant life is racial prejudice,” said Danielle Brown, Esq., the Associate Director of the Ad Hoc Committee Against Racism of the United States Conference of Catholic Bishops (USCCB), during the June 14 “Acknowledging the Sin of Racism” webinar.

Brown, a guest of the Archdiocesan Committee for Racial Equality and Justice (ACREJ), issued her challenge to attendees to examine their consciences and fight for “the breaking down of barriers that block human freedom, flourishing, access to Truth, Goodness, and Beauty, all of which have their origin in and are superabundant in Christ.”

Her challenge came at the end of the hour-long webinar in which three ACREJ committee members shared their experiences with and reflections on racism.

“My parents and friends — if we were shopping — we were often followed. It was pretty obvious that we weren’t trusted in those spaces,” said K.C. Matthews, a parishioner at Curé d’Ars Parish in Denver. Originally from St. Louis, Missouri, Matthews powerfully recounted his experiences of prejudice and racism in the judgments, preconceptions and even violence of others all while sharing some of the lessons learned with his audience.

“My parents wanted it to be clear to us that not every white man was against us,” Matthews said. “But they also taught us that racism is no longer someone carrying a torch, putting crosses on your lawn, or wearing a white hood. It could be dressed up in a suit, toting a briefcase, maybe sitting in the cubicle or office right next to you. So, it tended to be more covert. You had to keep your eyes and ears open and pay attention. And we became naturally suspicious and distrustful.”

Sharing from her own experience, Marie Ramos Beeler, a parishioner of Spirit of Christ Catholic Community in Arvada, picked up on this more covert racism and prejudice as she spoke about her own family upbringing and how they have experienced it. “I was fortunate to have had a family that showered me with love and kindness and treated me like the most important person in the world. But I had no idea as a small child that there would be times in my life that I would be made to feel like I was a second-class person not worthy of opportunities to better myself.”

Being made to feel small, unimportant and unworthy caused Beeler to buckle down and try to prove herself, she recounted. “I put a lot of stress on myself just to prove to others that Mexicans were capable and worthy of promotions and equality in the workplace. I even became a workaholic.”

This shaming over one’s heritage seemed to be a common theme among those who shared. “[There were times] where I would feel a type of shame for being Vietnamese, of my heritage, where my family comes from,” said John Pham, a parishioner of Queen of Vietnamese Martyrs in Wheat Ridge.

“My parents, being unfortunate bystanders of what was going on because of the war, lost their homes in Vietnam and had to come to the U.S.,” he continued. “My dad has told me some horrible, horrible stories from when he first came over here because there was so much anger because of the war. I think, after a while, I started to realize that in Colorado, it was spoken that ‘Hey, we’re accepting. We’ll take you in and accept you for who you are.’ But that wasn’t really true. I think embracing who I was, my parents and I embracing our culture, we realized that it makes people uncomfortable or biased in the sense that they don’t want to be inconvenienced by it, so they ignore.”

At the conclusion of the panel’s powerful and poignant sharing, the rest of the ACREJ was touched, impressed by their candor and pleased by the attendees’ engagement.

“We thought the webinar went well and had a positive reaction,” said Wanda and Deacon Clarence McDavid. “We received three messages right after the webinar aired. All were very positive and stated the webinar was well done and acknowledged how difficult such a discussion is. Other comments also stated the panel was very powerful and the stories shared by the panelist were very sad.”

“Some comments I received,” said Beeler, “were, ‘it is about time that these subjects are bought to the forefront by the Church;’ ‘the testimonies that were heard are a sad testament to the state of race relations in this country;’ and ‘we are looking forward to the next webinars.’”

Some attendees, though, were left wondering what is next after this webinar, and how they might live out the lessons learned from the panelists’ experiences. Of course, as Pope Francis has said, “no one will ever openly deny that [marginalized people] are human beings, yet in practice, by our decisions and the way that we treat them, we can show them that we consider them less worthy, less important, less human” (Fratelli Tutti, 39). So, they asked, how might the attendees of this webinar act in such a way as not to convey this un-Christian message?

“They can put themselves in environments where they can see, talk with, and experience cultural events, even Liturgy, with people of another culture,” suggested Sister Marion Weinzapfel, CSJ.

Other suggestions included discussing the topic with people of color; examine one’s own biases and confront them in order to move in a more educated and positive direction; and read and take to heart the USCCB’s pastoral letter, “Open Wide Your Hearts.”

In order to accompany others that might begin, continue, or renew this process of confronting racism and prejudice in their own lives, the ACREJ plans to continue to host webinars reflecting on the many facets of the insidious sin of racism.

André Escaleira, Jr.
André Escaleira is the Digital Media Specialist for the Archdiocese of Denver. Originally from Connecticut, André moved to Denver in 2018 to work as a missionary with Christ in the City, where he served for two years.
RELATED ARTICLES
Around the Archdiocese

On the fence about the SJV Lay Division? Attend a free talk and see what you’re missing!

New life and the gift of accompaniment

Victory, mourning and the road ahead in post-Roe Colorado